Sae Hoon is standing at the top of a vertiginously long escalator that leads down and away from Yongsan Station. He does not know how he got there, though he does remember that the train he was on stopped, and the conductor announced that it wasn’t going any further. The bottle of soju in his hand is nearly empty; it isn’t the first one he’s had today. In the beginning, man drinks wine, but in the end, wine drinks man. He laughs, thinking of the old proverb, as if someone has spoken it to him aloud. He is in Sinyongsan, and it is bitterly cold, cold like only a city can get, when all the buildings and their heating systems and all the people and their exhalation and all the cars and their exhaust do nothing to take the chill from the air. Above, a techno rendition of Jingle Bells blares out from unseen speakers to an audience that doesn’t exist. The dancing lights on the façade of the I Park Mall fade in and out of focus in his bleary stare as he descends to street level. It’s beginning to look a lot like Christmas, he hums to himself, and laughs again. He loosens his tie, which suddenly feels quite constraining. 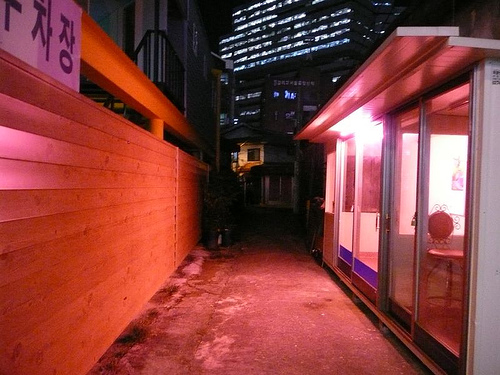 Almost no one is around. Below, a few couples scurry back and forth, arm-in-arm, across the wide open space of the square abutting the station/shopping center complex. The plaza is bathed in the reds and greens of yuletide lights. On the street, stalls offering tteokbokki and mandu are open, but they are devoid of business. As Sae nears them, he contemplates stopping to feast on a few fishy treats pulled from the depths of an odeng, then decides against it – drunk dining doesn’t do anything but give him more to cough up later on in the night.
Where should he be right now? With Her, of course. They would be home by this hour. They would have had dinner, perhaps something traditional, perhaps the buffet at the Ritz-Carlton. She liked that. They would probably have shared a bottle of wine, they would probably have made love. Or perhaps she would have been too full to let him. Still. He tries to remember the smell of her hair. It is too cold to smell anything besides his own breath.
He knows where he is going, but he doesn’t want to admit it to himself. He is an alcoholic who has found himself inside a bar, a gambler in front of whom a casino ‘miraculously’ appears. The reds and greens dissolve into the neon pinks of the working women’s district. He parts the blue plastic curtains that make a halfhearted effort to cordon off the zone from the rest of the world and obstruct the view within from those without. He enters a place where the lights are on all year long, Christmas or no.

What is She doing right now? She has married another, he heard. She stopped answering his calls. She sent him a text message, politely telling him that she didn’t think they should talk anymore. He showed up at her house, then, one night, drunk. Her father answered the door, a retired army general, an austere, broad man of nearly 60. Sae started to speak; the general’s steely stare stopped him mid-sentence. They looked at each other in silence for a little while. Then the old man offered: ‘Stop waving after the bus has left the station’. He closed the door, with a slight nod. This was some time ago. 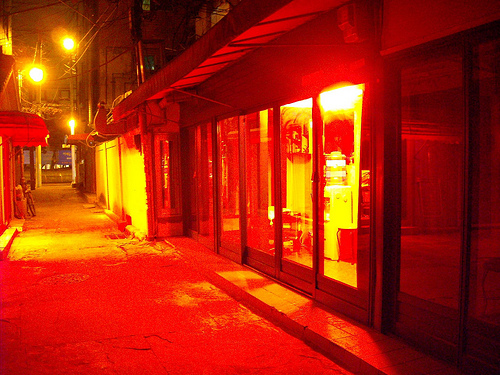 In a drizzle, you don’t realize you’re getting wet. Perhaps Sae had constructed a future for the two of them where one was never meant to exist. Perhaps the difference in their age and class, the difference in their likes and dislikes, perhaps these things should have mattered. Perhaps he shouldn’t have even agreed to meet her when a co-worker offered to fix him up. But he was some years into his thirties, working 70 hour weeks, and he needed to think about a figure that wasn’t related to sales for a change. Maybe he thought he could sell her on the idea of a Them. Maybe he thought he could buy his way there. Maybe he’s gone over all of this so many times before in his mind that at this point having the thoughts again is like throwing a stone in the Han River.

He walks down the main drag. Many of the curtains are already drawn; he is not the only person in Seoul who doesn’t want to be alone tonight. He finishes the last of the soju in his bottle, and places it neatly down in the middle of the street, because he can. He reaches the end of the row without seeing anything he likes. Maybe he’s just window shopping. Maybe he’s looking for a girl who looks like Her, so he can let his mind wander for a little while. He’s been seeing Her all over town recently. If you see someone everywhere, it means you either love them or you are afraid of them, he’s heard. Or perhaps both. Maybe he should just call it a night, and take a taxi home. He turns down a side street.

Two cats fight or fuck in the darkness; the sounds are indistinguishable. He hears the saccharine wail of a pop song wafting over the high concrete dividing wall which separates this alleyway from the rest of the neighborhood. Voices raised in drunken carousal toast one another and celebrate the season, people having fun that is less illicit, more socially acceptable. Though likely some of them will find themselves here later, after last call.
He turns a bend in the road and sees an impish, long-haired girl in a red halter top, black lycra pants, and a Santa Claus hat. He stops. She smiles. It takes a second for Sae to realize she is looking at him, though she couldn’t really be looking at anyone else. He blushes. He’s not sure why. He approaches her and she slides her glass door open a few inches. “Have you eaten yet?” she asks. “I haven’t eaten in a long time,” he tells her, looking down. Wordleslly, she leaves the door open, turns, and walks through the curtain behind her. He follows clumsily, forgetting to slide the door closed behind him. “Is your tail not in?” she calls out, feeling the draft. He excuses himself with a bow she can’t see, and turns to close it all the way.

The fluorescent light on the ceiling in her room is pink, the linoleum floor is pink, the floral-print bedspread is pink, and she tells him her name is Tae Young and asks him for the 70,000 won up front. Sae fumbles for his wallet, gets it, extracts the bills and pushes them in her direction like an underage child buying alcohol. “Please,” she says, gesturing to the bed. She takes off all her clothes in two simple sweeping motions. Almost like she’s done this before. This girl looks nothing like Her. “Could you,” Sae starts,”leave the hat on?” She giggles and picks it up off the floor. “Why don’t you wear it, ajosshi?” she asks, pulling it over his head, nearly knocking off his glasses in the process.

Watching her head move metronomically up and down above his crotch in the full-length mirror that lines the wall, he thinks about Her. She wouldn’t do this unless she was drunk, and even then reluctantly, and not well. When they made love, She would never take the initiative. One time, while in bed, he asked her what she wanted him to do, and she blushed and told him “you know everything is ok with me.” She was, quite possibly, the perfect woman.
After a few minutes, Tae Young raises her head. “Are you ok?” she asks, motioning with her nose to his semi-flaccidity. “Yes, it’s just – my, my insides are burning,” he tells her, forcing a laugh. He is nervous. “What, you haven’t done this before?” she smiles, reaching for the bowl of condoms alongside the bed. “No, it’s just, I –“ he pauses. She pauses. He looks down. “Tell me, ajosshi,” she says, her hands coming to rest on his naked thighs, and in the candy pink light, it’s hard to feel like she’s being sincere, but it sure seems that way.

This is wrong. He wants to be home in bed with Her, smelling Her hair, his hand on Her hip. He wants to hear her soft snoring, to breathe her mild halitosis in the morning, and to see her face without foundation. He wants a Them, but ‘Them’ is not an idea he’s allowed to entertain anymore. Instead, he is in Sinyongsan, in a neon-lit room, with a Liberated Woman. It is Christmas Day. This is all there is. “Could you –“ he pauses, considering the strange nature of the request he’s about to make. “Yes?” she says, her long, fake lashes almost audible in their fluttering. “Could we – could you, just – hold me?” he asks, finally.

Lying there on the scratchy pink comforter, bathed in a cold, rosy glow, he tries not to think about all the other men who have shared this bed before him. He tries not to think about Her, and where she is right now, and where They could be right now if there was a Them. The girl lies behind him, and slowly strokes his hair, his thinning hair. With his glasses off, he can’t really see himself well in the mirror, which is probably better. She begins to hum. It takes him a few seconds to recognize the song. Silent Night. It was Her favorite Christmas song. He wants to tell the girl to stop, but he doesn’t. He wants to get up and run away, but he can’t. He wants it all to be right again, he wants it all to make sense again, he wants the house and the child and the safety and the love and the passage of time and the growing old and fat together and the inside jokes and the silly squabbles and the not having to be alone on Christmas in a cold city on a cold night with a girl whose company he had to buy. So many Christmas wishes, and none of them have any hope of coming true. He squeezes his eyes shut, and waits for the tears to come. 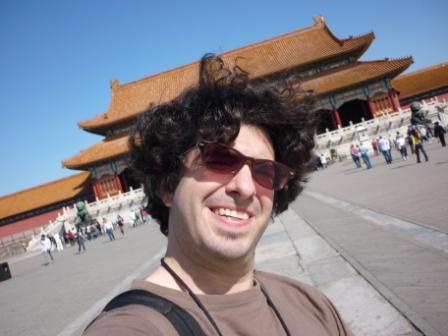 Bryan Fox came to Seoul from Brooklyn one year ago, chasing Love halfway across the globe. When he got here, it turned around and kicked him in the crotch. He has published travel writing in various places and fiction in the online journals Underground Voices and Mudluscious, as well as in the Seoul Writers Workshop 2009 anthology Every Second Sunday. He can be contacted at:scriptingends@gmail.com