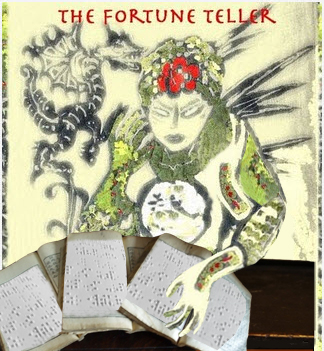 When a younger Korean friend offered to share her own family’s experience with divination, I didn’t know what to expect.  It began with the simple background of her grandparents seeking a reading about the compatibility of their children — should they marry?  The answer was no; the signs were not favorable.  Nevertheless, the couple went ahead with the wedding.  Following the marriage, one grandmother again paid her visit to the local Buddhist temple to have a monk read the future of the marriage. (Many monks have similar training to what diviner Baek and other diviners receive; they are also able to read the four pillars.) This time the reading advised the couple not to have a son in the year of the pig under the Chinese zodiac of 12 animals.  If they did, the father would die. What followed was the birth of a son in 1995, the year of the pig. Within months the father was diagnosed with cancer in his early 30s. He fought hard against the disease for six years and then passed away at the age of 38. His daughter says that her grandmother still visits the diviners every year and often has talismans to ward off evil spirits.

Upon entering diviner Huk Jin-joo’s place of residence and reading, my interpreter and I were met by a woman who directed us to a small room where a traditional Korean table rested in the middle of the floor, several books on its surface. We were told to sit, and soon after a petite middle-aged woman with both eyes shut entered unaccompanied and sat on the opposite side of the small wooden table. “What is it that you wish to know about?” Ms. Huk asked regarding the type of fortune we required. I told her that I desired the typical saju — the reading of my four pillars — and provided the necessary points of information. She ran her fingers over the Braille in her text and then produced what is called a santong which is a case for bamboo fortune slips that looks something like a small bronze egg. She shook the case for about 30 seconds producing a sound that was like rice in a jar and then withdrew the slip that had found its way to the slot.  We found later that Huk had lost her eyesight in middle school because of cataracts and had been sent to a Buddhist temple on Mt. Seobaek in the southeastern part of the peninsula.  “It was hard because I was alone without my parents but the monks were kind and taught me many things,” she said.  “I learned how to accept my condition.”  Huk later went to a school for the blind and started divining at the age of 20.  There is a certain comfort and tranquility that Huk exudes which she attributes to her life and, especially, her family.  “I was able to marry and we have a son and a daughter,” she explained.  “Both of them had a good education and are now married.”  She told us that she got her masseuse certification so she could earn additional income to help put her son and daughter through college.  She now has a regular clientele seeking readings, many of them from Japan, who either fly to see her or fly her to see them.  “Business has always been good because I’ve established a reputation and relationships with visitors,” she said.

Beyond the economics and logistics that brought diviner Lee Do-byeong to Mia-ri in the 1960s, there is another factor that makes the area spiritually consequential — just to the north over a knoll rests Mia-ri Public Cemetery where large numbers of Koreans were buried during the Japanese Colonization from 1910 to 1945.  The poet Lee Sang,who was imprisoned in Japan in 1936 and died of tuberculosis in a Tokyo hospital in 1937, was among those laid to rest at the site.  In addition, during the Korean War when North Korean troops occupied Seoul, bodies en masse were dumped there.  It is said that the site became “saturated” so other locations in the city were designated as cemeteries including an area near Mt. Mangu which sits on the northeastern edge of the city.   The line becomes blurry as to whether diviner Do placed any importance on this — I found scant information, and repeated attempts to contact professors at Seoul National University and Yonsei University were fruitless.  However, when I asked diviner Baek what made the area special — I hadn’t mentioned the cemetery — she said, “the gods reside here,”  adding that many souls had come and gone from the cemetery.  With that I was only left to speculate that, perhaps, some souls had never gone because of the duel tragedies that the peninsula faced in the 20th century.

Diviner Baek read my fortune with the same seriousness that a doctor some years ago after I had a nearly fatal car crash told me that I would need emergency surgery.  Nothing was watered down.  Saju provides general information about one’s life and specific details about what the months ahead may hold.  With my fortune slip between her fingers, Baek said I have no luck from my parents or siblings — a simple “you’re on your own.”  I should not inherit anything or it will all be lost.  After confirming that I am not married, Baek said that was a good thing because it would have been ruinous.  “You will find someone next year,” she prophesied.  “She should not be overly intelligent because conflict could arise.”  Then she turned more serious and asserted that an evil spirit had come to me when I was 29; this I was at first perplexed by.  “You need a talisman,” she advised.  “You must wear it for seven days then burn it.”  She was not happy when we asked to move on but she did.  A promotion from January to March.  Meeting good people from April to June.  Don’t travel to foreign 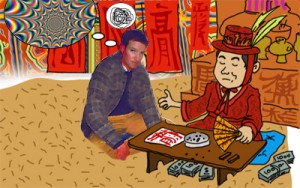 lands in the summer.  I will live to be 89.  From 55 to 60 I will do much philanthropy.  “Have you considered the talisman?” she asked.  Could we continue?  “You should open a hotel or an academic institution,” she added.  “The talisman?”  Her insistence made me return to 29 — and the Korean way of determining age.  A baby’s age is one year old at birth and then he or she turns two with the new year.  After thinking, it approximately worked out that I was 29 “Korean age” when I started having intestinal problems related to that surgery my doctor notified me about some years before; serious problems that incapacitated me for several days at a time.  Evil spirit is almost an understatement.  But I could be stretching for a connection. I could.

Talismans have a somewhat mixed reputation in Korea. The skeptics see them much like divination itself and also as intricate gimmicks that serve as deal closers for diviners given their expense — the talismans are available at different prices according to the situation much like the treatment necessary for as doctor’s diagnosis.  They can run from a few hundred dollars into the thousands and, reportedly, beyond five figures (the most expensive are often purchased to drive out serious illnesses).  Believers see them as cathartic and protective, purging evil entities and warding off those foreseen to come.  Diviners supposedly take great pains to consecrate the talismans spending hours, days and months praying to the gods.  Diviner Baek explained that the talisman I needed would cost several hundred dollars while adding that she had spared no effort in preparing it for its purpose.  “I prayed to Buddha at the temple for 100 days with that talisman,” she said.  Baek said the talisman should be kept close to my body for the entire time and then burned at the end of the full seven days.  It is important to understand that any good fortune that is foretold hinges on the talisman as the facilitator.

The reading that diviner Huk gave was more relaxed than Baek’s but there was no lack of gravity.  Once she read the fortune slip, she moved her fingers across the Braille in her text and began with something that almost made me chuckle as a resident of Korea.  “You must beware of people named Kim, Park and Choi from January to April,” she advised.  What did she mean?  “People will try to get in the way because of envy or jealously, to prevent success.”  I wondered what would happen if I left Korea but didn’t ask.  “Beware of possible law problems from January to July,” she continued.  “The end of the year will be good.”  But then she stopped for a few seconds and said, “It could be a very good year or a bad year.”  I somehow knew what was coming next.  “You need a talisman,” she said firmly.  “Is there an evil spirit?” I asked.  “No, you have survived bad things in the past well,” she told me.  “You need this talisman to assure the year is good.”  Huk’s talisman was slightly cheaper than Baek’s but she told me I would have to follow the same ritual.  “Do you wish to protect yourself?” she inquired.  It would be taken into consideration, I told her.  Then I asked about my parents and their health.  “Both of them will live long; health is good in your family,” she said.  “But your mom has a fortune of the legs and she will have some problem here,” she continued.  “Your father should beware of the liver and stomach.”  The first thing stopped me cold.  My mom already has some problems with her legs related to neuropathy.  My father though, gratefully, has not had any serious liver or stomach problems.  Is it random?  When I asked if she’d ever read her own fortune, she said her four pillars forecast her loss of sight.  It was the same thing Baek had said and I no longer saw it as a gimmick.  Perhaps such little things are what keep the faithful coming back.

Nothing ever happened to my middle school teacher and I don’t think any of my friends thought it would.  Nobody believed in what we were doing except maybe the kid who came up with the idea.  But what if something had happened?  A car accident or some freak health problem?  Would we have believed?  In a sense we were casting a spell, whereas diviners are delivering a message from somewhere based on one’s birth, on those four pillars that define our entrance into this world.  How important is that moment?  What elements had to meet  for each of us to be born?  What if a great-great grandfather and mother had never met, fallen in love and conceived a child?  How easy is it to believe that our lives are somehow shaped and affected by all those pillars before us that led to our one moment in time?  I had thought that most people visit diviners because they want answers to questions but what I found is that questions are all I’m left with as I consider the talisman and everything that is the blind diviners of Mia-ri. 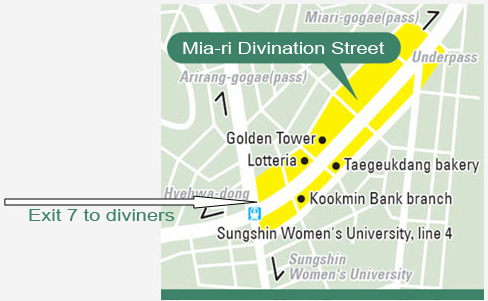 Seoul To Shanghai: A Work Under Construction