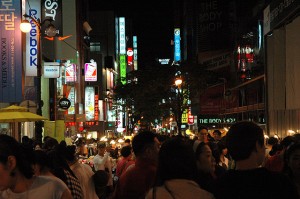 The city of Seoul. All cities are alive, but whilst others are fading into the annals of history this one has a beating pulse, a young pulse. The spotlight must move, it has chosen this peninsular.

People work and walk and sing and drink, but underneath it all, like any good city, is another face. People on street corners staring into what you are meant to perceive as nothingness; the telephone box users are not making calls, the old man in the café fondling the corner of his morning paper is not biding his time. They are watching the world go by. Go out and look. They are there. With orders.

Where there was once a sub-culture of fear, the air is changing. The glossy magazine readers and watchers and casual news-feed listeners are largely oblivious to the vast bulk of what surrounds them; sadly whether it is through choice or circumstance is definitively unanswerable.

The local kids are starting to openly bare tattoos, a feat unthinkable a generation ago. For every one hundred mindless model-come-pop star wannabes, there are a group of ten in a basement starting to mention politics in a clichéd and wholly ineffective manner.

Moreover, they are starting to voice their thoughts in a way that has not happened here before.

The South Korean people and varying governments post 1948 (and at points prior throughout history) are rightfully notorious for attempting to take a problem into their own hands, should the necessity have arisen. By the standards of other developed countries and by comparison to other, varying attempted governmental-overhauls, South Korea is well up there in the latter part of the 20th Century as being wholly pro-active.

Since Syngman Rhee in April 1960, there have been ten presiding, public, essential political over-seers, governing under various titles. Syngman Rhee was forced to resign. Chang Myon lasted less than a year and was removed in a coup. Yun Bo Seon stepped down quietly. Choi Kyu-hah lasted mere months. In later years, people lasted longer, but still met with in-house restructuring or public nervousness. The indirectly elected Chun Doo Hwan rode out seven years and stepped down for former classmate Rho Tae Woo. Both were then lifted on charges of financial corruption in an investigation instigated by Rho’s follow-up, Kim Young Sam. Kim Young Sam was then later, somewhat ironically, lifted on charges of financial corruption. Kim Dae Jung was popular amongst the people. He also met with outright allegations of corruption. Roo Moo Hyun battled allegations and later “threw himself” off a cliff. Since self-governing Independence, two Presidents have not (yet) faced out-right charges of corruption or a socio-political-ousting.

Firstly, figure of history books and iron-fisted ruler Park Chung Hee, who was shot October 1979 at a dinner party by the then head of the Korean Central Intelligence Agency, his former classmate, colleague and confidant Kim Jae Kyu. Incidentally, Park’s daughter may well run in the next election.

Secondly is current president Lee Myung-bak, a man taking a lot of flack from both those on the street and in-Blue-House, across the board here in Seoul.

To an extent, this sort of third-party involvement puts other countries to shame by comparison. Whilst accusations of corruption at all levels are rife, the kind of third-party involvement proven to be successful in those who govern that which is around you is a wonderful thing. It depicts a fully functioning concept of minimal public tolerance and relays the message that if you do not do your job properly, your days are inevitably, invariably numbered.

However, whilst it takes hefty civilian balls to intervene in the direction of one’s land-mass, en masse, these feelings have seemingly been relegated to the days of the past. What we have now, coming up around us, borders on the different. It is the apathetic rebellion, the kind that one sees in any city where free thought is encouraged in principle but not on paper.

As the South Korean peninsular has relaxed and the concept of Unification is something that the new-generation, the generation coming-up, closing-school years and entering university, have little or no interest in; the city of Seoul is drastically changing.

The lack of interest is not as complicated as political belief. They, the generation coming-up, just do not care in the same way as their elder siblings, parents and grandparents do and did.

In amongst the surging tide of ever increasing K-Pop and cosmetic surgery, the underbelly of Seoul, holds, like any true, cruel city, its own fine line and grey area between crime and security. Apparent to those not locked down and out in deeply out of sync Confucian values or generic religious lunacy, is the alarmingly simple Way of the city, providing a neon-haven for the hookers, call girls, escorts, drug-runners and carriers of private messages.  Still, the number of those oblivious to that which surrounds them in Seoul on a day to day basis remains a substantially high number.

As Seoul becomes Hong Kong of the 1990s, those that loiter, strolling to box-off junctions when crossing the road, standing outside late-night bars at ten-to-two casually smoking, being acutely sure to pocket their cigarette butts and on occasion rubbing their heads and darting into the subway will start to bare more of a public face. As the currently label-conscious youth become disengaged, lost in the banality of mundane television and twenty second diluted news-bites, something will inevitably change; a fluffier government in South Korea, could it be?

Like the United States and Europe, going Saturday-morning-viewing on Homeland Security makes for great Public Relations.

In 2009 the South Korean National Intelligence Agency hosted a game on their website with the aim of teaching children how to (essentially) spot a North Korean covert operative. By comparison, in the early 1980s school children were simply encouraged to take to the mountains with a stick to look for the same thing and call-in any promising results. The reward for a successful hunt was a waver on mandatory military service and a large cash sum.

Those who adhere to the teenage street walkers and meth-peddlers aside, balancing the elements of any true city remains an impossible feat without the use of the “Grey Area”. When so much of a metropolis is untouchable by any conventional means of law enforcement one can only assume that the flip-side of the fraction, those who move amongst the scum, move amongst the ‘innocent’ also.

It is easy to conduct quiet business around those who do not care what the world will bring them that morning; the people who live one day at a time, opposed to those planning the conventional, resume-friendly, family orientated South Korean lifestyle.

What relates the two, the youth and the unseen, is the new generation. As North Korea is headed towards a somewhat historical health-orientated regime-change (as dictated by common sense and an infinite amount of previous Empiric-based case studies), the split between decadence and counter-culture, the choice in a functioning system where money falsely directs class and social standing, plus those who choose not to conform, will start to look elsewhere.

After the fall of the Soviet Union, twenty-odd countries suddenly lacked unanimous direction. Since the fall of the common enemy and the Cold War, government world wide focused on padding close-to-home issues. This required an interaction with the people. This interaction came in the form of comfortable existence and easy access privileges.

Keeping the people dumb, double-bluffing x-billion individuals into thinking that they know what is going on and pulling a fast one elsewhere has become the staple of standard operating procedures.

Seoul is coming hard, messy and fast into this category.

What the youth will see is something their elders, those who are slowly falling from the loop and the moment, have never had the chance to see because on the whole, they were never aware of the choice of ignorance. Instead their elders had the thing in view that one can see when one consciously has nothing to look at — everything.

Cases of clinical depression amongst the young are on the rise. Those who feel alienated will inevitably turn away. In amongst the useless drifting mud will be the bright ones and they will change something in a way that has not yet happened here.

It may, or may not, be pretty. Though fuck knows what it is that they will change.

The Hamilton Hotel: Scrub my Back in the Sauna?