HomeEXPAT LIFEThree Minutes to Find a Soul Mate: A Tale of Speed Dating in Seoul

Three Minutes to Find a Soul Mate: A Tale of Speed Dating in Seoul

The dating scene amongst foreigners in Seoul, if we’re honest with ourselves, is lackluster at best. Everyone has the same job, goes to the same places and nearly everyone has come to this country for one of three reasons: job’s easy, money’s alright or there’s nothing for them back home. There’s also the added fact that as foreigners our stay here is temporary, making it difficult for many to pursue the possibility of a relationship while here. With this being the general state of things, the options, and optimism, of those seeking meaningful relationships in Seoul begins to degrade.

In order to combat this sordid state of affairs, two women, Rachel and Gillian, who asked not to have their last names printed, founded The Fresh Catch, which is a speed dating organization here in Seoul. These two ladies are attempting to shake foreigners out of their soju induced stupor and give them a crack at something more than a drunken grope fest in a DVD bang at 5:00 A.M. with someone you’d never touch without a lot of booze and low lighting.

The most recent event held by The Fresh Catch, the first English language speed dating organization in Seoul, was February 27th at Vin Vino’s in Itaewon. The daters, it goes without saying, were teachers, aside from a group of four soldiers who left before the event even got underway. The people came from the places English teachers come from: The U.S., Scotland, Ireland and Canada. Many lived both outside of Seoul and within the city limits.

So why do people go to speed dating events? Are they looking for relationships? Are they looking for love? Or are these simply new waters to troll, hoping to reel someone back home, back to bed? This is what Heather had to say when asked what it was she hoped to find:  “Informal fun. Looking for new experiences and trying to meet new people.” This turned out to be the case with most of the speed daters. It seemed everyone just wanted to meet people in a place that wasn’t a bar. They wanted to meet people on common ground without getting eyeballed from across the dance floor, or without having to put on a show while shouting over club music.

This is difficult in Seoul. Sure it’s not Paris. It’s not London.  But the fact that it becomes difficult to meet people here sans the bar scene has more to do with the quality of foreigners who come to this country than anything else. But perhaps that’s unfair. It’s too easy to regard everyone as somehow lost or lazy or damaged in some way that makes them unfit for their own country, and therefore unfit to date, but that’s the attitude we have with each other isn’t it? On the subway, in the street, when foreigners see each other there’s usually this thought:  “What’s this person running from?” In a place where the few people that have similar cultures and share a language regard each other in such a manner, how can we take each other seriously? How can we even acknowledge the plausibility of finding someone genuine, someone we would date back home?

This was borne out in the scene at Vin Vino’s. The people there were nice. They had interesting hobbies. Some were artists, some were tattooed, many read books. They were the kind of people you would meet back home, wherever that happens to be. Everyone seemed to complain about the nature of the bar scene in Seoul, which for foreigners is synonymous with the dating scene. The Fresh Catch provided a chance to get away from that. 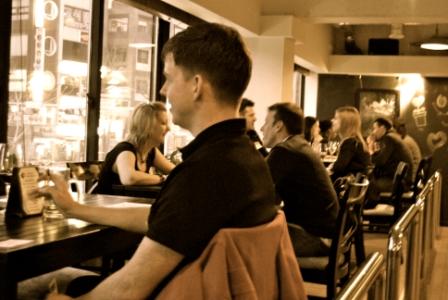 When questioned about the ultimate goals of The Fresh Catch, Gillian said, “we want people to meet others from different walks of life in stylish and comfortable settings.” The key here seems to be comfortable. The Fresh Catch is about bringing people together for fun in places other than clubs. And the ladies are planning for the future. They have an upcoming event on March 13th at Castle Praha in Hongdae. You can learn more about it at freshcatchdateabase.com. The organization is determined to soldier on, having already experienced a modest achievement. The organization has produced one engagement. There’s a couple getting married this summer who met at the first dating event held by The Fresh Catch.

So maybe everyone does have the same job, and it is easy, and yes, the money is decent too, but isn’t that what we’re supposed to look for? Work that gives us time to lead our lives in some meaningful way and that also pays the bills? Is being an ESL teacher in Korea a sign of incompetence? A no go in the dating world? For some this is the case. For others it isn’t. Ultimately, it comes down to effort. What kind of a foreigner do you want to be? Put the bottle down and read a book once in a while. Leave Seoul for some reason other than the Mud Festival. Study Korean, after all, you’re teaching them your language. Be someone datable and look for others doing the same. And while you’re at it, check out The Fresh Catch. It is fun. You get three minutes to talk to each person before moving to the next. Three minutes to decide and circle DATE, FRIEND, or NEVER on that little piece of paper you’re given. At the end of the event, the papers are collected with each person’s e-mail and the responses are sent out accordingly, and you won’t know until the next day who thought what about you, just as you won’t know what could have been if you never go.

From Seoul to Vegas to Mexico to Cuba and back again: A travelogue pt. II