From February 22-27: A week and its perspective at the Seoul Museum of Art.

It was meant to be just a one-night recollection of the Warhol that two out of five of the world’s citizens know and are now blasé about.  But Monday night is the museum’s closed night. In the review from the local English dailies and Korean blog land they all mentioned Warhol’s, “In the future everyone will be world famous for fifteen minutes,” but left out that the Seoul Museum of Art (SeMA) and his show are closed on Mondays. I thank the stone heads, for the inspiration to do this week long pop-culture penance came while walking around the Gyeonghuigung Palace/ City Hall area where a certain enlightenment comes when knowing that this is the most urban area of Seoul and a deft realization quickly follows: better to keep coming back to check out soup cans and celebrities because anything is better than going down the street to see Nanta!

Besides, the cacophony of the primordial world is repeated in Seoul and also best to be caught live away from an expensive tourist trap in a kitchen and on the cheap: in the subway station. The green and red wire lights run under the walking paths around SeMA and then guide to the cloisters of Gyeonghuigung where everything is set in motion at Line 1 City Hall station exit 12. In the rush hour scurry back to where I know what’s open or closed on a Monday, I only count seven careless invasions of my body space public. I take it in an I’m-Ok-you’re-Ok stride because the very low strung commuter indifference of the locals is easily matched by me sitting in the stainless steel rows at the end of the cars. These are of course reserved spaces for: draft dodgers, Bronx residents, dyslexics, albinos, gunshot vics, Catholics, mannequins, Velvet Underground supporters, nose pickers, hypochondriacs and for of course those cast with the true stigma of decadence for his and our times: the too swish and the childless. And of course we get it by now: Andy Warhol unequivocally fit into every one of these categories himself! And one more thing, he was born August 06, 1928 in Pittsburgh and died on this same day, February 22, 1987 in NYC. And on that same day, the Vatican issued Donum Vitae, Instruction on Respect for Human Life in Its Origin. A church doctrine opposing in vitro fertilization and for the current matter: cloning. Warhol: a real piece of work and one of a kind.

oup can and into Warhol’s looking glass everyone enters.

The phrase the loudest one entering the room becomes the weakest one in the room doesn’t fly over here. Fifty feet above the ground floor and approaching Warhol’s, Yellow Banana, Korean women unironically and unapologetically are exchanging cameras and scrambling around the banana. It’s become common behavior not giving any still moments a chance; better instead to make any possible connection to the trendy then let fly into a session of machine gun photography. Annoying behavior at a museum really and anything other than cool bananas.

Turning right into the first viewing room, “Marilyn” is waiting but offers no relief. The conspicuous museum guards are slopping their shoes on the floor and with uncontrollably beastly laughter (practiced at and then canned for occasions like this) are not even unwilling contributors to the show but willing disturbers. Compare to this link: Hoping to Graduate From Guards to Gauguins.

And there is a good chance that Warhol’s style of superimposing garish strokes of color over face portraits and peeling labels off soup cans disturbs the male-totem guards much more than it does the about 80% female audience I watched watching Warhol. In effect as Warhol was busy with the near-autistic color manipulation of “Marilyn” 1967 and “Flowers” 1970 what he really wanted and was madly successful at doing was exploding commonly held images of beauty or function and turning them into a same nothingness. 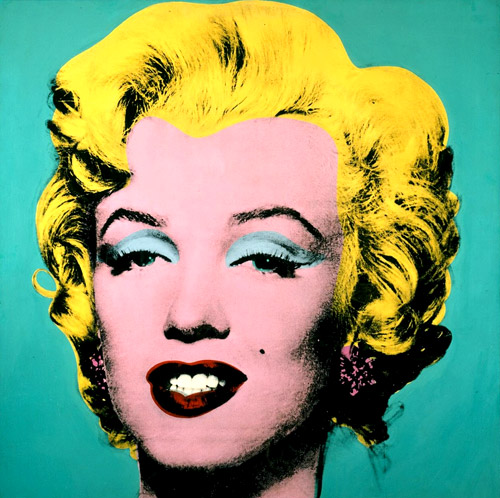 It was the American 1950’s he grew up in. The 50’s with all its handsome synchronization of God and Family and Country. It was something Warhol had paid too much attention to and was going to find a way to break it all down. As you line up your vision to the far wall and the soup cans you see the museum security guards have in their own way the same idea to break it up. Break up the soft concentration of viewers paying too much attention to the imperfect soup cans and coke bottles on the walls and not at all enough attention to how rice-skinny they are and will stay. I am not the first one to remark that Korean males need their mommies. And as they keep making noise at the Warhol show it all becomes noticeable how the 1950s were taken away back there and what 2010 East Asia is still maintaining: “I am here mommy pay attention to me, I don’t look silly. I am not strange like the pictures on the wall. Who would make pop stars with strange colors? I am here mommy.”

Part 2 in next issue of 3wm. You still have enough time to get to Warhol— The show runs until April 4. 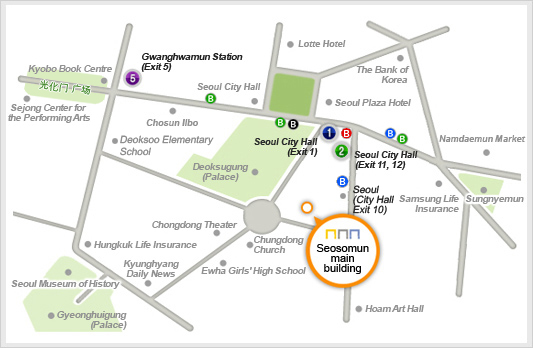 Swimming in Seoul: purgation through the pool