Yes, it has been another big week of news here on the peninsula and so, in this first of an ongoing series of more or less depthless articles, I, dear readers, am here to disseminate and illuminate on all the crap that’s apparently fit to print.

For those uninitiated to the masterpieces of journalistic genius that comprise the South Korean print media, a stroll through the daily newspaper may at first be somewhat daunting, so feel free to grab an English edition and walk through it with me. Again, for those new to the complexities of inter-Korean relations it is important to first understand that there is, somewhere, a table. It is the job of the North Koreans not to come to that table and it is the job of South Korea, other regional powers and the Americans to try to get the North Koreans to come to that table. However, with the recent sinking of a South Korean naval ship in territorially disputed waters I will give this one a pass. This is news with real import — let’s see how this plays out and allow the local English dailies do their job and give us the news of what really happened. (See here for extensive coverage from One Free Korea-  Iwazaru)

The next section is the all important ‘Business Section’, which will tell you Korea is always open and good for business up to the point where it makes up about ninety percent of the newspaper, and finally the back page, which announces the results of recent sporting fixtures which took place on the other side of the planet.

So without further invite… drum roll please: our feature article of the week comes from the front page of the Korea Herald, which on Tuesday, March 16 announced… wait for it…

One in five sex offenders university grads: survey
Yes, more frightening than the old lady who promised to take the carnage on Korean roads to even greater heights by getting her driver’s licence after over nine hundred attempts, and more thought provoking than that weird guy who recently married his favourite pillow, we have now learned that twenty percent of convicted sex offenders in Korea are college or university graduates. Now, I don’t want to get into the argument about whether having a college diploma automatically lifts one to the status of the “highly educated”, as the report suggests. Rather, I was more taken by the wording of the headline itself. Surely as front page news items go, a far more thought provoking headline might have read, “Four in five sex offenders not university grads: survey”. That would really get people thinking, and possibly convince this nation to finally revise its rather lacklustre opinion of formal education. After all, there are only about one hundred universities in Seoul and really there should be many, many more, where an ever increasing number of students could benefit from the ever popular English Conversation courses and of course the mandatory bi-weekly ‘How to not go around committing sex crimes’ lectures. Anyway, you can read all about it, here…

Community Service Announcement
Yes, it’s yellow dust season again and just for fun I’d like to remind you all just how darn dangerous it is to breathe. Now, before panic sets in it would be remiss of me not to point out that to discontinue breathing for any extended period would be considerably more fatal than the alternative, so just keep doing what you’ve been doing. 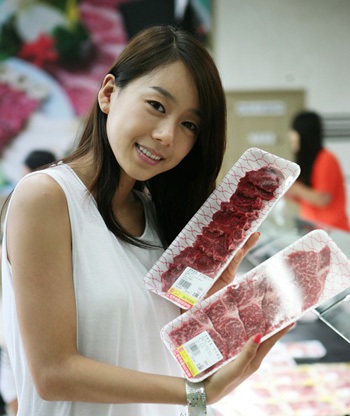 For those who believe that ignorance is bliss (I sure do, and so am writing this with my eyes closed) may I direct your attention to an interesting article about Korean food (it is delicious and every bite is jam packed with well-being and magical properties). The article should be easy to find. It is written and published daily.

Ah yes, that’s right. The dust! For the uninitiated, this stuff ain’t your run of the mill pollution (like that which makes me wonder why Seoul school children learn of a wonderful, almost mythical colour called sky-blue). No, this stuff is special, high octane, extra spicy pollution with heapin’ helpings of chrome, cadmium and lead. The powdery dust is a seasonal treat that rides the prevailing winds from the Gobi Desert, picking up traces of heavy metals as it blows east over the world’s factory before making its way to Korea and Japan. The U.S. military monitors the dust levels, which are measured in micrograms per cubic metre of so-called air. You can check it out here.
Curiously enough, for the past year or so, their website quoted “technical difficulties” as its reason for omitting the colour-coded chart that explains the health risks associated with inhaling various quantities of air-born toxic metal shards. That information recently returned to the site, though it is less detailed now and, apparently, we are less vulnerable to the stuff than we used to be. There are now no recognised health risks associated with dust levels lower than 400 micrograms (that figure used to be 100). All you really need to know is, don’t go jogging when the dust levels rise and when they spike to over 1000 micrograms, well… Slowly!! Walk for your lives!!!

International News in Brief
Large numbers of New Zealanders not physically attracted to sheep, claims expert.
Dutch homosexuals did not cause the Srebrenica massacre, no matter what one crackpot says.

Stay tuned for more news and random weirdness from the peninsula.

Scoop lives in Seoul and works as a Professor of English at one of South Korea’s top one thousand universities.