HomeReviewThe Lessons of Vietnam: A review

The Lessons of Vietnam: A review

A Review of Stanley Karnow’s Vietnam: A History
by J. Lee

Many keen observers today note as the prospect of an expanded war in Afghanistan looms that the United States has yet to “kick the Vietnam Syndrome.” If anything, the recent developments to shift the warfront from Iraq to al-Qaida’s alleged home turf in Afghanistan have led many media commentators and academics to draw what they deem to be “striking” parallels between the present War on Terror and the first war the United States had ever lost on foreign soil. For this reason, an attempt to discern the parallels between the present quagmire and those of Vietnam should be made through a careful reading of Stanley Karnow’s book, Vietnam: A History, to derive appropriate lessons.

When the author first went to Vietnam as a correspondent for Time magazine in 1959, he did not go to Vietnam with preconceived notions of the validity of moral crusade against the “evil” Communists. Nor did he have an inkling back then that “three million Americans would serve in Vietnam… [and that] the holocaust [Italics this reviewer’s]… would devastate Vietnam during the subsequent sixteen years of war.”

To trace the origins of the Vietnam War, Karnow takes his readers through a guided tour of Vietnam’s rich, if not troubled past. In his riveting account of the ancient Vietnamese history in the third chapter entitled, “The Heritage of Vietnamese Nationalism,” one discerns a disturbing pattern which bedeviled the nation throughout its long history; oscillations between a series of foreign intrusions often wrought, if not punctuated, by internecine conflicts between rivaling clans and factions, followed by spirited resistance against foreign invaders. While many Eurocentric historians contend that nationalism did not exist anywhere prior to the 18th Century, Karnow scoffs at this notion, and argues instead that nationalism has always been a potent cohesive force that had united the Vietnamese against foreign powers, for it is through their victories against foreign empires, namely the Chinese and the Mongols, that one discerns precedence for nationalist guerrilla struggles. Where antediluvian weapons and a lack of conventional military did not favor the indigenous people, they brought to bear Vietnam’s treacherous terrains and climates, their ingenuity, and their unwavering determination to evict foreign “barbarians” to even the odds.

As any serious historian must, however, Karnow fully understands that a mere examination of the origins of the Vietnam War solely within the contexts of colonial struggle and Vietnam’s internal history is facile and thus, far-fetched. According to his book, the seeds of Vietnamese discord and eventual war with the Americans may have already been sown during World War II, and accordingly, deserve scrutiny within the context of the nascent Cold War. Karnow avers that, during World War II, both Roosevelt and Truman saw Ho Chi Minh and the Viet 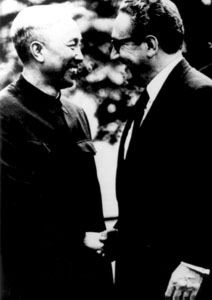 minh as mere janissaries of the Chinese Communists at best who were themselves viewed as “puppets” of Joseph Stalin. As such, while Truman, and later Eisenhower, viewed the draconian French colonial rule with disdain, they both believed that if they did not aid the French in their attempts to hold on to their colonial possession that the United States’ foothold in Asia would become untenable. However, the three year-long war in Korea which ended in stalemate was to inform the cautious, indirect approach under Eisenhower, for he was mindful of possible Chinese interventions in the event of further escalation of the conflict in Vietnam.

If Eisenhower’s chary policies towards Vietnam were marked by restraint and indirect involvement which consistently undergirded the overarching American global containment strategy, then, what characterized the policies of their successors was the absence of a consistent approach to prosecute the war. As with many mainstream Vietnam War historians, Karnow subscribes to the view that what might have marred the American strategy, or the absence of it, were the striking impatience and inconsistency with which Eisenhower’s successors conducted the war in Vietnam, coupled with the absence of compelling justification for waging the war on behalf of their South Vietnamese protégés. To get his points across, Karnow often cites from numerous interviews he had conducted both during and after the war. The pictures that emerge from the litanies of interviews cited are those of suffering, confusion and terror that afflicted both the Vietnamese people and the Americans alike, which were caused by America’s fumbling if not myopic war effort in Vietnam. Thus, in hindsight, it was to no one’s surprise that the United States had no choice but to concede defeat to the Vietnamese Communists. It is also interesting to note that despite the United States having “lost” Indochina to the Communists in 1975, contrary to the prophecies by many foreign policy mavens of the 1950s, the Domino Effect did not take place in Asia. As Karnow consistently argues throughout the book, Vietnam was, and should have been, only of marginal importance in the context of the Cold War realpolitik.

When the first edition of Vietnam: A History was published in 1983, the former CIA director, William Colby, who oversaw the notorious Phoenix Program as its Saigon station chief, hailed the book as “the benchmark against which subsequent attempts to explain the American involvement will be judged.” However, this otherwise perceptive historical account suffers from flaws which stem from the fact that Karnow deliberately subjects facts to his preferred interpretations, despite his purported claims that he was merely “reflecting” the events which transpired throughout the war. Vietnam: A History, forfeits its claims to disinterested objectivity, for its author primarily presents the views of the Americans and the Vietnamese Communists, while deliberately denigrating the South Vietnamese as corrupt, and inept at best, whose views, aspirations, and efforts to preserve their fragile freedom and stability are not worth considering.

Nevertheless, to dismiss his book as anti-South Vietnamese or a litany of bitter diatribes cast against the American executive branch responsible for the prosecution of the war in Vietnam is to miss the point. Rather, this weighty volume must be understood as a heart-felt caution against headlong involvement in a protracted war of occupation of marginal interest to a super power. In light of the so-called “Long War” waged against America’s perceived enemies in the “Greater” Middle East, the parallels are all too telling. Just as Truman, and later, Eisenhower, defined American interests in Indochina within the context of global containment strategy with little or no consideration given to the historical aspirations of the Indochinese people, so too, must Bush and Obama be accused of interpreting America’s interests in Iraq and Afghanistan within the overarching rubric of war waged against terrorists with no due consideration given to the history and national psyche that shaped both countries. Also just as Johnson’s use of the Tonkin Incident, 1965, as a pretext for direct American involvement raised the question, “Who had the power to involve the United States in a foreign conflict,” so too, is this question being asked once more as President 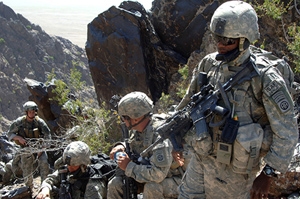 Barack Obama seeks to escalate the war in Afghanistan to extirpate the resilient Taliban and al-Qaida fighters in the Afghan-Pakistani border. Further, that the American troops today, who are schooled in mechanized conventional warfare, have proven to be maladroit in nation-building and counterinsurgency, while heavily dependent on firepower, bears striking resemblance to the fact that the American ground forces of the Vietnam era, formidable though they were, could not effectively engage the tenacious Communist troops without fire support, and that their clumsiness often alienated the very people they sought to protect. Last but not least, where Bush’s feckless and prolonged war efforts eventually resulted in the greatest financial meltdown since the Great Depression, we need only to turn to Karnow’s ac-count to find historical precedence for this, for he asserts that by 1967, “[t]he inflation spiral that was eventually to cripple the United States and the rest of the world had begun its dizzy ascent.”
All things considered, the lessons to be derived from Karnow’s comprehensive book, Vietnam: A History, despite its inherent flaws and biases, are these: that a nation, before it en-tangles itself in a war of little value to its national interests, must first examine itself and weigh its options and consequences thoroughly; and to stake neither its national credibility nor honor on an ill-defined cause. It is for this reason that this book must be made a required reading for those in the business of conducting wars. The consequences of ignoring the aforementioned lessons could be too much for them to bear, and may even portend the end of existence of their country.