A friend and longtime Seoul resident, embroiled in a pension-avoidance fiasco with his employer, recently lamented to me, “Not many people leave Seoul happy.” There are plenty of reasons why this is the case. From unscrupulous employers who think nothing of withholding pay and benefits, to desultory looks from locals in public, which range from mild distaste to outright disgust, to simply living in a place where yes, there are four seasons, but the two good ones are short and the two bad ones are interminably long (it snowed on St. Patrick’s Day this year), Seoul has a lot to dissatisfy even those of us who decide to stick around for a while. But take heart, for there is an easy and perfectly-acceptable form of stress relief which is a fantastic way to level the playing field—start pushing people around!

One of the beautiful loopholes of Korean society is that, if someone isn’t a member of your family, effectively, they don’t exist. This is what allows people of all ages to step in front of you while you are in line, stop at the top of a busy flight of subway stairs to send an SMS, or ride their moped against the flow of traffic on a sidewalk in the middle of the day. None of these people really feel as if they are wronging you, because you aren’t really there!

So why not use this to your advantage? In the immortal words of Cole Trickle in the Church of Scientology-inspired 1990 documentary Days of Thunder, “rubbing is racing.” We live in the most densely-populated large metropolitan area in the world outside of the Indian subcontinent (as verified by Wikipedia, therefore inscrutable fact). Mountains are crowded here, for god’s sake. So herewith, a brief guide of who to hit and where to hit them, guaranteed to enlighten and enliven your stay in this frighteningly overstuffed town.

I often feel that the most profound and important revelations I have come to me when I am at the bottom of a flight of stairs in public or at the top of a moving escalator. These are ideal locations to pause in reflection on Life’s Greater Mysteries. Sure, it may inconvenience the dozens of people whose movement I render impossible, but this is of secondary importance, really. And by all accounts, I must not be alone in feeling this way, for many are the times when I have had to dislodge a local who’s decided there’s no better place to set up momentary shop than right in the middle of the flow of traffic. Those who do this are welcome to my elbows, hips, and shopping bags – it’s almost my duty to those behind me.

In general, there is an implied flow towards public movement in civilized societies. Central to this is the notion of “getting off” before “getting on.” In many First World nations, I have seen children try to enter a train before the departing passengers alight. They are instructed by their parents not to do so. Perhaps that life lesson isn’t imparted upon the young here, or if it is, it’s forgotten by adulthood. (at least in the English version of the Seoul Metropolitan Rapid Transit Corporation’s website, the “let them off before you get on” rule does exist – though I wonder if the same warning exists on the Korean version of the site…) To be fair, you could argue that pushing into a subway car is ostensibly to get a seat as it opens up. But pushing into an elevator before people get out? Do you want a choice spot in the corner? These people deserve punishment. Verily, I mete it out upon them.

I could find no formal study on this (as I didn’t really look), but Koreans must surely rank among the most screen-obsessed people in the world. (certainly, what happens on screens is more important than caring for one’s actual, living offspring.) Korea is often touted as being the most “wired” country in the world, and it is certainly one of the most cell phone frenzied. And hey, what better way is there to forget that you can smell the funk of kimchi and last night’s soju oozing from the pores of all nine of the people simultaneously rubbing up against you in the morning sardine can that is the metro than by tuning in and dropping out? I’ll admit, sedentary screen time doesn’t bother me that much (though counting the ratio of TVs to books on a train is an interesting, albeit disheartening, way to pass a commute). However, walking while watching isn’t quite the same thing. Hey Choi, I’m sure that episode of CSI is riveting, but that doesn’t give you the right to stroll sideways and obstruct street traffic. And if you think it does, well then, I think it gives me the right to drop you.

Tele-Club boys and mobile phone touts in the street are in a category all their own. It would seem to be not only an unwelcome invasion of privacy, but also an act bordering on assault to actually grab onto and restrain a passing woman in an attempt to get her to buy what you’re selling. If these guys were in a club back home, they’d be bounced out faster than you can say mian hamnida. Here, though, it’s just a tolerated annoyance. As a foreigner you will never be harassed by these sorts. But they do get in the 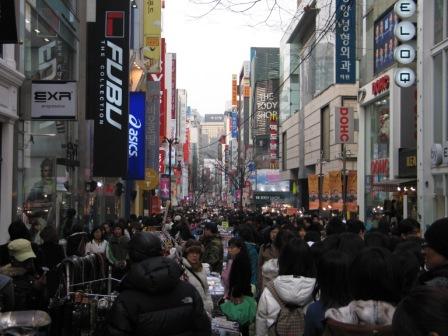 way on crowded sidewalks with their antics. And they provide the perfect opportunity for a firm shoulder check – they won’t be looking out for you, they are offering an undeniably unwelcome service, and, because they are working what is essentially a PR job, they can’t wipe the smile off their face, no matter how hard you hit them. So check away, and realize that the young woman whose path you clear will thank you for it.

And finally, this collection wouldn’t be complete without a special mention of the elderly. Yes, the elderly deserve your scorn. Never mind that if you are even over 40 in Seoul, every day is pretty much a complete mindfuck – I mean, Gangnam was a rice paddy thirty years ago. Neon was barred from anything but churches and pharmacies until the late eighties. But the times, they are a-changin’. And Korea’s unwavering respect for old people is in direct contradiction with its lack of respect for any edifice, product, or cultural trend that isn’t burandu supankingu new. So let me be the one to serve notice to you, Oldsters. You sneak up on the side of a subway queue as the door opens? Meet my hip. You try to push in at a supermarket line with two items in hand, holding them like they are a baby in need of medical attention? Talk to the hand, and maybe the shoulder above it. You stroll leisurely down a busy thoroughfare, four friends across, at 33RPM in a 78RPM city? Prepare to be bumped. It’s nothing personal. In Seoul, nothing ever is.

But surely, you ask, won’t you get into trouble treating a day on the town

like an ice hockey match? I have yet to see anyone get angry at anyone, Korean or non-, for “incidental” contact made anywhere around town. It’s all part of the rat race here in the Big Sagwa. And if you are still nervous about possible repercussions, simply take the titular advice from my third-favorite Ace of Base song, and “Don’t Turn Around.” Yes, it might be satisfying to see the aftermath of a solid bump, but that would be an explicit acknowledgment of the act – and that, my Seoul brothers and Seoul sisters, would be rude. Shame on you.

Originally appeared as “Bump and Grind” in seoulstyle.com.