Jennifer’s Calendar: A Night out on Homo Hill 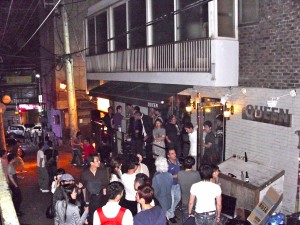 The moment I arrived in Seoul, my self-esteem took a nosedive. Thousands of porcelain-skinned, shiny-haired waifs in 4-inch heels everywhere I looked…I felt like some freakish blonde extra in a glossy fashion movie.

“You’re gonna be, like, a supermodel in Korea!” my friend Eric said before I left. His boyfriend chimed in, “Seriously Jen, they’re gonna think you’re famous or something.”

Well, it’s been nine months, and apart from some staring on the subway, I feel far from famous.

“Maybe you’re feeling down on yourself because you haven’t gotten laid in a fucking century,” said Eric during one of his “pep-talks” via Skype. “You know your vagina can actually grow over!”

“Well then what do you want from me? Move back here so your size six ass will be considered skinny again! And in the meantime, get yourself dolled up, go out to a gay bar, and get some much-needed attention from a bunch of half-naked men.” 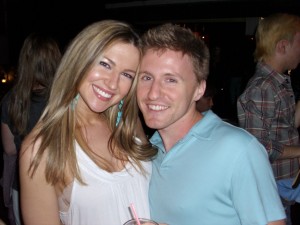 I couldn’t believe I’d been in Seoul for nine months and hadn’t explored the hill full of gay bars.

I pictured a pristine alleyway hidden behind the dirty, vomit-filled roads of Itaewon. Techno music would be pumping into the streets and glitter would be falling from the sky. Bartenders would serve fruity concoctions in martini glasses while wearing nothing more than cowboy hats and boxer briefs.

I tend to have a flair for the dramatics.

“Jen, I don’t want you to get too excited,” said Jason on our way to Itaewon. “Remember, we’re still in Seoul, not South Beach.”

But I couldn’t help myself. I sat in the subway, staring at the screen, anxiously waiting for our stop. When we exited, I practically skipped toward the hill.

It wasn’t exactly what I had envisioned. It turns out there are no clean streets in Itaewon, and there are no signs of glitter falling from the sky.

“It’s still early,” said Jason. “Let’s sit down somewhere and have a cocktail while we wait for people to come.”

We went to a place called Almaz. Plush red couches, silver sequined pillows, an outside garden, and a killer cocktail menu…my dreams of dancing all night, glow sticks in hand, started to seem more feasible. They even offered free condoms in the bathroom. 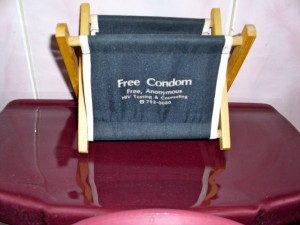 “I don’t know why you were downplaying this place, Jason,” I said. “I mean, there are condoms and what may be some sort of sex toy dispenser in the bathroom! This night is going to be ridiculous!”

So we headed back out to the hill and immediately heard, “Hey, you bitch! I didn’t know you were gonna be here tonight!”

Two very attractive men came running toward Jason with outstretched arms. “Oh my God, Jason, who is this beautiful woman you brought with you? We must take her dancing!” they demanded.

A huge smile took over my face and I followed them to a bar called Queen. 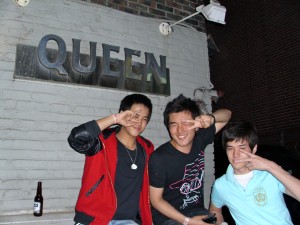 Twenty-something guys with popped collars and skinny jeans sat below the outdoor “Queen” sign, drinking bottles of Cass and whistling at passer-bys. Two men in suits had their lips locked, propped against the window. Inside, everyone was dancing.

“This is amazing!” I said to Jason’s friends.

For the next few hours, we spent our time mingling on the streets, drinking gin and tonics, and dancing to Korean pop music. We went to bars with clever names like “Why Not?” and “Always Homme.” I added five new numbers to my phone.

“Okay, you’ve officially been hit on more than I have tonight,” said Jason. “Let’s get some street food and go home.” 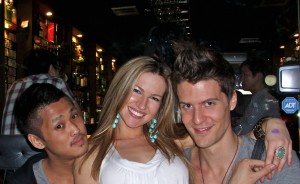 I wasn’t sure if it was the string of compliments I’d received or the positive energy I’d felt from the hill, but for the first time in a long time, I didn’t want a greasy burger or a plate full of tteokbokki.

“You know, my friend Eric was right,” I told Jason on the cab ride home. “I guess all I needed to feel better about myself was a night out with some gay men.”

“Or maybe you still just need to get laid,” he said, laughing. 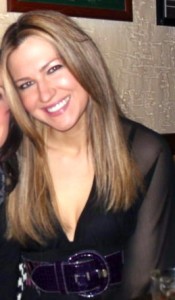 What Obama Means in Haebangchong