An Editorial from a foreigner living and teaching English in Bangkok.

Thailand is a land of smiles, friendly faces and laid-back people. This couldn’t be more true of Bangkok now. The smoke has cleared, the curfew is over, and the only reminder of the bloody protest that had the whole country on the brink of chaos (What was it? Only about month ago) is the occasionally seen burnt building or strings of  bullet holes in windows. It seems insane now to think that not so long ago Si Lom was a small war zone with tanks, rocket propelled grenades and armed forces battling for territory. Now I can walk through the park to Si Lom and see joggers, people picnicking and summer life as normal as if nothing ever happened. 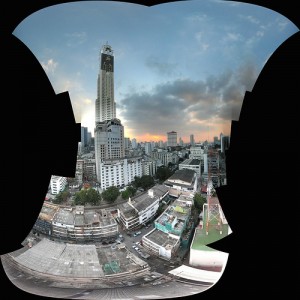 So what happened? Where did all these protesters disappear to? The answer is back to their farms and fields miles north of Bangkok and in many ways really a separate Thailand and another world. It seems like the government and stability won the day. Yet one can’t help but wonder, what was the fighting for? Thai people being killed by the Thai military by the order of the Thai government. I would like to think if this happened in England, that a month after the conflict, something would make sense, be changing or in process of being resolved; that all that blood wasn’t spilt so that things could go back to exactly the way they were with no change of story. And that is the rub—things are exactly how they were here before all the fighting and posturing happened. So what might really be happening under the famous Thai smile? Is smiling easy for everyone again? I’m in Bangkok so I can only relate what I see here, maybe outside of Bangkok things are different but for me living here: nothing has actually changed. 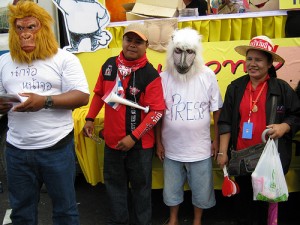 The Red Shirts have been labeled terrorists, their revolution failed and now they are whatever the victors want to call them. Thaksin is now considered by most local Thais as an international terrorist. Many Red Leaders are still in custody and the non-elected government is still in place. Maybe this is just how things are supposed to be in Thailand—a bloody power struggle. However, Thaksin is now really on thin ice. Most likely he sunk allot of money into the Red Shirt movement and he’s gotten nothing but trouble for it.  Now he is even less popular in Bangkok than ever before, it seems impossible he could ever return unless he did so in chains. So if this was only about him wanting to re-take power, well that has utterly failed.  So what’s left? What’s to be done? A lot of angry disheartened Red Shirt supporters are back to their lives as well the more affluent and modern Thais and yet the huge political divide between them still stands.  If anything is being done to bridge the economic gap between town and country Thais, I haven’t seen or heard anything about it. Not even in the wild rumours that fly around like Thailand should have more than Bangkok as its one capital.

On the streets of Si Lom weekend markets are being held, where all the tourist swag and urban bric-a-brac are bought and sold at prices that now seem to be about making up for lost business. In the background lively music drones out and the hope is that people feel secure again and even have their normality back. I don’t mean to sound cynical as I’m overjoyed to be able to walk the streets again without worry about the army and the bullets. During the trouble I couldn’t get much further than my local 7/11 without Red Shirt protesters armed with fireworks and catapults warning me about “The military snipers.”  I can only conclude people in Bangkok really failed to see the protestors as Thai citizens and fellow humans. During the conflict I remember a Subway worker complaining about how the army didn’t step in to clear away the protesters sooner. She seemed indifferent to the deaths and injuries this could have caused and never mentioned what the protestors were about. And certainly when all the TV stations which are controlled by the current government just show the violence and the streets and not the economic realities at the root of it, well it’s no surprise everyone ends up with such a superficial understanding. 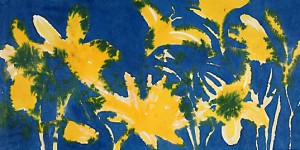 I am a Farang here and the situation seems alien and then bewildering to me. How can this land of smiles be so heartless, maybe I miss the point but I know that ordinary people won’t fight against the army just for a few hundred bhat a day. The thugs who may have infiltrated the protestors and wielded violence just for the sake of it, sure, that’s their way. But farmers and laborers who have real concerns about their chance to earn a living and provide for their families and communities, well no way.  Anyone who thinks that none of the protestors grievances were real are just turning a blind eye on their fellow Thais.

My fear now is that because peaceful protests on the streets have failed by ending in violence and anarchy that the Red Shirt’s hard core protesters could become a true terrorist movement using car bombs and random violence as their strategy. From what I hear this plagues parts of South Thailand. However, in colorful and inspiring Bangkok we are still in the waiting game.  Within a year elections should be called and hopefully the famous Thai smile will beam with fairness to all.

The writer of this editorial wishes to remain anonymous for obvious reasons. To contact him:3wmseoul@gmail.com