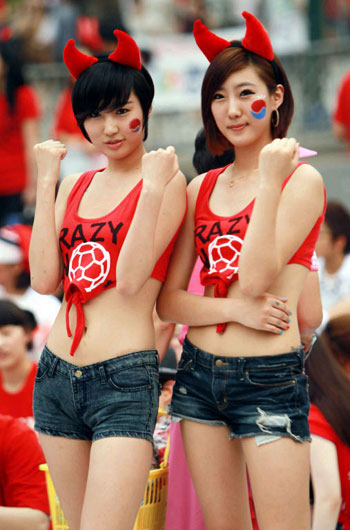 Editor’s Note: Yes, we know Korea is now out of the Cup, but it sure was a show while it lasted.

So, what do red shirts, mildly inspirational 80s-esque pop-rock, cute girls with tacky little devil horns that wouldn’t look out of place at a raunchy Halloween party, and people piling into stadia to watch a game that is happening on another continent (seriously – that is a weird thing to do) have in common? That’s right-the ROK has World Cup Fever.

In case you’ve been hiding in a cave for the last eight years, in 2002 Korea and Japan co-hosted the World Cup.  Such a decision was surprising—no nation had co-hosted before—but what was more surprising was the performance of the national team.   They powered through the groups, the knockouts and the quarter finals before losing to Germany in the semis.  Now, some cynical people think that FIFA were lenient on the Taeguk Warriors because they were a host country.  However, I’m a more optimistic person—I truly believe it was a combination of leniency and dumb luck that pushed the Korea national team through to the semis.  My “dumb-luck theory” is partly proven by their 2006 track record, and whether it will happen again in South Africa remains (at the time of writing) to be seen.

Despite this less than stellar record for the Korean side, their playing at any international level inspires a patriotism from people that I have rarely seen, which is especially surprising considering the apathy Koreans have for domestic football when compared to, for example, baseball.  The Korean domestic league is possibly the most poorly attended professional football league I have witnessed, and it is seriously depressing to see that Seoul World Cup stadium had to be fitted with a shopping centre to make ends meet.  However, as soon as Prodigal Son Park Ji-Sung dons his country’s uniform, football fans come out of the woodwork to fill the 68,000 capacity 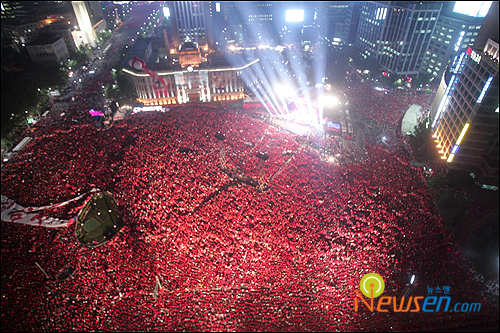 stadium.  But why? Why do people who wouldn’t normally bat an eyelid for half the players on the roster suddenly fall into euphoria for the Korean team? And the World Cup in particular?

An optimist, and the average Korean on the street, would think that the answer is pride.  For all their technical faults and wide range of ability, the Korean national football team is the only team Korea has that can compete at a recognizable international level.  They’ve appeared in the last 6 world cups, 11 Asian cups and in every East Asian Championship since its inception.  Their team captain was the first Asian captain of Manchester United, arguably the most famous football club in the world. That’s a lot to shout about.  Especially when compared to the insane ramblings and poor quality of their northern neighbor’s team.

A more cynical person, however, would argue that it is another way for a minority of Koreans to attempt to express their superior attitude to foreigners.  A recent Joongang Ilbo article referred to the better teams in 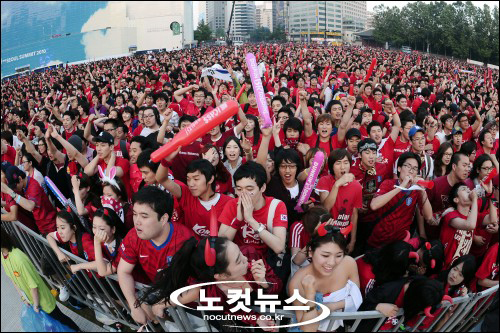 Europe as the more than slightly derogatory PIGS (ostensibly it stands for Portugal, Italy, Greece and Spain) and finished it’s piece with a tenuous attempt to link Greece’s economic standing with it’s football one: “Perhaps Korea’s victory over Greece was partially related to its resilience in this recession. There is no way to prove whether a financial crisis influences a nation’s standing in football but it makes sense that we were reminded of the PIGS as we watched the listless Greek players roll around the field Saturday night.” Perhaps it “makes sense” because of Korea’s history of borderline racist journalism against all foreigners.  Either way, the World Cup has managed to bring out the best and worst of Korean society.

Andy Morris is an aspiring writer, photographer, and daydream believer.  He was born and raised in the UK, and came to Korea to experience life outside the dead industrial towns of his youth.   He currently lives in Yongin City.  He can be reached at andrewwmorris1@googlemail.com.