HomeUncategorizedWorld Cup 2010 South Africa– A Round Up.

After four years of hyperbole and anticipation, the World Cup is almost over. Few months on the calendar command so much effort from the media and our livers. And if you support  Korea or an English speaking nation, few reap so little reward. Maybe it’s because I’m Irish (neither North nor South qualified), or maybe it’s because the quality of the football on show has been so piss poor, but the previous sentiment rings particularly true for 2010’s edition. This has been the most tedious World Cup in living memory. Granted, it has improved slightly as it’s gone on, but at the beginning, it was less like pulling teeth, more like having your legs ripped off by a giant, vengeful spider.

From Italia 90, I remember the evergreen Roger Milla (whose passport was reported to have flattered him to the tune of ten years) pickpocketing the Argentine goalkeeper to send the reigning champions reeling in the first game. USA 94 evokes memories of Bebeto’s ‘baby cradle’ goal celebration for the champions elect Brazil (not to mention an abysmal penalty effort from Diana Ross in an opening ceremony, dripping with cheese). From France 98, Zinedine Zidane’s stellar performances, claiming a first title for the hosts whilst simultaneously announcing himself as the greatest player of his generation, stick out in the mind. Four years later, the over-performance of South Korea as well as Roy Keane’s infamous ‘toys from his pram’ routine will take some forgetting. 2006’s edition in Germany produced one of the greatest passing goals of all time, when Esteban Cambiasso put the finishing touches to a glorious lesson in fluidity that began 24 passes previously. Zidane also took the opportunity to remind us that his temper is almost as great as his talent, delivering a charge at Marco Materazzi in the final that wouldn’t have looked out of place on a goat farm (it’s worth noting that since Zidane’s retirement, France have failed to win a single game at an international tournament).

But this year has been bereft of quality and yet to produce any truly memorable moments. It says a lot when the main talking points have been the cacophonic drone of the vuvuzela and the failure of some of the “top” sides to even show up. This is the lowest scoring World Cup to date. There have been less red cards than four years ago and whilst aggression doesn’t always equal entertainment, I would happily trade some of the snore-fests we’ve had to endure for something even slightly resembling passion . Many will argue that France shouldn’t even have been at the finals, after the Hand of Gaul incident that sent the Irish crashing out last November and there’s little doubting Ireland would have put on a better show. As it is, a nation not famed for its temperament bickered their way through the tournament, limping out after finishing bottom of a group they were clear favorites to win. French Squad captain Thierry Henry has since met with Nicolas Sarkozy to find out what just went wrong. I imagine the pair are still huddled together, scratching their heads in a dimly lit corner of the Élysée Palace, trying to get to the bottom of things. Forgive me, but my Schadenfreude must be allowed to come up for breath occasionally. 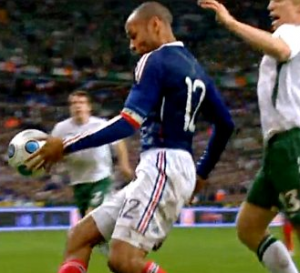 The reigning champions Italy, meanwhile, also faced an inglorious exit. A group containing Paraguay, Slovakia and New Zealand was the easiest on paper and their showing was as much an indictment of Marcello Lippi’s refusal to waver from his triumphant squad of 2006 as it was the Azzuri’s much vaunted, yet universally loathed cattenaccio.  A flaccid England side hobbled through to the second round, to be resolutely dispatched by an unfamiliar, flowing German outfit that will meet the impressive Argentines in the Quarter Final. The English media were quick to jump on the back of Fabio Capello: a coach who has won titles in every country he’s worked. In the aftermath of the 4-1 mauling, one clueless pundit was even brazen enough to suggest that not one of the German players would make the England team, which, he opined is “littered with world class players”.

Whilst Capello did look a trifle clueless tactically (particularly in his replacement of Jermaine Defoe with the lumbering Emile Heskey when the team needed goals) and he fell under the curse of fitting square pegs in round holes that has plagued his predecessors, this “Golden Generation” has underachieved at international level for years. Like the French and the Italians, it’s time for a new approach. Perhaps this dismal showing has provided the kick up the arse required.

Pre-tournament favorites Spain were slow out of the traps, losing to Switzerland and struggling against Chile, but new Barcelona signing David Villa looks to be hitting top gear at just the right time. Worryingly for coach Vicente Del Bosque though, is the form of Fernando Torres. Villa’s strike partner has looked sluggish and off the pace, prompting speculation that he’s carrying an injury. There is more than capable backup on the bench, but the Spaniards’ progression may depend on whether Del Bosque is ruthless enough to sacrifice El Nino.

So, who has impressed? Well the Dutch have cruised through looking more like Germans, and vice versa. The pair will do well to displace the South American duo of Brazil and Argentina, though. 1994’s winning captain Dunga has built a team in his own image: tenacious, efficient and unspectacular. Of course, it is augmented with the flair of Kaka and Robinho, but this is a decidedly un-Brazilian team. The Argentines have (along with the Germans), been the most striking side so far.

Relying, as ever, on tippy-tappy, one touch football, with the genius of Lionel Messi primed to unlock any defence in the competition, they have sailed through to the Quarter Finals. But what makes them infinitely more likeable is the presence of footballing genius and all round mad bastard Diego Maradona at the helm. His last appearance at a World Cup was cut short by his failing a drug test. What odds a triumphant return? Well, having struggled through qualifying and insisting on playing four central defenders at the back, it would seem his tactical nous from the sideline doesn’t compete with his brilliance on the field; but a run to the final is certainly feasible.

Of the less glamorous sides, Paraguay have the joint honor of being responsible for the most boring ninety minutes of my life as they edged the Japanese on penalties in Round 2. I will never get that time back. Uruguay (completing an unprecedented quartet of South American countries in the Quarters), face an athletic Ghanaian side bidding to become the first African nation to reach a World Cup semi final. They may never have a better chance.

And as for the Koreans? Well, they performed admirably: a side with few superstars, well-drilled and playing to their strengths. As demonstrated against Argentina in the Group Stage, when up against competent fire power, they have little answer. The adage also rang true against Uruguay in Round 2. Alas, for half a World Cup, I had a team to cheer for, which added a well needed element of spice. Now that they’re gone, I can go back to bitching about vuvuzelas and bemoaning the benign punditry on every channel I stream. And I can’t say I’ll miss the “Fighting Korea” adverts, either.

Here’s raising a well worn glass to the prospect of some decent entertainment. C’mon, it’s not too late. 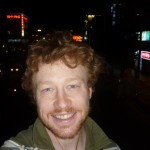 Finbarr Bermingham: writer, editor, Irishman. Wearer of checked shirts, grower of beards… somehow, teacher of English in Korea. Finbarr has haunted the UK’s independent music press since 2005 and has interviewed some of the most celebrated and interesting people and bands around. His journalistic background extends to all things cultural.  Email: finbarr.bermingham@googlemail.com