I jumped, clapped, and whirled around in a circle, doing my best American

ghost dance. Hollering, I let the music get into my blood, into my muscles and move me any way it saw fit. Jim was still on the table doing his magic spaz; the novelty had worn off and the girls looked as if now they were starting to worry. Who was this obviously insane man gyrating and howling dangerously close to their drinks? Sensing their dismay, Jim leapt from the table and joined the dancers on the floor. Soon the crowd was moving together.  We had them now, too much whiskey had gone around this crowd and there was no slowing up its work. Like cancer cells we multiplied throughout the bar, gathering numbers and spreading further out from the dance floor. I sneered at Jim, “We’re gonna tear this goddamn place down.”

Jim was really picking up steam now. Grabbing partners and swinging them around the dance floor like an Olympian doing the hammer throw. I noticed that the front of his shirt was unbuttoning itself and this meant trouble. He was losing his tourist reserve. Suddenly Jim wheeled around on his heels and grabbed me by the collar. I looked up trying to focus on the situation, trying to understand who had grabbed me. In one quick motion he brought his palm up and slapped me on the left side of my face as he held my shirt. I was dazed, had I missed something, did I call him a per 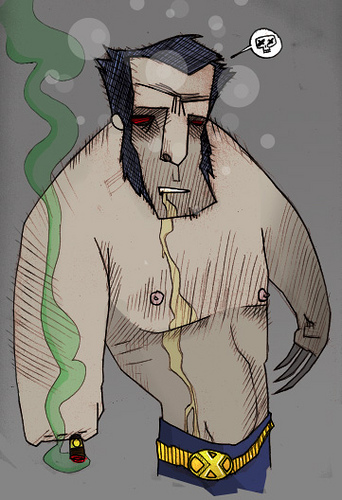 vert? His mouth opened and I waited for the words to come, some wild accusation. He looked at me, dead in the eyes and didn’t say a word. Instead what came out of his mouth was an ear splitting scream. “GGGGRRRAAAAHHHHHHGGGGGGGG!!!!!!”

Jesus Christ! I thought, they’ve turned him into a fucking primordial. Was it the bucket or had somebody done some experiment on him. I’d had just as much as him. Was I in danger of becoming a beserker too? I could see the decline of our night. We’d started out as respectable human beings and regressed to dancing on tables and throwing our bodies on the dance floor like Neanderthals. And now this sonofabitch was a goddamn dinosaur. What next? I could hear the phone call in my head.

“Ma. Hi it’s me. No, no, no, I’m in Cambodia. CAM-BO-DI-A!!!! Sorry, it’s a bit loud. I’m in a bar. Listen something happened. No, I’m not in jail. No, I’ve got enough money. Listen, we’ve kind of declined. We’ve gone back a few steps in evolution. How? I don’t really know how all I know is that Jim and I are now primordial ooze and we’re going back to where we came from so I don’t think I’ll be home for a while. What’s that? Well, we’re gonna crawl our way back to the Mekong and ride the currents out to the ocean and go down in the depths where we can get out of the sunlight. Well, it’s just a hunch but I’m guessing that when the booze wears off tomorrow we won’t want to be anywhere near the sun. I’ve got to go now, my credits running out. Say hi to the family. Love you too; I’ll get in touch when I can.” 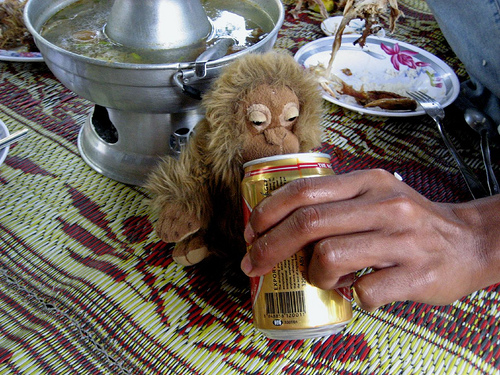 This situation was no good, we were soaked through with sweat and my heart was beating like it wanted out of my chest. It too wanted to join the party. A bartender (who I couldn’t tell was a male or a female?) came from around the bar and tapped us on the shoulder. “You two have to go. You have to get out of here, you’re too wild.” Jim and I glanced at each other, had we just been 86ed from a Cambodian bar? We decided to leave peacefully and wear our banishment like a badge of honor. Surely the place wasn’t ready for our white man’s decline from humanity.

We staggered from bar to bar, still to high strung to call it a night, fueling our body with whiskey. If wine was the blood of Christ then whiskey had to be the semen of the devil. There was no love in this drink, only lust and arrogance.

As the night grew old and bullet proof we started for our hostel, our hearts still pounding in our chests, begging to be set free. The streets were teeming with small Cambodian children selling postcards, ten for a buck. They were spitting out various facts and hoping to hit there mark. “The Capital of Ireland is Dublin. Population 4.4 million,” shouted one. “Australia. The Capital is Canberra. Australia’s main exports are metals, meat and wool,” said a girl in a dirty cotton dress. Another looked at us and said, “America, 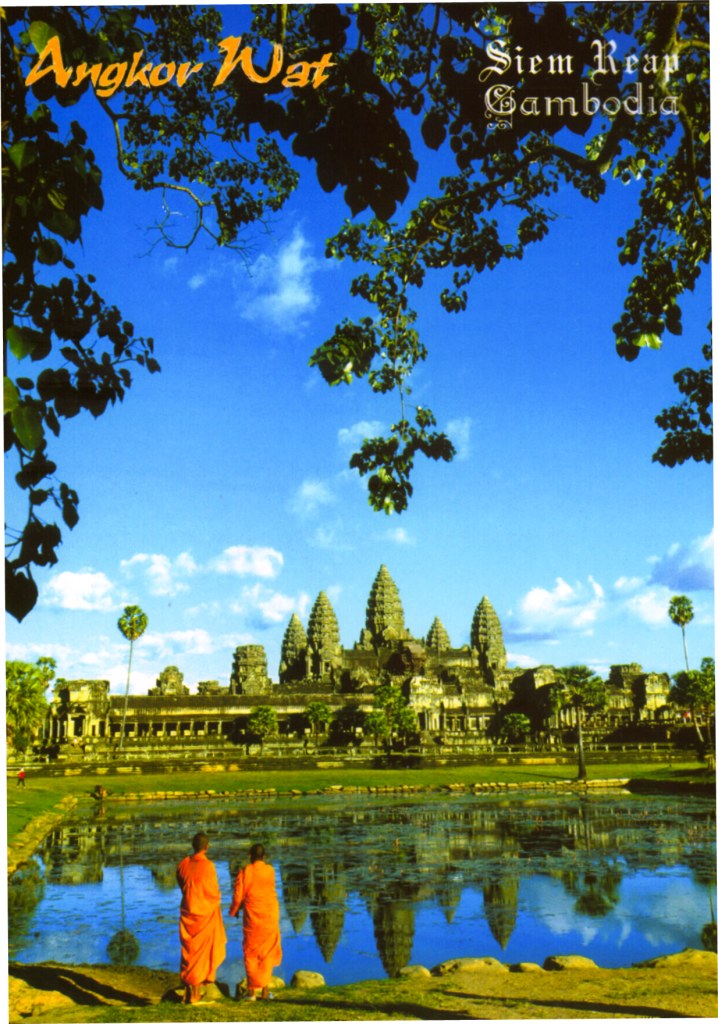 the capital is Washington, D.C. The city was founded on July 16, 1790.” “You’re getting closer,” I teased. Then he opened his mouth and blew me away. “Oregon, the capital is Salem. The Governor is Ted Kulongoski. The population of Salem is 142,940. The place is a shit-hole.” I turned to Jim. “Holy hell, did you hear that?  Buy some postcards from this little orphan, talisman, bastard.”

Ten minutes later and with twenty postcards and a six pack of Angkor beer we found ourselves on the roof of our hostel, alone, and chatting like a couple of coked up Quentin Tarantino cast offs blurting on about our former greatness.

“I was great, ya know. I mean at soccer. I could score from anywhere.”

“I dominated as a youth basketball player, okay. I mean, dominated.”

“I played with some great player’s man. I played against a guy who’s in the MLS.”

“When I left the game, the coach begged me to stay. He fucking begged me man.”

“The guy wasn’t even that good; I nutmegged him. Now he’s in the MLS.”

“Ya remember that guy in high-school? The star guard? I played against him and ate him up, okay. I mean, I put up 30 on him, all going to my left. He couldn’t stop my left.”

“Here I was going left and the guy couldn’t stop me. Nobody could. I had this cross-over, you should have seen this thing, but that’s the trick. You couldn’t see it, ya know. It was just too quick. One, two, and I’d be in the lane.”

After many hours of bullshit and a few more beers, the night started to give way to the day. The first branches of sunlight were starting to stretch their way over the horizon to give us a glimpse behind our hostel. Stretching across the approaching palms stood a Buddhist temple, the walls glowing orange in the early rays of the morning. It was in this morning sun that serenity and sleep would inhale us. Our hearts finally slowed, the talk finally stopped and once again we were decent human beings, the depths of the ocean could wait for us. They always do. 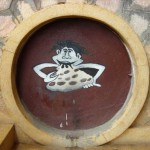