”The Pressures of Genre”

The Rocktigers mix an assertive and proud dedication to a genre I would never have associated with Korean music. Their live shows are energetic and fun. They possess a unique ability to sell this style through sheer attitude. This attitude and showmanship has made them heroes on the streets of Hongdae (club and university central in Seoul), and leading lights on the Korean rock scene. All of which built up my expectation, then it came crashing down pretty soon after pressing play. This album will surely please a lot of committed fans but outside of die hard genre enthusiasts this album just falls flat.

The first track and band calling card “Kimchibilly” is a rollicking two and a half minutes of fun, and not a lot else. Which is a perfectly great way to kick off an album. But when coupled with a song like “Rockabilly Heaven” which does the exact same thing it just gives the listener the impression that this is a band running out of ideas. Instead than really adding anything new to a style they replicate the sound and image in a way that at times becomes mere pastiche.

This isn’t to say that there aren’t great songs on this album. “I Wanna Rock,” “Vengeance is Mine” and “새벽2시(Two in the Morning)” just seem much more thought out than allot of the other songs here. They allow singer Velvet Geena to stretch herself as singer and show some emotional depth in her voice. The songs themselves also offer a depth of songwriting that is lacking on more kitsch songs like “ZombieNight.” “새벽2시” creates a darker, more pained take on Rockabilly. The surf guitar, for once, takes a backseat and becomes more of a mood peace, giving the song a kind of paranoid 60s LA sound. The song shows the band stretching the parameters of their genre into brilliant new territory. Album closer ‘I Wanna Rock’ is the shortest song on the album and has a visceral edge to it that is just lacking on the faster tracks presented. It’s a song that realizes the pastiche that this band trades in and just has fun.

Where the album falls flat is in production, album pacing, a completely skippable middle and a weak rhythm section. The album starts well with a burst of energy followed by the depth of “새벽2시” and then falls off into six or seven songs where nothing is risked and nothing new under the Easter rising sun is revealed—very similar songs with very similar rhythm sections all played together so that is hard to actually remember any of the interesting parts.

Then the album is saved by a great ending. The production here is proficient but just completely directionless. The brilliant lead guitar work is highlighted throughout the album making the rest of the band suffer, particularly the bass and drums but then again when the rhythm players are as lacking in ideas as they seem to be here maybe that choice was excusable. The biggest problem with this album though is that the Rocktigers struggle with pushing and resetting the Rockabilly genre. The Rocktigers half-jokingly call themselves “Kimchibilly,” but there is so little added to the staple Rockabilly sound that the only standing out here is the fact that the songs are in Korean. A band claiming to the “Pioneers of Korean Rockabilly” should be providing genre anthems that go beyond making kitsch. 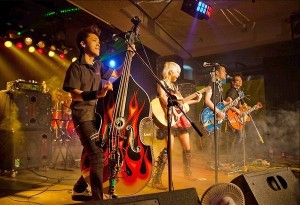 “Licence to Rock” has so much going for it. And these songs will obviously work brilliantly live where the showmanship these musicians have shown throughout their careers can add some fun and brighten up these songs. Because the shocking thing is that band so full of charisma and excitement on stage have produced an album that just falls flat and the majority of the album is frustratingly one note. We do expect that sometime soon the Rocktigers can reinvent, “Kimchibilly” and that is worth waiting for the foot-tapping and howls that can come with their next record.

Bio; “Somewhere I had come up with the notion that one’s personal life had nothing to do with fiction, when the truth, as everyone knows, is nearly the direct opposite.” Contact: reallyjohnflynn@gmail.com

In Thailand? BP wants to go drilling there too. Protest organized for Koh Samui July 31st.