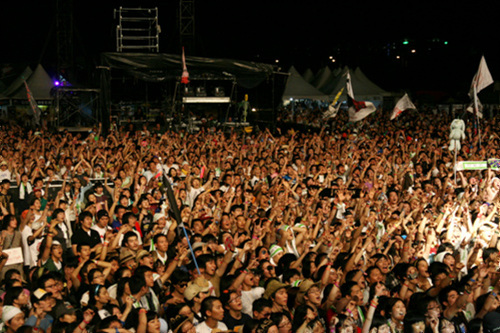 Now in its 4th year, the Pentaport Rock Festival has always been the “little brother” of Asian music festivals.  Despite hosting such acts as Travis, Franz Ferdinand, Stereophonics and The Chemical Brothers since its inception, it has struggled to get a line up of “big” names, thanks in no small part to festivals such as Jisan Valley Rock festival and the Fuji Rock Festival in Japan.  That said, it still manages to draw large crowds. This year, Pentaport managed to pull off something of a coup, with punk/dance media darlings LCD Soundsystem appearing on the bill after the release of what has been confirmed as their last album.

When I went down on Saturday, the lineup was a bizarre mix, ranging from J-Pop to J-Thrash Metal via K-Rock and US Punk-disco.  There were also a range of DJs and dance acts to satisfy those who weren’t interested in the bigger acts, and for those who paid ₩70,000 and did not want to see the live acts, there was also a live feed showing the day’s Korean League baseball action.  Something for everyone.

The first act I saw when I got there were J-Pop visionaries Kishidan.  As is apparently their style, they were dressed in matching black and purple costumes with ridiculously adorned hair that gave the whole thing the appearance of a Japanese Gary Glitter cover band.  The set was a mix of comedy, dance routines, and family friendly sing a long anthems.  Personally, I would have thought a troupe of pop singers wearing matching outfits would have spread an anathema to the rest of the day’s lineup, but the crowd seemed to love it.  Their style of inoffensive sing-along songs about loving your school sweetie were so sugary that I may have become diabetic, but they also had a couple of danceable songs too.  Kishidan did what most opening acts should—be OK without setting too high a bar for the rest of the festival.

Next up on the main stage was the Yoon Do Hyun Band, or YB, to give them their street-cred name.  These guys belong in the “OK” camp along with Kishidan, but possibly a couple of steps up in terms of quality.  They had a good command of the stage, with lead guitarist Huh Joon being a standout performer.  Their set was a lot of enjoyable but ultimately forgettable rock; let’s put it this way: I couldn’t tell you now how any of their songs go.

What came after on the secondary “dream” stage was a first for me: a Japanese heavy metal band: Wag Dug Futuristic Unity, a band that is fronted by Hiroshi Kyono, the former leader of Mad Capsule Markets.  I never really considered Mad Capsule Markets to be an entirely metal band, more of a group that jumped between genres to suit their mood at the time of writing and recording.  I feel it’s important to say this before I give an opinion on their set; I wasn’t a fan of heavy metal music before I went into that tent, and I wasn’t a fan when I came out.  However, this style of music does lend itself to some extremely energetic live acts, and they were no exception.  At the very least, it taught me one important life lesson: Koreans may not seem the type on the surface, but get them into a mosh pit and they hold their own with the best of ‘em.

A combination of the world’s longest men’s room queue and the world’s most poorly timed bathroom break led me to nearly miss the three song window I would have to shoot LCD Soundsystem.  As we sprinted across the festival ground, all I could think of was the praise they had gotten from those of my friends who had seen them at Hyde Park a few weeks before: “They’re better live,” I was told.  Seeing as I already loved them, I was eagerly anticipating their set.  After a slightly damp squiby start—Us V Them is not the greatest they’ve produced  the energy levels started rising with barnstorming renditions of Drunk Girls and Pow Pow to really get the crowds going.  LCD were clearly enjoying themselves on stage, with James Murphy taking the time to talk about previous Korea experiences instead of the generic thank yous and kamsahamnidas offered by other acts.  The thing that made this a great live set was that the “oh-here-we-are-performing-in-Asia sheen” was gone.  The live version of Daft Punk Is Playing At My House had more prominent guitars than its studio counterpart and it was all the better for it.  This coupled with the confidence that they exuded made for an electrifying set that is easily in my personal top five of all time, and second only to Prodigy for acts I’ve seen in Korea.

Giving Hoobastank, a band whose last great hit was 2004’s “The Reason,” top billing over LCD Soundsystem was a critical error in my mind before I’d even seen them play.  This thought was confirmed when their set paled in comparison to their predecessor’s.  Whereas LCD started off poorly and then improved dramatically, Hoobastank started off really strongly, performing their breakthrough hits “Crawling in the Dark” and “Running Away” with aplomb.  However, the set quickly fizzled into tracks that would not have been out of place in

a soundtrack compilation for The OC, with one track hard to pick out from the other without introduction.  By the time frontman Doug Robb whipped out his acoustic guitar, it was time to call it a night.

With such an inconsistent lineup for the biggest night of the festival, it’s small wonder that Pentaport has struggled to break out from the shadows of the and the Fuji Rock Festival.  However, the lineup is getting more and more impressive.  If it can bring in more Stereophonics and LCD Soundsystems than Hoobastanks and Ian Browns, then it can become an equal partner in the East Asian festival scene.

Andy Morris is an aspiring writer, photographer, and 20th Century Boy.  He was born and raised in the UK, and came to Korea to experience life outside the dead industrial towns of his youth.   He currently lives in Yongin City.  He can be reached at andrewwmorris1@googlemail.com.