My wife Kwon-soon woke up at about 4:30 a.m. to go to the bathroom. She didn’t come back to bed right away so I asked, “What’s up?” She said, “I’m bleeding a little bit, but that’s supposed to happen.” She continued to putter around the house, so I said, “Do you think we need to go to the hospital?” She said she didn’t think so. After lying in bed for about five more minutes, I decided to get up and screw around on the computer (since I couldn’t sleep). 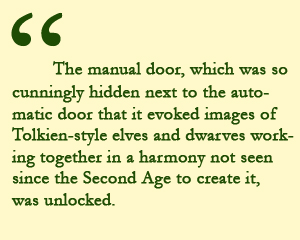 too?” She did and I did. We calmly got the stuff together that we’d prepared for her hospital stay. I typed a quick joke on Facebook that real life didn’t seem to reflect what we see in sitcoms. By about 6 a.m. we were out the door.

Since Korea doesn’t have daylight savings time, at 6 a.m. here, it is already completely daylight. We were walking down the street to the bus stop/taxi stand, and my wife said she had forgotten her cell phone. I ran back up to our apartment building and grabbed it and met her back down on the corner. We took a taxi since there were so many just sitting around. The weather was beautiful. My wife remarked how peaceful everything seemed early in the morning in our neighborhood.

We got to the hospital but found that the door was locked. We followed a sign saying to go around back for emergencies. There was a very explicit sign showing the route to take after you leave the elevator, even going so far to say that the door was 2.0 meters in front of you (I found that to be excessive explanation.) We took the elevator up to the 4th floor, and found that door also locked. My wife and I both realized we had noticed an intercom phone down on the first floor by the elevator so went back down the first floor and 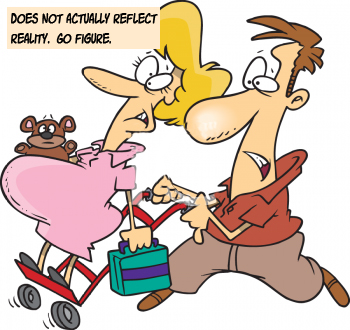 tried to use the phone. It didn’t work.

We went back outside to the front and tried the intercom next to the automatic door. It also didn’t work. You probably imagine at this point that if I were the kind of person to lose my cool, I would be steamed at this (because I have, in particular, zero tolerance for what I perceive as “Korean-style” nonsense). Having reconciled myself to the fact that I am only exhibiting a normal amount of ethnocentrism, I asked my wife what she thought we should do. She expressed her dismay that they didn’t even have a phone number posted (what did I say about Korean-style nonsense?).

At that exact moment, a scrawny old security guard appeared from around a corner. I can only assume now that he thought neither of us spoke Korean well, since he mimed opening the door. The manual door, which was so cunningly hidden next to the automatic door that it evoked images of Tolkien-style dwarves and elves working together in a harmony not seen since the Second Age to create it, was unlocked. Neither of us had noticed it (because neither of us was a wizard).

We got into the elevator and rode up to the 4th floor—that was where the moms go when they are checking in. I had to wait outside in the hall for a few minutes and amused myself by watching a movie on my PMP.  After about thirty minutes, a nurse came to get me. My wife was in a bed in a shared ward sort of like an emergency room. There were a lot of curtained-off beds. There wasn’t much room for standing and no place at all to sit. She told me that we had forgotten the umbilical cord-blood donation kit (in Korea, apparently it is recommended that you don’t store your own baby’s cord blood. Allegedly, the industry is not regulated well enough to satisfy paranoia that you may be paying for a service that may or may not provide you with a non-contaminated product if or when you later need it.) She suggested that I go home to get it, but also that I should just stay there for a few hours. My wife’s water had broken, but she wasn’t having any contractions yet. They had hooked her up to an I.V. with oxytocin (presumably) in order to start labor.

I came back at about 11:30 a.m. to find my wife in a private room, having contractions. She told me the nurses said she might lie there like that for several more hours. She was really worried about closing up our school for the day, so she said I should just go and have classes and then come back. I left at about 1:00 p.m. At 3:45 p.m., Kwon-soon called and said that she had delivered about one hour before (at 2:42 p.m.)  Her delivery was as problem-free as her pregnancy (ultimately).  Throughout her pregnancy, she had mentioned that she never really felt pregnant.  She had worked until about eight days before her due date.  We had gone hiking on the mountain next to our house the weekend before.  She was in “labor” for about two hours (total), and suddenly our baby had joined us in the outside world (without me being there to help greet her).  My student was concerned that something bad had happened because of my reaction over the phone (frustration at h

aving missed the birth).  I was immediately reminded of that line in AMC’s Mad Men: “One minute, you’re sitting in a bar and someone tells you your kid’s been born; the next minute they’re going to college.”  My wife did a good job of assuaging my guilty feelings. I had to finish my classes and then I took the bus over to the hospital where I got to see baby Grace for the first time. She was already about four hours old.

The Han-hwa Eagles—my wife’s favorite baseball team—lost their game versus Samsung that afternoon (as per usual) and the fact that my wife grumbled about the result told me that everything was going to be fine. We’d managed to make a baby.

Resident cartoonist Lee Scott occasionally contributes to 3WM. He is or has been an avid: gamer/reader/writer/designer/cartoonist/developer/hatchet-man/teacher/entrepreneur. Most of all, he’s a father.