Death and Resurrection by Rotating Blades is the name of an new art show at Space Hamilton in Seoul, South Korea where two Korean-American artists, Jean Rim and Katherine Oh, (who also go by COOP, Inc.) will try to bust the electric fan death theory, an erroneous belief held by Koreans. It is believed that an electric fan left on overnight in a closed room can cause death by suffocation or hypothermia. There are several theories: a vortex is created by the fan and sucks the oxygen from the room; the fan chops up all the oxygen molecules in the air leaving none to breathe; the fan contributes to hypothermia by lowering the room temperature; the fan displaces oxygen and raises the concentration of carbon dioxide gas without affecting the nitrogen gas content, causing asphyxiation. [1]
Raised in America as the offspring of Korean parents, they were relentlessly cautioned about the perils of the fan. Even their fathers who are the most logical beings on Earth one an engineer and another a Neuroscientist would turn off the fan in the middle of the night with a feverish speech on the dangers of the Fan!
The artists themselves believed the warnings and tales with anxiety but began to doubt the theory like many of their generation.  The real question is when did one stop believing in Santa Claus? Is there a giant alligator in the sewers of NYC? Or a monster in the Han River? How fun it is to believe~ but what is the truth?  Is it true when  many people believ 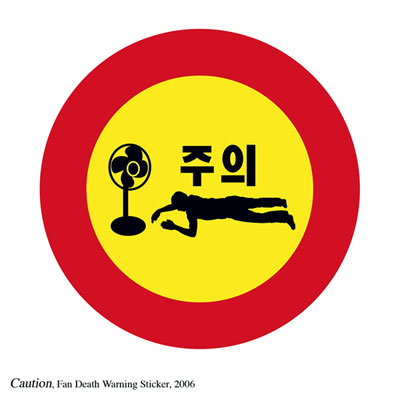 e in it that it can create a reality? I mean did a tree fall if no one saw it?  There is something to be said about being better off safe than sorry right?
Coop, Inc wants to respect the believers and at the same time play with the idea and question it.  Jean Rim says to bust the myth and Katherine Oh is a little wary.  The later said when she was researching all the recent articles in  Korean periodicals and newspapers which gave acute details for all deaths by an electric fan she felt her blood pressure rise and the invisible blades coming for her!
Death and Resurrection by Rotating Blades is a celebration and offering to the Fan Gods for surviving the summer unscathed. Visitors can journey on a cautionary yet celebratory voyage through COOP’s multi-disciplinary practice of painting, drawing, sculpture and installation. Actual reports of fan death will be displayed on the main window of the gallery. The space inside will be transformed into a quirky temple, where visitors can pay homage to the Fan Gods while basking in the virtue of the altars, floor mandala, and prayer wheels made of actual fan blades. COOP will sleep in an enclosed room with a running fan for about six hours at Space Hamilton in hopes of debunking the myth of fan death. Six hours is equivalent to a good night rest, no? The door to the room will have a small window so the public can observe and pray for them and vieweres can see us through the a small window from the outside of the gallery. (www.spacehamilton.com)
COOP, Inc. will inaugurate the week long show on Thursday, August 26, 2010 from 6 – 8 p.m. with a special fan dance performance and soju fresh fruit cocktail.  Followed by the artists’ performance the next day Friday, August 27, 2010, 5 p.m. – 11 p.m. then to keep the party going if its not a funeral on Saturday, August 28, 2010 with DJ Shannon Aston which will kick off at 4 p.m., there will also be local indie bands performing. For more information please visit the Web site www.wearecoop.com.