EDITOR’S NOTE: This is the beginning of 3wm taking an unflattering at times but always street level view of the “cult-of-cool- in Seoul”. For a previous 3wm essay review of Hipster bourgeois pretension check this “Theater Review”

Why I hate the HBC Fest.

The HBC Fest, which apparently stands for Hae-bang-chon (how creative), is being unofficially renamed by me as the Hardly Bothered Coming Festival®, and I am going to tell you why!

Before I start complaining about it, I just want to let you know that I’m sick of it already! You’d think that after four years people would know about it and I’d have the freedom to spend my time looking for something better to do when the time comes around. It makes me feel like I have a stutter every October and May and I end up having to repeat myself in a different way. Well it’s not my fault; I know everything about it already. 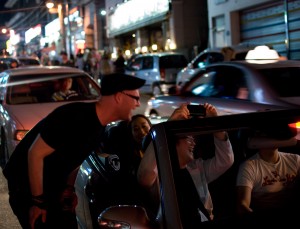 For starters, the bands are all new! Why should I be bothered coming and listening to music I’ve never heard before? I remember back in the day when I was a household name and leaves whispered ‘there’s Conzie’ as I passed, I knew all the bands, great bands, but none of them exist anymore (except for LRD), they all left, they left and went home! And it’s because of this that I refuse to like any more bands! Yeah, yeah, I know some of the bands have mixed and matched to form Super-Bands, but they’ll never be as good as Led Zeppelin, so why do they bother?

While I’m talking about the music side of things, here is a big, big warning for you; the Hardly Bothered Coming Fest® is the largest collection of white people with guitars[i] you are likely to find in the world, fact! It’s a little phenomenon in Korea where all these people with guitars appear from their summer haunts all on the same day and converge on Haebangchon, all walking around with their guitar bags on their backs like elk with big antlers! Then all of a sudden they all vanish and scatter off to hide in open-mikes in Itaewon or wherever it is their E-2 visa contract has landed them for the year. This kind of transhumance migration can be witnessed again in the month of May when the warm weather comes back.

All these people who wander around flashing their instruments (musical that is) are what can be further described as the species, English teacher in Korea. Yes, these English teachers, guitars or no guitars, come to this festival as a means of furthering the process of inflating their egos and being “cool”, essential components for surviving life teaching in a hagwon in some dead-end corner of Seoul. If you look carefully you can see the white board marker stains under their fingernails, and the noticeable smell of urine which despite popular myth does not resonate from the toilet in Phillies. No, this smell is the leftovers from the kindergartner’s toilet, permanently stuck to the millions of shoes that flock to the Hardly Bothered Coming Fest® all in the hope of eluding the clouded sense of responsibility their occupations have apparently forced upon them. 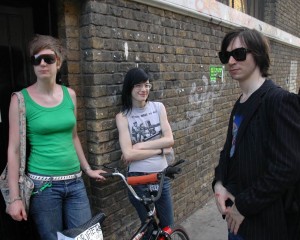 Don’t let this fool you! The whole festival is a massive outlet for people trying to be cool, trying to be real, trying to festival. It’s a place where people try to escape into the streets, have run-ins with the 5-O, dress over conspicuously and raise their chin higher than the person they are talking to. This is a place where people walk down the street with an empty guitar case just to get the nod from a fellow case carrier. Yes, the Hardly Bothered Coming Festival® really is a wonderful place to be cool. Disgusting!

Even the things you’d think would be worth coming for aren’t worth coming for, like the venues for instance. Despite mammoth efforts by the mighty masses at the last festival, the road has yet to be sealed off for a stage to be erected, major corporate and media sponsorship attained (I’m a fan of Jinro, Lotteria and Samsung but only because we are in Korea)! Until that day, we are stuck with listening to music in the bars … which actually aren’t that bad, believe it or not.

If the neighbours don’t start throwing mud at the performers this time some of the venues might be worth checking out, but I can’t imagine too big a crowd. Why? There’s too many stairs, that’s why! It’s obvious from all the people who buy their booze in Kobawoo Supermarket and hang around outside Pita Time; festival patrons at the Hardly Bothered Coming Fest® have issues with walking up and down stairs, let alone the hill all the way to Jacoby’s (to this day I’ve never made it past Phillies). It’s no surprise because, in fairness to human decency, who comes to a festival to walk up and down stairs all day? Even if you do make it down/up the stairs, it’s too hot or the band is too loud and the barperson (let’s be gender friendly) is enjoying the music or bantering too much! Sure, you could move the music upstairs but then the neighbours would start throwing mud again. Nobody is ever happy!

Anyway, it’s just as well most people never experience the problem of the heat/noise/barperson having a good time because they’re too damn lazy to walk down/up fifteen bloody (not actually covered in blood) steps! Fifteen steps!

So in honour of the fifteen (give or take a few) steps into many of the venues, I am now (otherwise it’s likely I’ll go on forever) going to give you fifteen steps where you won’t burn any calories, but you will gain an idea about how you can enjoy and understand the Hardly Bothered Coming Festival® more:

Conzie is the peaceful type. Never one to start a fight and always one to believe in the inner-decency of his fellow man (the species), Conzie has in the past managed and promoted a number of HBC Fests, notably the first Howlin’ Weenie Fest in 2007. Since then he stopped being popular. He is secretly bitter about his fall from grace and nowadays complains to himself regularly.

The New “General” in North Korea