EDITOR’S NOTE:
This is the second installment of a series culled from letters about teaching English in The Bronx, New York. The next installment will run right around the Holidays.

Well, this Ellis Island trip was preceded by several months of the students learning about the immigration history of the USA, spanning from the 1850s to the 1920s, within that period two large waves of immigration occurred. Within the last two teaching months, trying to get the students “hooked into it” wasn’t easy. For starters or “Jump Street” as we used to say in the Bronx, we talked about how they are the new 21st century immigrants. 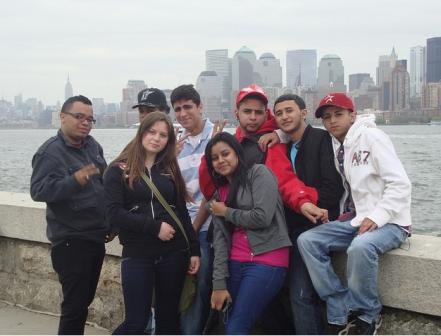 I also used a variety of materials to interest them including short stories, poems, videos etc. I also had them do group projects which I was hoping would further engage them and do a little bonding with each other.  Did it work? Well for some it did.  The grand finale was to bring them to Ellis Island: a living museum which would connect their learning to real life.  Most of them had never been to the Statue of Liberty and/or Ellis Island. From a class of 30, 20 decided to come, the group including students from Albania, Yemen, Palestine, Bangladesh, Dominican Republic, Puerto Rico China, Korea (of course) and Vietnam. Working with so many different ethnic groups was challenging but after while you know what to expect and my strategy was to try to get them thinking about that now they are here in New York and for better or worse  all part of the same world.

To plan out this class excursion, I had to make reservations with a tour company for group tickets. I gave the permission slips two weeks before the day of the trip. Knowing what was to be expected in regards to students returning them; well most gave them to me the day before.  It is always fun to figure out how many are going and reserving tickets just the day before. So on the day of the trip, on my way down to Battery Park on the subway, I am on my cellie calling the tour agent to tell her exactly how many of us will be there in one hour! Funny thing is she kind of expected that last minute dash—like she was used to it. I kept telling myself this will be worth it. These students better get something out of this for all the headaches I am dealing with.  Getting back to that morning at the school when we left, all the students were to meet me in the library so we could leave on time. Most did meet-up but surprises are always coming, Aysha (Bangladesh student) wants to bring her friend. No problem, yet that entails running around the school so this “friend” can get permission from all her teachers, then finally asking the principal’s permission. Ok, now three students are missing, what do I do? Just leave? Oh no I put too much effort into this. They all have to show. We wait and wait forty five minutes. We leave the building and leave the exit of the school. The 3 missing students are outside the school waiting to get into the school!!!  They were late and the security screws wouldn’t let them in.  There was a third student who was a friend of one of my students.  He just tagged along.  I thought I might have an extra ticket so why waste it? No time to enforce the rules with regards to permission slip, join in! So they jump into the group procession to the subway station. We leave and head to Battery Park, from where the ferry departs. All safe on the subway, yet while on the subway I was hoping that they would speak to each other in English, but most pull out their iPods and ignore each other. I realize here that this there trip and whatever influence I had on it was already made. So, we make it safely to the boat, weather was cloudy but no rain. We go through the security checkpoint with not confrontations from or with any of my students.

But no rain. We make it on the ferry. Luckily no rough waters, but it was not as calm as one would like it.  Students start complaining about getting seasick and ask,

“When we goona be there?” 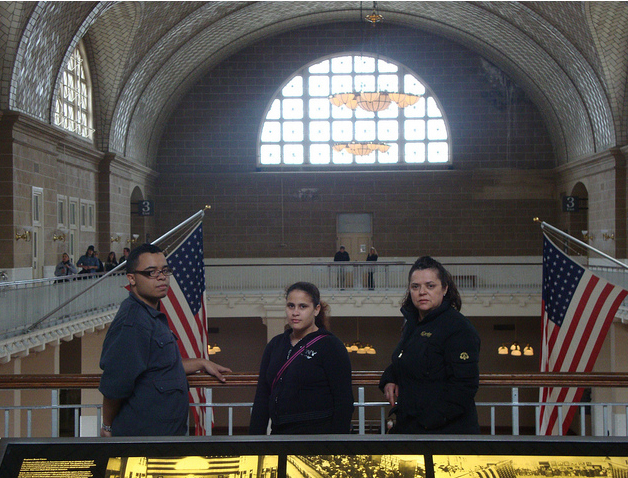 Don’t worry I assure them, soon enough. They notice all the landmarks: Statue of Liberty, Wall Street etc.  They are snapping pictures and enjoying the ride. Most have never been on the ferry (or on the water) in New York or near the Statue of Liberty.  And strangely or not most have been in living in one of the boroughs for some time.

We arrived on Ellis Island shortly after the 25 minute ride. Odai (student from Palestine) is screaming and yelling that we made it alive and checking to see if anyone was hurt. He sounded out loud what I was thinking which was that we made it here with no causalities.  We exit the boat and move into the Grand Building. I run to see if the free movie can be seen right away which introduces the visitor to Ellis Island. And I guess because we used a travel agent there was no hitch to that. It was great to see as we were moving along, students pointing to objects they had recognized from the class. The movie is good and then the students start complaining that they are hungry. It is noon and they are fit to be tied. I wasn’t going to stop now because they all promised me that they would eat a big breakfast just in case. So we continued the tour which included the inspection stations that the typical immigrant had to pass through. I had given them a handout which they had to take notes and answer questions on relating to what they saw. Odai continues to listen to his iPod, and as I started questioning him, he defends himself by saying he’s just happy to be alive and he’s getting it all down.   We finish most of the stations and believe it or not the students are doing the work. With only a few complaints that they are hungry, we continue to march on. Almost finished.  We go to the cafeteria and hop on line. Fast food is always their favorite, and with an abundance of that available! No complaints now.  We enjoy the outdoor seating, the view of the Hudson River, The Statue of Liberty and Manhattan.   They are running around snapping pictures in an abandonment that sucks to see in the the classroom but it all makes sense here. They start standing on the embankment talking out over the water dangerously, ready to slip and fall in! Hey, anything to get the shot. I have to start screaming for them to get off the wall because one their original concerns about making this trip is that few of them can swim.  Well they are laughing at the teacher Mr. Dello now and I realize that they are just happy that they are here and it’s their way of saying thanks to me. 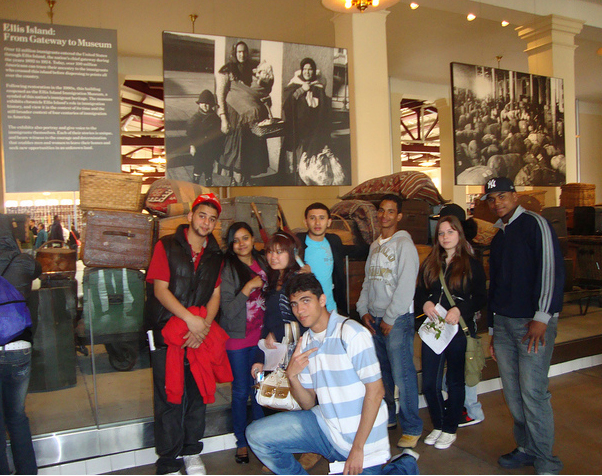 We finish and head back in to the souvenir store .  They are enthralled by what is there. I am waiting outside for them to finish.  Haitham (student from Yemen) starts telling me that the friend he bought with him got a nice key chain of the Statue of Liberty to give to me. I comment on how nice it is and that his friend should keep it, and then Haitham tells me that his friend stole it. I can’t tell if this is another part of the joking or not and have to start reprimanding him.  He throws the key chain in my pocket and starts laughing; he says, “You can have it”.

What does a teacher with a stolen key chain in his pocket do now? Well wish I had East Asian English students for one thing and then I had to think fast: run the other way or return it. Okay, I slip into the store and drop it on the nearest shelf and slip out. Meanwhile, all of the other students are screaming at the Bangladeshi girls to, “Get out the store we got to go”.  We make it out of the store and on to the last exhibit, “Souvenirs from Home”. A beautiful display of artifacts (clothing, jewelry, books, etc) of all types from immigrants who passed through Ellis Island.  What a nice display. They examine the items and are required to draw one on their handout. Most do while a few are running around, looking at all the pictures of many faces of immigrants on display.  You know the roll call: the poor, the tired, the huddled masses. It is getting late so we quickly run to catch the ferry. On the boat and back to Manhattan.  On the return, the group is running 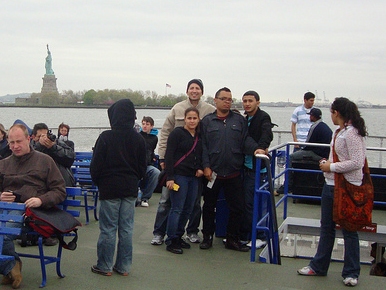 around snapping photos. They want to come back again saying I should take them straight to see to the Statue of Liberty.

All and all I think they enjoyed the trip and took something back with them. As immigrants themselves they understood their own struggle but got to see the struggle of those immigrants who preceded them.  It was so cool to see them in a different environment other than the ghetto. They were transformed.  We reach Manhattan and we run off the ferry to catch the subway. I think I lost a few as I was running. Some were too busy watching the street dancers. As we wait, those missing finally show up.  Johan (from Dominican Republic) shows me a fresh portrait of himself done by a street artist. Nice, he is excited. The train comes, we all jump on.  Heading back to the Bronx.  The next day, the students come in all excited about the trip and share it with the others who didn’t go.   Was it a success? Statue of Liberty here we come!

In the next installment Remo Dello takes his class to “Lady Liberty.”