HomeReviewWINTERTIME by Charles Mee: Nice Production but Where’s the Play?

Nice Production but Where’s the Play?

Reading up on Charles Mee in preparation for this show I found myself feeling a little guilty for never having heard of him before. With a career spanning 50 years, Wikipedia describes him as “an American playwright, historian and author known for his collage-like style of playwriting that utilizes radical reconstructions of found texts.”

He is a prolific writer who has worked in a variety of mediums , was part of the off-off Broadway scene in the 60’s and was involved in political activism in the 60’s and 70’s. He recently worked on a collaboration with the great Shakespearian scholar Stephen Greenblatt, and he currently teaches playwriting at Columbia. His radical approach to his work extends to publishing the full texts of several of his plays on the Internet; as far as I am aware he is the only playwright to do this. Bearing all this in mind, I can only assume that Wintertime is not at all representative of Mee’s work in general.

Far from being radical or revisionist, the play is vague, bland and structurally bizarre. The first half is particularly bewildering. An ensemble of personalities populate the stage (I hesitate to call them characters as the word usually suggests some kind of motivating force, which is entirely absent here): a couple of young lovers, a French lothario, his sensual Italian lover, her laconic ex-husband, his lover, and some hysterical ageing lesbians. These archetypes/borderline archetypes, skillfully played by a talented cast, as well as the one room set, suggest the scene of a farce. Mee himself states his influences for the play as the likes of Moliere and Magritte. The play does not, however, follow the trajectory of a traditional farce in that there is no set up to any of the action. Unfortunately, neither does it have the courage of its convictions and fully re-invent the form. 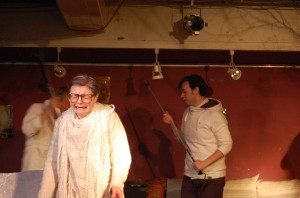 There are some nice set pieces, notably a fight with a chair and a choreographed slamming of a room-less door. But, there is just no justifiable reason for them to be there in the first place. The fight with the chair is particularly flat without the logical build-up of anger to precede it.

Mee throws in a few other tricks such as the word-for-word repetition of speeches by different characters. Again, there is no narrative (even in the broadest sense of the word) for the action to hinge on. The theatrical conceits are neither dazzlingly original nor fully committed to. The repetition in particular has been done far more effectively in Caryl Churchill’s Blue/Heart, two short plays that take a single conceit and run with it. There are some really funny lines and several short monologues that hit on some nice rhythms, all well-executed by the cast. The disjointed nature of the play as a whole, however, detracts from the humour or pathos of these segments. The performances are meticulously crafted with well-observed mannerisms and excellent timing, and yet even these seem a little stale. Three nights into the run I had the feeling that the actors had worked out where the laughs would be, and would occasionally fell prey to that off-putting habit of smiling at their own lines.

But then, it is difficult to criticise actors for not staying in character when there are no characters as such, and I suspect that even these small faults in the production stem from the play itself. Elsewhere the production was accomplished, using a corner stage that helped lend a sense of animation and prevented the blocking from appearing static. The second half was much better. Hinging on a single dramatic event, Mee gets away with his more absurdist asides, such as the delivery man’s hilarious ‘pygmy’ speech. The actors relish their parts, and I have to say that by the end they had almost won me over. Admittedly the drama occurring in the second half is not foreshadowed in any way in the previous half but, taken on its own merits, it’s a nice ending to a possible play. 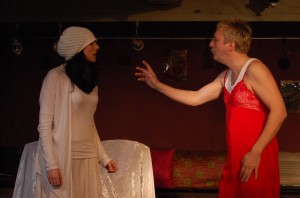 Weirdly for a playwright who emphasizes the importance of cultural context – “the culture speaks through us, grabs us and throws us to the ground, cries out, silences us” – Wintertime is virtually impossible to date. It could have been written anytime from the 1960’s onwards. It did in fact premiere in 2005. Not that I would have wanted any crass post 9/11 references – I could do without the suicide bomber dropping in.

But there is nothing in the voices or the form that feels fresh or exciting. I am not a huge fan of the farce, but I do believe that as a form it offers possibilities for theatrical invention, and that is has been successfully re-invented in the past by writers such as Joe Orton or Alan Bennett. In the present case, there is nothing particularly new or interesting in terms of form or content. Mee is very articulate about his own plays: “My plays are broken, jagged, filled with sharp edges, filled with things that take sudden turns, careen into each other, smash up, veer off in sickening turns.” It is always difficult when playwrights become their own connoisseurs but Wintertime is not the pretentious drivel you may fear. Unfortunately, neither does it warrant such enthusiasm.

To be fair I should finish by saying that I don’t think that my reservations were shared by the rest of the audience, who laughed unrestrainedly and seemed to genuinely enjoy the piece. However, this may be testament to the energy and skill of the actors rather than the merits of the play. I look forward to seeing all the actors again, working with stronger material. Wintertime is playing at Roofers until Sunday, December 12 Charles Mee’s homepage (including full texts of his plays): http://www.panix.com/userdirs/meejr/indexf.html ____________________________________________________________ Maria Borland was involved in fringe theatre in Edinburgh and London before she started teaching English. She continues to write plays. Contact: mariaborland@gmail.com