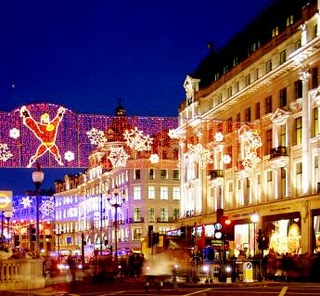 It suddenly dawned on me this week just how close we are to Christmas.  Living in a non-Christian country, and surrounding myself with predominantly secular friends, means that it sneaks up somewhat.  Not that I’m a particularly avid fan back home, but this week would normally have heralded the time when I returned to the family nest for a week or so, becoming once again inundated with mince pies and marzipan after a 12 month absence.  It’s fair to say I’ve given it little thought this year, bar a brief stroll along Fashion Street in Nampodong, which seems to be crammed with as many decorations as Regent Street and Covent Garden combined.

On that occasion, surrounded by young couples giggling beneath the lights and even younger families clambering across the nativity scenes, events felt no different to those unfolding on the other side of Eurasia.  I squinted against the lights and stepped as nimbly as possible around swarms of children in exactly the same way as I’ve become accustomed to doing on any given December in the UK.  Yet somehow it felt much fresher, as if re-injected with the joie de vivre that is annually sapped from festivities back home by a combination of spiky anti-capitalist editorial pieces and cold-driven pedestrian rage.

Hailing from a cynical little island in the North Atlantic ensures that I’ve been exposed to more than my fair share of raised eyebrows with regards to December 25th.  The old clichés about its fraudulent familial veneer and cold, cash-driven heart are so 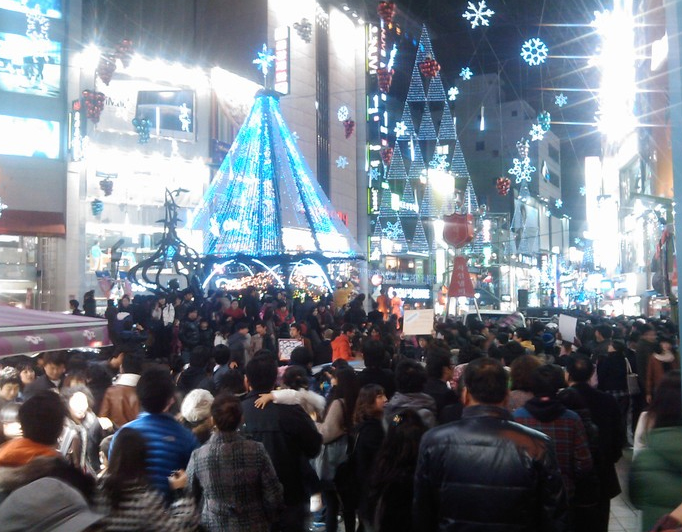 well-trodden in my brain that I’ve become almost completely anaesthetised.  To be honest, at this stage, I’d rather listen to my students singing Silent Night for the thousandth time than be regaled with stories of towns putting up decorations in October, or the infamously open secret of Coca-Cola’s proximity to the colour of Santa Claus’s attire.  In short, Christmas can’t win.  Yet such a sour-faced perspective appears to come with benefits in the Orient—namely the fact that it cements as an irrelevancy Korea’s absolute surrender to the capitalist trappings of the holiday season.

If the glitter and phosphorescence of Nampodong is garish to some, I quite enjoyed the non-committal nature of it.  For the first time, I am at liberty to do as I please over Christmas itself, bar the obligatory phone call home.  Speaking to a colleague about precisely this, I was informed that Christmas is essentially a ‘dating holiday’ in Korea, as almost all marked days on the Gregorian calendar seem to be.  If I was to take a wander through Busan on the 25th itself, she assured me, I would see nothing but couples.  Children, it appears, spend the day receiving gifts and reveling in the temporarily heightened generosity of their parents, whilst their adult counterparts get schmaltzy.  Although undoubtedly alien to an individual acclimatised to yearly doses of intergenerational squabbling, I’ve given this state of affairs quite a lot of thought recently, ultimately coming to the conclusion that the only true oddity is the fact that I perceive it to be strange at all.

If there’s one thing people agree on with regards to Christmas in the UK, it’s the unshakable imperative to spend it with one’s family.  Regardless of religion—within reason—children are taught from an early age that there is nothing worse than spending the holidays on your own.  Friends and lovers are for the rest of the year, so the indoctrination goes, but family reigns supreme in the bleak midwinter.  Listening to the plans of my co-workers this week, the state of affairs here couldn’t be more different.  Each had a meticulously arranged ‘dating day’ in store, with itineraries ranging from hiking, to a concert and the more traditional dinner for two.  My students also seem thoroughly single-minded about the whole thing, but this tends to stem from the purchase of a new video game or item of clothing, rather than the embrace of a loved one.  When asked, none of them had large family gatherings planned, merely a day off from the academy and the promise of fresh audio-visual entertainment.

To me, the air of excitement and anticipation is tangible, despite the paucity of decorations at school itself.  From what I’ve heard, this seems to be an issue dictated by the personal tastes of those wielding influence, so perhaps my principal resents the annual electronic ransom note received from her grandchildren.  Nevertheless, the spirit of festivity has now well and truly descended, with classes being spent either writing 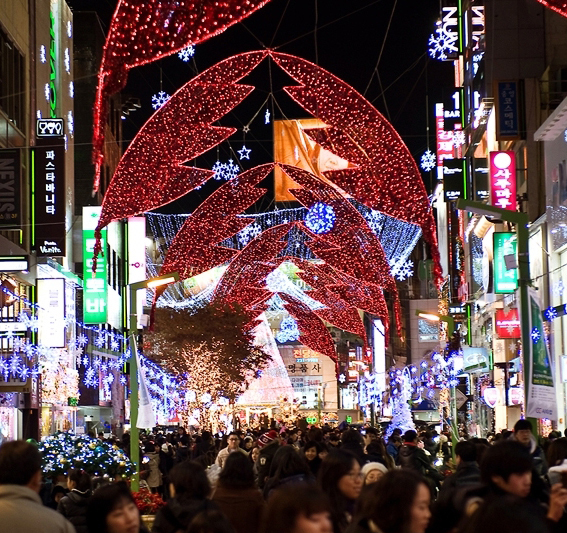 letters to Santa or learning Christmas carols —the latter of which can be particularly troublesome given their often archaic language.

If yuletide has been culturally reappropriated by a Korean society hungry to rid itself of disposable income at any given opportunity, I can see no downside to it.  Granted, I’m not a religious person, nor am I in possession of what I would deem an especially close-knit family, yet I’ve noticed a sense of choice associated with the holiday over here, one that too often seems submerged under the weight of obligation back home.  Only certain parts of the city have found themselves tied up with fairy-lights, which, alongside the huge variation in decorative efforts made by stores, is indicative of the prerogative of the people to make as much or as little of Christmas as they so choose.  I’m still on the fence in this regard, taking a small and distinctly juvenile sense of anti-authoritarian pride in my lack of effort.  Having said that, during the 15 minutes of precautionary siren song earlier this afternoon—conducted as part of a widespread civilian drill in the wake of the Yeongpyeong attacks—my lack of tolerance for the traditional yuletide ditties did subside somewhat.

<a href=”http://thethreewisemonkeys.com/wp-content/uploads/2010/12/Profile-Picture.jpg”><img title=”Profile Picture” src=”http://thethreewisemonkeys.com/wp-content/uploads/2010/12/Profile-Picture.jpg” alt=”” width=”116″ height=”160″ /></a>Sam Sheppard left London and arrived in Korea just over three months ago.  He works in Busan as an elementary school teacher and bores all that will listen with his blog <a href=”http://theilliterati.co.uk/”>The Illiterati</a>.