Like expats themselves, their publications in Korea come and go.

But some manage to set down firm roots, and as the Three Wise Monkeys (3WM) blogzine approaches its first birthday in January, The Korea Herald met with its founding editors for a podcast interview.

The site (http://thethreewisemonkeys.com) has just undergone a re-launch, which has changed the header and layout but none of its original principles, even as the weekly, non-profit publication finds its appeal extending out as far as Myanmar and Sri Lanka.

With its origins in DDD ― Difficult Dirty Dangerous ― magazine, started in Daejeon in 2002, 3WM refers to the Buddhist maxim “see no evil, hear no evil, speak no evil,” which warns against allowing evil into your mind. The idea of the project being that if you accept an imperfect world, life becomes richer and less stressful.

“It’s kind of a thing for the underdog,” said Scott Liam Soper. “It goes back to living a cross-cultural life, as an expat living in a foreign country. It’s like a Bob Dylan song except no one in the mainstream media is running any stories that are equal to a Bob Dylan lyric,” he explained.

Soper ― who uses the monkey byline “Mizaru” on the site ― and John M. Rodgers ― “Iwazaru” ― are always looking for the “Third Wise Monkey.” That is to say people interested in offering content that may not be published via the standard channels, from the “cosmic” to the “mundane.”

The site has featured some eye-catching, sometimes controversial topics in the past, including pieces on image obsession, the sex industry and abusive relationships, at times sparking a barrage of comments from readers, but Soper and Rodgers are not just out for the shock factor.

Having submitted articles themselves before to the conventional press, the pair were disappointed to find that the essence of what they wanted to say had been “eviscerated.”

Rodgers emphasized the need for independence: “That’s one of those core things of journalism that we’ve always wanted to have.” 3WM attempts to give expats an “inside view” of life in Korea, it is “trying to get at stuff as it is,” said Soper.

But 3WM is a cross-cultural, collective endeavor, not about “us and them.” “We reach out all the time, that’s how a project like this gets built,” said Soper.

Although they will consider all ideas for submissions, they have a clear ethical line that ensures they do not get anyone in trouble, or “torch” anything.

Whilst Soper and Rodgers do not agree on everything relating to the project ― Rodgers the more cautious of the two, Soper more keen to get a reaction ― they work well together. Soper’s artistic vision and “ninja marketing” approach toward publicity are complemented well by Rodgers’ calmer stance and meticulous attention to detail.

Although plans to produce the publication as a print magazine have been floated, the pair are mostly focused on not becoming complacent, reaching more people online and getting better at what they do.

“To get something right, to do something well,” said Soper, “that’s almost a means to its end, its own punctuation.”

The new header, where the 3WM logo is permanently on the left and the artwork can be seen in its entirety when scrolled over, represents their “feet on the ground” attitude, said Scott.

They both agree that the site has not changed much, but, said Soper, “its grown up.” 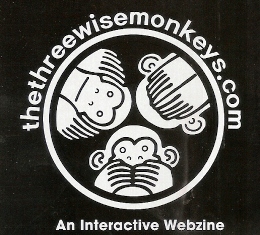 “It was a bit traumatic when we first started,” said John, “now it’s a bit more natural.” With the hundreds of submissions already received and ever-increasing readership, it would seem others are inclined to agree.

Both editors are keen to keep the contributions flowing ― from poetry and fiction to reportage, travel and reviews ― but say they could particularly use someone adept with social networking media.

They want to do more bilingual work in the future, particularly regarding coverage of the Gay Lesbian Bisexual Transgender (GLBT) scene in Korea. Also, they plan to visit the DMZ with North Korea campaigners who distribute leaflets there. They also hope to publish more student writing.

They plan to continue their role as a voice for people on the “fringes” who they believe have the most interesting things to say.

“It’s the pursuit of truth and beauty,” summarized Soper.

Go to the Korea Herald Story