HomeFiction/Poetry3WM’s Poetic Primate of the Month

Koreans know what’s best for you,

So when you’re ill know what to do?

To go and eat the meats that’s tough.

Can cure all colds and summer heat

And really it is clear to see,

Certainly worth every dollar,

Gets you hot under the collar.

It does not have to be a sin.

Your tummy’s growling out and calling,

So bring your husband, kids or wife,

And give them a new leash on life.

Hence crouch and sit down on the floor,

Pick up your chopsticks with your paw,

As fraid I truly recommended,

That you chow down on man’s best friend,

Cause it’s the best meat by a mile,

Not your average Russian

Those girls out there who have blonde hair,

Will understand the cross I bear.

The question always thrown at me,

A Russian girl is who you be?

As three times I’ve been arrested.

It not my fault, nor my intention,

I attract the wrong attention,

Seem to fail at integration,

Tend to piss off immigration.

One day suffering from constipation,

I walked outside the pharmacy,

Surrounding me by every side,

Held laxatives, so not much pride.

Then one of them barks, where’s ID?

Laxatives was all I had on me.

Concerned for my legitimation,

They asked me next how long my stay.

So next came my incarceration.

I see the bus, unmarked and black,

They push towards I start to back.

I cry out that I’m innocent.

Not an illegal immigrant!’

They force me on the prison bus,

That’s when I start to make a fuss.

The windows they were barred and black,

Three immigrants sat at the back,

Stared at me with sorrowed eyes,

Several times I tried to rise,

The officer pushed me back down,

And sternly asked me with a frown,

I really thought that this would be,

The last time anyone saw me.

Everyone would hear reported,

My whereabouts would be unknown,

Then I recall I had a phone.

I whipped it out and phoned my school,

No one answered so not cool,

Then finally, about to go,

So after quarter of an hour,

A call to the British embassy

Eventually they release me!

Not at all apologetic,

No kind words, not sympathetic.

I ran straight back to my director,

Expecting quite a lengthy lecture.

My ordeal I thought vicarious,

But he found it all hilarious.

He wiped a tear out of his eye,

What he said next I could have swore,

“They thought you were a Russian whore!”

I really was quite formally dressed.

Apparently it would appear,

The view that’s held within Korea,

Teachers and whores they look the same,

Resemble those who’re on the game,

So rather than risk playing roulette,

Of how to make waygook tit soup.

The locals call the Jimjilbang!

Jimjilbangs just so you know,

Lots of showers with little stools.

But there is one important rule,

Before you go into the pool.

To not comply would seem most rude

You simply must be in the nude!

So drop my pants down to the floor,

And opening the locker door.

Stuff everything I wear inside

perhaps a little of my pride.

Now maybe cause I’m in Korea

I feel obliged to hide my rear.

As Korean girls are rather thin,

Gorging on choccie seems a sin.

Then understand my next surprise

When strutting round before my eyes

I venture in to become wetter

When walking first towards the sauna

My first encounter turns the corner.

An ajumma, fat, round and proud,

Came screaming at me rather loud.

In words I could not understand,

And pointing at me with her hand,

Directly straight at my vagina,

Began to wish I had chose China.

Only when discussing after,

With my friends in so much laughter.

That far as lower grooming goes,

The girl’s who shave are mainly Hoe’s!

But never one to be defeated

In one hot tub I became seated

I really did begin to chill.

Though my retreat was not the last,

Unfortunately I had been clocked

The gaze of several ajummas locked.

Blonde nude Way-Gook is rather rare,

So why not go and have a stare?

With pairs of tits down to the knees

Come climbing in from every side

Now my Korean’s rather lame,

I speak so little to my shame.

But I lack the skills to have a natter

So clearly with nowhere to go,

Though after an awkward exchange

I start to feel a bit less strange.

The ancient dears they took to me

We sat and chat and drank some tea.

So basically here is the deal,

To make this lovely tit based meal

Take one waygook and add to pot

Then ajummas, you need a lot.

Add some bubbles and some tea

and that’s the tit soup recipe! 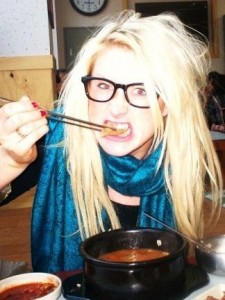 You Need to Get off of Facebook (a film)