Editor’s Note: This is the final installment in a three-part memoir where the writer reflects on the collection of events that led up to one major wake-up call here in Korea. Read Part 1 and Part 2.

Having no recollection of any actions that might have necessitated my arrest and subsequent handcuffing I proclaim my innocence to all within ear shot. I demand to be

released and when this is not done set about insulting every member of staff foolish enough to be on duty. One guy has a moustache (a rarity for a Korean) and he gets a tongue lashing; another was carrying a few extra pounds around the midriff; yet another I abuse because he has the audacity to tell me to be quiet. And a tear into a token female member of staff for turning her nose up at me. The list goes on and on; and I kept it up for ages; it’s the kind of performance drunks give for free the world over and it did not win me any friends or concessions. No one came to my aid, no one came to unlock my handcuffs and tell me they’d made a mistake. I become so enraged and was still so drunk that I tried to drag the sofa I was handcuffed to out of the front door; through which beautifully bright sunlight taunted me. I tried this so many times that for a month and a half afterwards parts of my hands and wrists were still scarily numb.

Later a plain clothes detective with some English tells me I am accused of assaulting a taxi driver and the police while resisting arrest. I say in a loud and clear voice that they have the wrong man; innocent; not me: impossible: have absolutely no recollection. He starts to question me about the previous night. He asks for a phone number of someone who can vouch for me. The only number I can remember is my girlfriend’s and I recite it for him. My girlfriend, may god always keep her well, didn’t drop me the moment the guy said ‘police’ and ‘arrest’. He allowed me to dial the number and speak to her for about 60 seconds. She gave him my boss, Madame Gwon’s number; and it was she and one of the English teachers who came down to Pohang and claimed me like a piece of lost luggage. At some point the detective unlocked my handcuffs and I was allowed to join him for a cigarette on the stairs. He told me in his syntax-challenged English that when the taxi driver stopped to pick me up it was already occupied. Apparently by a couple; the guy was a westerner and the woman, Korean. It appeared to the taxi driver that we knew each other. I’ll never know for sure the identity of the couple because from when I said good bye to my mate Duncan, it is all blank; everything else is conjecture.

Why the argument with the taxi driver? It couldn’t have been about money because I had the pockets of my combats stuffed with hundreds of thousands of won in back pay. I have a theory though; let me run it past you. A couple I half know are speeding home in a taxi when they spy me all messed up and angry in the road trying to get myself killed. Pity coursing through their veins they have the taxi driver stop and get me into the front passenger seat. A little while later the couple get out at their destination and I continue on to Buk-bu beach. By the time the taxi pulls up I am sleeping soundly beside the taxi driver who clicks the metre and wonders what the hell he has done to deserve yet another sleeping, foreigner drunk in cab. He tries to wake me with a shake or three but to no avail. He curses the day he ever decided to get behind the wheel of a taxi. Losing his patience and common sense he thinks if he can just worm the fare out of the pockets of this drunken idiot’s trousers and deposit him onto the pavement, then he can go about his business earning a God damn living: which is hard enough at the best of times. The only thing is the sleeping, drunken foreigner chooses that very moment to wake up; with the taxi driver’s hand in his pockets. What the fuck are you doing? And that’s when the fists start flying: maybe. 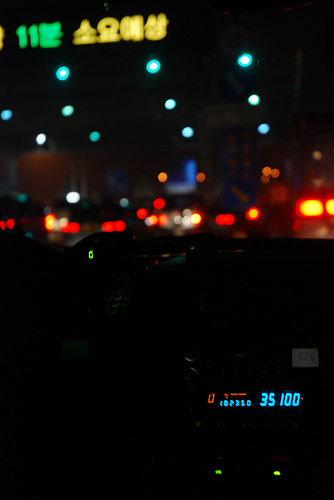 Later I was transferred to a much larger police station. I was shown into a large open plan office with only a third of the desks occupied. Not a uniformed officer in sight. The plain clothes detectives in the office were thick set, mean looking men with not an ounce of dress sense but plenty of pent up aggression. They cursed me en masse upon my arrival and one even spat in my direction. When I started demanding to be released they told me to be quiet and threatened me with a kicking if I wasn’t.  Murderous looks were sent across the office at me from each detective at his desk in turn. After being left to fester seemingly forgotten in a corner for what felt like hours. They finally made noises about wanting to take my statement but couldn’t until the translator (a civilian volunteer) had arrived.  The detective from the first police station asked a question in Korean, the translator wrestled with it for a few seconds then proceeded to ask me a question in English; he would then re-translate my answer into Korean; this as you can imagine went on for some time. After I’d finished giving my statement the detective and the translator went off to one side to huddle and confer. The translator came back, sat down and told me that the detective wanted me to understand in no uncertain terms that if I didn’t come clean and confess to my crimes, the police would throw the book at me; meaning possibly prison. I explained that I couldn’t admit guilt to something I had absolutely no recollection of doing: simple as that. He passed this on to the detective and he looked less than pleased but what could I do? The detective left the office with my statement. He came back and whispered something to the translator; the translator leaned over and told me they were bringing the taxi driver in to take his statement.

As soon as I saw the taxi driver and how he reacted when he saw me, I knew that what they’d been saying was true. I told the translator. I metaphorically flung up my hands and said it’s a fair cop. You might think me an idiot capable of the grossest acts of naivety to accept responsibility and punishment for something I had absolutely no memory of doing. But, I was the one who woke up handcuffed in an unknown police station in a foreign country; I was the one being threatened with a stay in prison and all that that entails (loss of liberty, termination of employment and a short cut to being deported: all of which didn’t sound good to me). And finally I was there when they brought the taxi driver in. There could’ve been some vast conspiracy to hood wink a hung-over foreigner with replica handcuffs, mock arrests made by counterfeit coppers and method acting taxi drivers. But why would they go to so much trouble? Like I said I was there when they brought the taxi driver in and he looked scared; shit scared. He really did seem to recognise me and seemed seriously ill at ease. He shrank back when he saw me sitting beside the translator, and that kind of decided it for me: that and the strong desire not to fuck up my life by going to prison.

After admitting my guilt only two things needed to be done before I could be set free and escape. First I had to pay damages to the taxi driver and the big, hard professional policemen that I physically and/or psychologically damaged while resisting arrest. The amount that was summarily decided upon was five hundred thousand won to each of the victims (remember this is almost eight years ago now. I’m sure the cost of paying off a taxi driver has gone up by now) I could pay the police later but the taxi driver had to be mollified immediately. The other thing, was that someone responsible, property or business owning and Korean had to come and vouch for my future good conduct and escort me back to Daejeon. My boss,( the self-styled) Madame Gwon came to the rescue on both counts just like the cavalry in an old western; only she didn’t enter town on a horse (the inter-city bus being much more convenient), pack a pistol or eat a lot of beans. The journey back to Daejeon was a painfully drawn out, brutally hung-over nightmare. The humiliation, of waking in a foreign country handcuffed to a sofa in a neighbourhood police station with no recollection of why I was there. Having to be bailed out by my dumpy, fur-coat-wearing boss. Having to sit on the bus behind my boss and the Korean teacher dissecting the whole sorry episode: Oh! The shame.

Usually on Sunday mornings I’d play football with a bunch of Korean university students (everyone a clean living Christian boy). When we met up to play the weekend following my arrest they were curious how I got all the cuts and bruises on my face and hands. I was so ashamed I made up a story in which ironically I was hit by a taxi whilst riding my bike. So what is the moral of my story; this confession and a half? A word to the wise: be careful out there upon your merry way about town. When you’re well dressed, loaded and twinkle toed of a weekend amongst our local brethren go lightly and with a clear heart. And more importantly know your limits and where your demons will take you and why.