On February 7th, I graduated from a foreign language high school in a rather mundane and boring 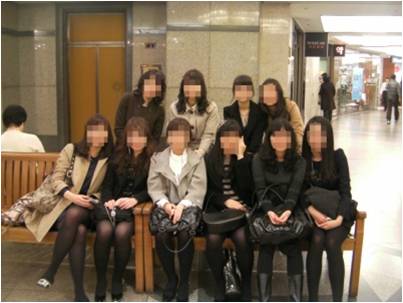 ceremony, the only highlight being when the boy who was chosen to give a speech to the graduating class—he was a student from the program in our school that prepares students to enter universities abroad—broke away from his scripted Korean address, which was rolling on a giant screen at the front of the auditorium,  into a humorous rant in English that criticized the school and had teachers scowling.

To celebrate our commencement and get together for the last time, the Chinese department had a gathering at “Convention Diamant,” a wedding hall near COEX. Unlike the graduation ceremonies of ordinary high schools, ours is a little bit special. Firstly, we don’t wear the school uniform. Male students generally wear suits, and female students dress up, mostly in decent skirts and coats, some more daring than others. Students get their hair done and put on makeup. Many of my (female) friends said they had to get up at 5 in the morning in order to go to salons to get their hair and makeup done. I didn’t.

This is something I dislike about our school’s graduation ceremony. It implants the idea that the school and the members of the school are special and privileged. A graduation is a steppingstone for students to move on to the next stage of life. It is an occasion for one to look back upon one’s school days, reminisce about the memories and take something from them. It is not the end of the world, and such a lavish celebration is unnecessary. In my case, I got up at 6 a.m. for my daily jogging, and went to school without putting on any makeup or hairspray. I didn’t want myself to be someone else for that one day. Graduating is of course a special occasion, but I still don’t understand why they had to make such a fuss about it.

Our school being a foreign language high school, consists of five departments: German, French, Spanish, Japanese, and Chinese (mine). In ordinary high schools, students of a class are scattered all over when they progress into a new grade. However, in our school, we rotate in a department. For example, the Chinese department consists of three classes (with an average of 35 per class), so every year the students of the department are dispersed into only three classes. The Japanese and the German departments both have only one class respectively, so the students spend three

years together in the same class. Through spending one’s high school years in such a bounded community, the student of a department comes to establish an intimate relationship with one’s friends in the same department, and a strong affection for one’s department. Apart from the class system, the department system works as an invisible boundary and a bond which keeps the members close together.

Therefore, to us, graduating high school didn’t simply mean leaving the school; it meant we were leaving the special fellowship we had built up for three years. So the gathering of each department takes on great significance to the members. Getting together after the graduation ceremony has long been a tradition of our school. Students gather money to rent a place to hold the party. (Last year the Spanish department students rented a hall at the InterContinental Hotel.) The event is a meaningful occasion for the students. It is a chance for an entire department to get together for the last time and to live a moment that will never come again.  High school is gone.

However, I have to admit that the way of doing it isn’t really acceptable for everyone. Some people think it is a waste of money to rent a hotel hall for such a “trivial” event. I agree that it was a little too opulent, and I almost detest the idea of some of my friends that we are very special, and we deserve such a luxurious party so that we can differentiate ourselves from “ordinary” high school students. We are no more than ordinary high school students, and it is wrong to assume we have some kind of a prerogative.

Actually, this kind of attitude has been a social issue throughout the year, and our school has gone through a series of hardships from malicious rumors and the press. As a student of the school, I felt sorry that people outside of our school judged us only by our outer appearances.  On the other hand, I also felt that we deserved such slanders since they were at least partly true. Some of us really did have the false notion that we are special—different from ordinary students. Their distorted perspectives and subsequent inappropriate rushes to judgment led our whole school to be generalized as such, and eventually be subject to harsh criticism. (Due to such social attention and critical views upon us, around October, we were even deprived of the delivered fried chicken we had used to eat weekly during our nighttime self-studying that lasted from 6 to 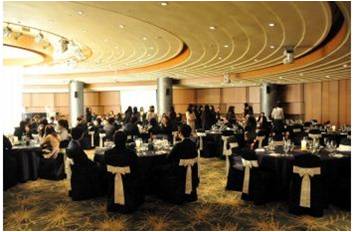 nearly 11 p.m., five nights a week.) Hence, holding a graduation party at a lavish hotel was sure to stir up criticism again. So this year the school ordered the students not to rent expensive hotels for the gatherings after the ceremony.

Our department consists of nearly 120 students, so it was difficult to find a place capable of accommodating all of us other than a hotel hall. What else would do? A wedding hall. The picture on the right is the place where we gathered in the evening of the graduation day. Each of us was asked (informed) to pay a sum of 60,000 won in order to take part in the party. What was upsetting was that nobody was told anything about the place and the cost before we got the message which contained the price (60,000 won) and the account number where to send the money. In my opinion, the selection of the party place should have been open for discussion, with everyone’s vote counted.  But it was just decided by a small number of people (mostly the mothers of the class leaders), and everyone else had no choice but to pay the required sum in order to earn the ticket to the extravagant graduation party. The price was a little too high for normal high school graduates, and I felt, again, it reflected the “privileged” perspective.

Anyway, the party was held. The hall was neither too luxurious nor too plain, and the dinner buffet we were served was, well, not bad (Actually it was pretty bad, thinking of the sum we paid). The best part of the place was that it had a round stage in the middle. So we had a special corner for some of our friends to show off their talents. Volunteers (and some who were pulled up onto stage) either sang or danced. They were all impressive, and some of them surprised us since they had kept their talents confidential throughout the past three years. It was fun to watch them, but sad at the same time because it was obvious we wouldn’t be able to see them as often as before. Thus, throughout the gathering, we were all very busy taking as many photos together as we could. We wanted to store and keep forever the precious memories of the last day of high school.

To recall the party from the bright side (regardless of the price and its dark aspects), it was a meaningful occasion for us to get together and enjoy ourselves. Actually we had never had a chance for the whole 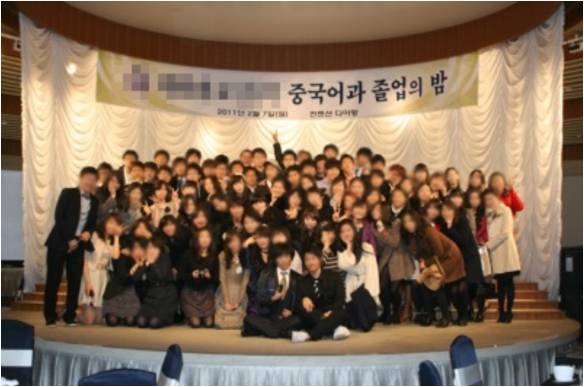 department to gather altogether in one place like that. So it gave us the time to cherish our “Chinese” spirit once again and maybe for the last time.  We all were still high school students, with nothing more to worry about, and that allowed us to rejoice together with true happiness and a purely congratulatory mindset. Even if we all do get a chance to get together like that later in our lives, we would all be grownups with stacks of things to do and worry about, with biases and prejudices unintentionally gained from life, and it would never feel the same as that very night. So eventually, if we leave the cost and the lavishness out of consideration, the party was a success as it let us fully share the common unity and affinity we had developed for the three years we spent together. It was a good enough opportunity to make our graduation memorable.

After all had ended, we finally all stood and sang, holding hands. It was touching. Some cried. I cried. The thought that I would miss all of my friends so much, that I wouldn’t be able to see them so often as before—maybe some of them forever—and the sadness from the thought was overwhelming. I burst into tears and couldn’t stop crying until the party was all over and I said goodbye to everyone. It was a pity I had to take pictures with my eyes all red, but the Chinese department and the three years I spent as a part of it was something way too much to leave behind.

The gathering was a meaningful occasion: it was a steppingstone for us students to grownups. It was a moment to summarize the three years we spent as members of the Chinese department and settle our minds for our commencement. Thanks to the graduation party we could cherish the high school memories in our hearts and ready ourselves to move on out to society to make a new start. Where it was held, home much it cost and all the other details really didn’t matter.

Stella Jang just began her freshman year at Seoul National University where she is a student in the College of Humanities.

Kwangju and Broke Again: Day by Day of an Expat Travel Writer