I. The ROK’s Numerous Achilles’ Heels

After having read Sung-yoon Lee’s stridently hawkish op-ed on The Los Angeles Times on November 30th, 2010 , and now, after having listened to the ROK National Security Adviser, Chung Yung-woo’s recent interview with Margaret Warner of PBS News Newshour, I am convinced that the ROK hawks have it all wrong. When they blather on about Pyongyang’s “existential crisis” and its “unique points of vulnerability,” I get the impression that they are either in denial, or are ignorant of their own country’s numerous vulnerable spots which may serve as inviting targets for the DPRK. In short, they are definitely in need of a reality check.

Okay, so let me slowly walk you through the ROK’s Achilles’ heels. I don’t like to rehash old ideas, but this time, I feel I must. They warrant attention in that they provide clues as to how the DPRK may lash out against its southern brethren. They also matter in that they reveal the ROK’s scheme to unite the divided minjok to be a quixotic pipe dream.

First, the ROK remains militarily vulnerable. According to a 2010 study conducted by the ROK National Assembly, it was revealed that the ROK Armed Forces had sufficient munitions to fight for one week only. Further, as I once suggested to one of my editors in our e-mail correspondence, the sinking of the Ch’ŏnan, and the bombardment on Yŏnp’yŏng, could be interpreted as attempts by the DPRK to “probe the ROK’s Achilles’ heels to derail the ROK military leadership.” In both cases, the ROK generals and admirals have proven to be complacent and incorrigibly inept. More shocking still, in July, 2010, an ROK Army major general was charged with espionage after he was caught transmitting top secret war plans and American field manuals to his masters in the DPRK. Despite desperate attempts by the new Defense Minister, General Kim Kwan-jin, to breathe new life into the demoralized ROK military, evidence suggests that short of a complete overhaul, it may or may not regain much-needed fighting capability and spirit to stand its ground against its main adversary, or chujŏk. Thus, according to one former superintendent of Korea Military Academy, “Now is the time to bring out the scalpel and excise everything!” Just what the excision entails is a question that the ROK military leadership should be asking itself before it finds its military completely “ARVN-ized.” More importantly, the surgery will leave lasting pain and scars.

Second, globalization and the ROK’s gargantuan economy render the democratic republic all the more fragile. I don’t mean that the South Korean economy will collapse, or that its foundations are shaky. After all, recent events have proven that South Korea’s economic foundations remain solid, and that the ROK is learning to be a responsible industrialized democratic country. Nonetheless, frequent trade with both state actors and non-state actors alike renders the sixty year-old republic susceptible to new ideas which may prove to be anathema to everything it stands for. Like heterogeneity, a cosmopolitan and multicultural society, and reconciliation with its northern brethren–its purported main adversary, or chujŏk. Indeed, the more the South Korean citizens interact with external actors, the more cognizant they become of the fact that they 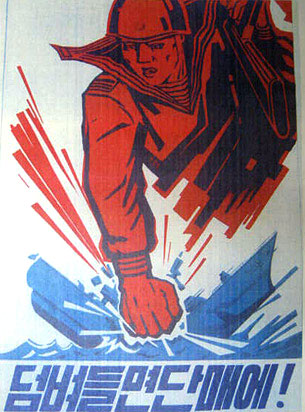 must accommodate foreign ideas, products, and cultures in order to thrive. And the more painfully aware they become of this fact, the quicker they will lose their identity.

Which leads to my third point. The more tolerant they become of things foreign, the more susceptible to North Korean propaganda the ROK citizens will become. Granted, it is true that after the two tragic provocations by the DPRK, the zeitgeist of the ROK is such that the South Korean citizens will no longer tolerate as its leader a weakling who merely talks the talk without walking the walk. Nonetheless, one must be careful not to ignore counter-evidence. According to an article entitled, “Seoul eyes crackdown on North Korean Internet propaganda,” by IDG Service, despite beleaguered attempts by the South Korean police and the Korean National Intelligence Service to deny access to the social networking Web sites hosted by the DPRK, in recent months, its Twitter account, known as Uriminzokkiri, has had “10,545 followers including some that appear to be in South Korea,” and is going viral still. Indeed, it is worth noting that since the inauguration of Lee Myung-bak as South Korea’s president, both North Korean cyber soldiers and South Korean citizens sympathetic to the DPRK have waged a cat-and-mouse cyber guerrilla war to spread the twisted Juche gospel online through various Internet social group sites. I, for one, have recently found at least five new pro-DPRK Web sites. Alas, the ROK government seems to be losing this very important war.

Fourth, given the democratic nature of its society, for all their tough talk against the DPRK in recent months, the fact is that both the ROK administration and its citizens remain wary of a potential war. Who is to blame them.  If there is one thing I learned during my time spent in South Korea, it is that the ROK citizens are fiercely proud people. They are proud of what they have accomplished and remain optimistic of a brighter future. This combination of pride and optimism is deeply-rooted in the “Korean Dream” and the attendant stability it brings. For this reason, no sane policy-maker or citizen wants to risk a war which may prove to be unwinnable, because the risk of violence necessarily entails giving up that which they cherish most. That is why a South Korean president, be he peace-loving Kim Dae-Jung, or warmongering Lee Myung-bak, has a limited course of action available to him because he does not want to lead his republic down the path of war. Indeed, the more circumscribed the ROK president’s options, the less likely he will retaliate, or develop proactive strategies against, the DPRK.

Thus far, I have attempted to illumine the ROK’s numerous Achilles’ heels which render it susceptible to the DPRK attacks. In this entry, I have tried to prove that, if anything, the ROK remains exposed to various forms of aggressions. In my subsequent entries, I shall attempt to explore various ways in which the DPRK may provoke the ROK in the near future. It is my hope that my scrutiny of such potential scenarios will enable the ROK to develop a proactive strategy, as opposed to mere damage controls.

J. Lee was a former high school teacher in Pusan where he taught Korean returnee students for five and a half years. He is currently back in Canada, preparing to pursue his master’s degree in International Relations.