HomeTravelKwangju and Broke Again: Day by Day of an Expat Travel Writer (Pt. 3)

Editors’ Note: The is the third and final installment in a series that explores the life of a travel writer as he earns his keep exploring the southern city of Gwangju (yes, the spelling changed). Read Part 1 and Part 2.

Korea’s green tea, like its ginseng, is excellent. I could have written about Art Street without visiting again, but the taxi dropped me off in the vicinity and I felt like a cup of tea. Later, I’d make sure my facts were correct about Bosung Plantation’s production. I was not happy with these two paragraphs and spent hours once I got back to Seoul trying to come up with something stronger. A basic rule of travel writing is that you try to make people feel, smell, taste, hear, and touch whatever you’re writing about. Even after multiple revisions these paragraphs seemed flat. Writing in second person is tricky. It’s hard not to write ‘you’ every other sentence because when you do use you too much, you won’t get published nor will you get paid. Travel stories

with specific destinations create another problem. Many writers end up with a point of view somewhere between third and second person plus a narrative that resembles a list more than a travel story. The following italicized paragraphs are an excellent example of this. Given permission to write in first person and a slight margin of negativity in my writing, Kwangju could offer up an enjoyable travel story, but there is no chance of reselling this fluff to large American newspapers or other markets. Your average Westerner probably wouldn’t put South Korea on their travel list, let alone its fifth largest city.

No City of Art is complete without an Art Street. This three-block alley in the heart of Gwangju has twenty galleries, three art museums, and several art institutes. Painted fans, handmade jewelry, leather goods, traditional masks, rice paper, pottery, and watercolor paintings are all good buys. Of special interest are Korean calligraphy brushes made from lamb and weasel hair. These brushes, ranging from pencil to broom-sized, are recognized as the best quality in Korea, if not the world.

For some reason art and tea go together so try out one of the many tea shops around Art Street. The Bosung Green Tea Plantation, located near Gwangju, produces roughly 30 percent of Korea’s green tea from 588 million plants. Green tea has a distinct bitter flavor and is good for cholesterol, digestion and healthy skin. The tea ceremony is a simple four-step process that can be learned in a few minutes.

The cheapest places to drink during spring and summer are at plastic tables set up outside convenience stores. I meet Brian and Tim at one that is positioned at the corner of a major intersection. The car exhaust gets to you, but the people watching is great. High School students mill around, drivers honk their horns for no apparent reason, businessmen stagger by red-faced. Korean children, arguably the cutest around; gawk, look away, and then gawk again before covering their mouths and giggling. When you want another beer, you just walk inside and grab one. It’s one of my favorite things about the Hermit Kingdom. We had the standard conversations about wives and girlfriends, discussed the hypocrisy in the Korean education system, the impossibility or possibility of a second Korea War, and generally it was affirmed that things were okay. We didn’t understand Koreans and they didn’t understand us, but the money was adequate; lifestyle frustrating, but never boring, and Korea was a great base to explore the rest of Asia. Southeast Asian beaches were a five-hour flight away. Quick trips to China or Japan could be done over a long weekend.

After a few hours, our table was full of empties. We were deciding if we should go to a bar or just call it a night as an old man walked toward us straining to pull his cart of recyclables. This is a standard job for the poor, family-less, or degenerate in South Korea—a country with few social programs for the disenfranchised and fewer private programs to help those who don’t have familial support. (My personal opinion of cultures where the family is the sole safety net is that they quickly lead to overly Darwinistic and selfish behavior. Family becomes so valuable that people will do anything to protect it and its reputation. Koreans don’t tell ‘momma jokes.’)

This dateless creature did not appear drunk or mentally imbalanced. My guess is that he was just poor, old, and alone: one of the purportedly revered ancients that somehow fell through the cracks. His cart was a big wooden box rolled on bicycle tires. Cardboard, copper spool, tin and aluminum cans, plastic bottles, newspapers: anything of recyclable value was stacked, crammed, and dangling from his cart. His eyes lit up when he saw all the empty bottles on our table. At about three cents a bottle, he could at least feast on instant noodles tonight from the income created by our excess. He pointed toward our bottles, smiling and nodding politely. We told him he could have them. He grabbed a few and slowly put them in this cart. There was a lurch to his walk as if he had a hip problem. When he returned to our table the second time, the store owner shot out of his shop yelling obscenities at the old man. The store owner had cases of empties piled beside his store. The cost of the bottle is figured into the net cost of every beer a customer buys in South Korea so technically the bottles were ours. We could have turned them back into the store owner for three cents a piece although we never did. Whenever we had a party, we’d leave the empties outside our apartments. They’d always be gone the next day.

The store owner began putting on a bigger show, stomping about, pointing at his bottle collection and then into the vagrant’s face. He was slightly built and had a squeaky, high-pitched voice. I thought of a spoiled kid having a tantrum. It would have been comical if the old man didn’t have his head bowed and wasn’t pathetically asking for forgiveness. Koreans routinely boast about being the most Confucian culture in the world and that respect for family and the elderly is a distinct trait. What if you’re old, poor, and not part of the family? I was seeing the answer to a question I’d never pondered.

Locals walking past didn’t even glance at the conflict. I figured the whole thing would blow over quickly and the shop owner would get our bottles back, which he did, but he continued to castigate the old timer–30 cents worth of a hobo’s recyclables. The old man kept on bowing and asking forgiveness. The owner didn’t seem to mind that his three customers had stopped talking, laughing, and drinking, that we sat with our arms crossed, that we were shocked and embarrassed.

He grabbed the cart, pushed it toward his store, and retrieved a chain from behind a table. My jaw dropped when he began chaining the cart to a series of tables so the man couldn’t leave. He was going to have the man arrested. The old man hobbled over to the shop owner and his apologies took on a begging tone. Brian could not take anymore and stood up yelling at the store owner before he could get a padlock on the chain. Brian stepped between the two men and yelled “Why, why? He is a grandfather. He is an honorable old man,” Brian repeated this in broken Korean. His voice started to crackle, being at the volatile point of anger and frustration when your eyes begin to tear. The store owner smiled in a witless manner and giggled nervously. Brian weighs about 220, has a black belt in Tae Kwon Do, and a bucket-sized noggin. I would have been scared witless if Brian was in front of me yelling. The store owner started to chain the cart again when Brian screamed “No!” and followed that up with an apoplectic tirade that was a frightening mix of Korean, English, logic, and sailor mouth. I can’t remember his exact words, but everything was centered on a solid theme of, “If you chain that cart, I’m kicking your ass.” He got so close to the shop owner that I could see spittle land on his face. After a few more nervous chuckles, the shop owner began unchaining the cart. The old man bowed deeply and thanked the owner several times before he ran away as fast as his old legs would take him and his heavy cart. When he was safely several blocks away, we kicked over the plastic chairs like macho punks and glared at the store owner.

I woke up late the next morning in a strange hotel room, having one of those frightening moments when you can’t recall where you are. I remembered, but the feeling didn’t go away. I cleaned up, got my pack ready, and then walked downtown. Younger Koreans were packed into a Burger King. I thought about buying a calligraphy brush and didn’t. A few people bumped into me without apology. The previous night’s memories made taking positive notes impossible. I decided to go back to Seoul, suffer more drinks, and hug my girlfriend.

On the four-hour bus ride back to Seoul, I thought about Paul saying that I could write 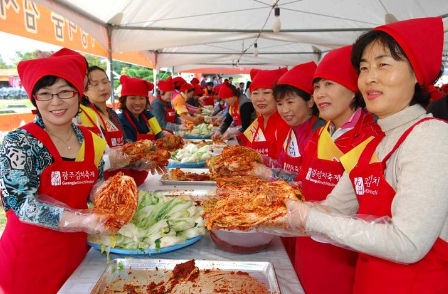 about dishes, but not about food. I’d been to the Kwangju’s Kimchi festival–a silly celebration of pickled cabbage–a few years ago. As long as I kept things upbeat, I was sure the Korean editor would relent and approve some food-related writing.

The agricultural surplus in Jeolla province combined with its role as the distribution center for seafood harvested in the Yellow Sea makes Gwangju a culinary paradise. No connoisseur of Asian food should miss an opportunity to visit. Residents of Gwangju are extremely proud of their appetizing heritage. Even at a shik dang, the Korean equivalent of a diner or truck stop, the cook will ask if the food is satisfactory.

It is fitting that the Kimchi Festival, a celebration of Korea’s favorite dish, is held here. This is a time when Gwangju bristles with pride. Thousands of varieties of pickled vegetable dishes can be sampled during the festival at hundreds of different food stalls. Throughout the four-day event held in late October, there are exhibitions of Korean traditional music and dance; folk shows, singing contests, and the famous foreigner kimchi-making contest. The Gwangju Kimchi Festival is certainly one of the most exciting times to visit this dynamic city, but year round, you will find plenty to do in The City of Art…and food.

When I got back to Seoul, I wrote up a rough draft, revised it, tightened up the prose, and got it to the required word length. Working three hours a night, this took about a week. Paul put the story on the schedule. It was due to run in two months. Freelancers are usually paid after a story has been published. $750 dollars would pay for my living expenses, excluding rent, in Seoul for about a month.

18 months later, sitting on a beach in Mexico, the story is in print. Due to a mix up with the photos for the story, Paul moving to another publishing house, and Korean linguists deciding to change Romanization again–“Kwangju” is now spelled “Gwangju”—money is deposited. $750 richer I’ve been exploring fiction lately.