On March 7, 2011, it transpired that the police in South Korea were looking at the possibility of reopening the rape-abuse case of Jang, Ja-yeon. On March 6, SBS TV ‘News at 8’ had run a special, questioning the thoroughness of the initial investigation.

SBS also appeared to be in possession of new letters, though much like many other aspects of the case, this was never solidly established.

On March 8, police obtained the rights to re-open the case.

As is often the way with celebrity news, the facts are hard to come by and as with the former installment of the Jang case, the reports are, or were (the case has now been closed) predictably conflicting.

The source of the new found letters, believed to be a ‘Jun’, or ‘Jeon’, male, 31 and ‘childhood friend’ of Jang, is somewhat ironically serving jail time for rape. According to reported facts cited as the truth across the South Korean press, 23 letters, made up of ‘hundreds’ of pages, were found in the inmate’s cell at Gwangju Prison, or Busan Prison, depending on who one talks to.

The letters were supposedly sent between 2005 and 2009, penned by hand from Jang and discovered by the police, or SBS, or someone working in the prison, again depending on who was speaking and at what point.

The content of the letters, based around the actress being forced to have sex with “thirty one prominent figures… over one hundred times” have not been independently verified by sources outside of SBS, who initially claimed to be sitting on their copies but have since suggested that they did not in fact possess any copies. If SBS did ever have them, it is not abundantly clear how they came to be in the possession of the second round of letters.

It was then additionally reported that these 31 men were earlier under investigation, with nine prosecuted or all acquitted, again depending on whom one talks to and at what point in the circus that they were speaking.

With these new found letters recently abound, the questions ‘At what point in the previous investigation did the other twenty one suspects become suspects?’ and ‘How were they previously linked to the case, without these new letters?’ could have both been posed.

The earliest reports suggested that the letters had been verified by a ‘handwriting specialist’. This was then thrown aside three days later when another forensic team proposed the theory that the letters being disseminated by SBS and / or in possession of the police,  showed signs of both tampering and doctoring.

It is worth mentioning that of 2,439 letters delivered to Gwangju Prison between November 2003 and March 2010, The National Institute of Scientific Investigation states that none were sent by anyone signing off as Jang Ja Yeon.

In addition, the police have issued a set amount of information to go on. Parts of some envelopes had been removed with a sharp instrument. According to ‘an investigator’, “He (the friend) seemed to have removed the parts in order to conceal where the letters came from”. Lastly, the inmate’s cell was partially decorated with cuttings of news reports relating to the case and a forensics team have suggested that the words “I will never leave your death worthless,” had been written across a piece stuck to the wall, by the inmate.

The least conflicting public-sector reports, suggested that it appeared as though out of 23 letters and five envelopes, seven areas raised suspicions of fabrication. Of these 23, a questionable ‘line’ was found between the recipient and postmarked information. Parts of letters and enveloped were cut up and pasted onto other letters and envelopes. ‘Jun’ has been accused of “intentionally attempting to hide where the letters were sent from.” As of March 10, 2011, the National Institute of Scientific Investigation stated their suspicion that the letters may not be those of Jang’s.

And so it looked set to roll on in uncertainty, until the highly predictable actually happened.

Oddly, this statement contradicted an earlier statement, claiming that the handwriting had been positively identified as Jang’s. Even more peculiarly, on the subject of fingerprint identification and whether Jang’s fingerprints were found on any of the letters, the official response from NFS was, “That is not our job, it is up to the police.”

Somewhat unannounced, on the afternoon of the same day a Kim Kap-sik, identified as a police officer working the Jang Ja-yeon case stated the following:

“The man denies he fabricated the letters, so we don’t know how he accomplished it…”

The police then informed the gathered press that Jang’s DNA and fingerprints were not found on the letters, that inmate ‘Jun’ / ‘Jeon’ had apparently claimed to his brother-in-law in 2009 that the letters were put together from information available on the internet, that he had been found to be in possession of 300 news cuttings.

It was also reiterated that the inmate had a history of mental illness and schizophrenia.

Following her death and the revelation of the now-famed list, Jang was also said to have a history of mental illness, although this was never proved publicly.

For the inmate to have written his fabricated letters in prison, from 2009 onwards he would have needed access to not only the Internet but to the Web sites that were originally carrying the list and consequently shut down in early 2009.

The National Police Agency has now stated that the case is closed and will not be reopened unless further solid evidence comes to light.

Elsewhere and meanwhile, Mr. Kim and Mr. Yu, the two men at the heart of the initial investigation have admitted to the following charges:

Kim, Sung-hoon acknowledged that he struck Jang with a water bottle.

Mr. Yu, who admitted that he spread information about Jang’s death through the Internet and the press, was charged with the attempted defamation of Mr. Kim.

Kim and Yoo were convicted with each receiving a two-year suspended jail sentence and 160 hours of community service.

Peculiarly, the most recent spin to the story lies in Park Cheol, Head of the Seoul Prosecutor Detective Department announcing that he is to investigate MP Lee, Jong-geol on the grounds of another defamation case. The Chosun Times has filed said case against the MP, who serves with the Minju Dang (Democratic Party) on the grounds that the MP had mentioned in the National Assembly that Jang had claimed in her original note of 2009 that she had had to have sex with a ranking member of the newspaper. It is worth noting that the Chosun Times has also already attempted to sue MP Lee Jeong-hee, Head of the Minju no-Dong Dang (Social Democratic and Labour Party), for her naming of the same suspected man whilst on MBC.

Both Minju parties are adverse to the currently ruling conservative Hannara Dang (Grand National/Korean National Party) presidency of Lee Myung-bak, which is backed within the written press by The Chosun news network.

Although abhorrently coincidental, if the court cases are won by The Chosun and the story of Jang Ja-yeong continues to undergo its highly controlled spin at its currently astounding rate, the outcome may not be too damaging for the political cannon fodder inevitably hit in any decent election run, come the 2012 election.

With attention spans being rapidly redirected to new avenues, whether the pending revelations will truly reignite this case in any direction relating to the initial subject matter remains to be seen; despite the shock and tangent factor of recent news it seems unlikely that thirty one prominent South Korean figures will be imprisoned for something deemed largely as acceptable.

The Korea National Commission of Human Rights conducted an independent survey of the entertainment industry in South Korea in 2010. Out of 351 actresses aspiring artists interviewed, 6 in 10 have been propositioned for sex.

Whilst Wikipedia is not known for its generic accuracy, due to a decree in South Korea marking the publication of Jang’s list as illegal by any South Korean News or Press Service, what remains of the known names have since been dumped onto the open-source site. 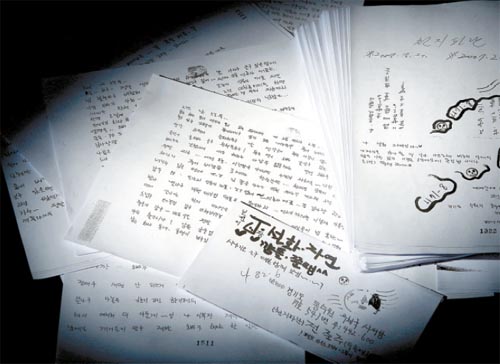