Recently in Salon.com comes the news that MGM studios is changing the villain from China to North Korea in its re-make of the campy but cool stories-for-boys flick “Red Dawn”. The original Red Dawn had a group of teen-age boys—some from the football team and others seemingly more comfortable on the sidelines– packing up together as “The Wolverines” to defend their home town from a Soviet Union conspired invasion. Soon, the girls join as everyone becomes militari 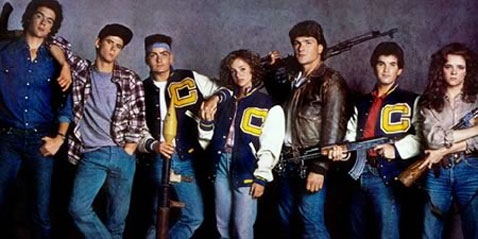 zed to survive. They wage war on the invaders not so much as to liberate their town but mostly to piss off the bad guys. The 1980’s film holds a cult status for those who remember the threat of the Russian bear or for those who would rather ponder about high school cliques instead of individual on-line popularity contests.

Here is an excerpt about the film’s remake:

Whether you are a “Red Dawn” fan or not, the episode shows that for all the high-minded theories about American cultural exports aiding democratic ferment and challenging autocracy, the dynamic is starting to work the other way as autocracy gives orders to American culture. Indeed, wielding its increasing market leverage, China is now countering our First Amendment ethos with a push for what Times reporter Ben Fritz calls pervasive “self-censorship” — the kind in which America’s media industries preemptively shape content to keep China’s dictators happy.

The 3WM response to MGM—shame on you panderers.  Then again maybe casting China as the villain is akin to inviting a premonition.  In the 1980’s celluloid American teenagers could unite and protect themselves from the Soviet empire. In the 2011 version of “Red Dawn”, this back-story of changing the villain to appease Chinese cultural sensors seems to be some kind of defeat of “The (original) Wolverines.” Well, at least it’s only the re-make of a movie, isn’t it?