Editor’s Note: 3WM welcomes the news that the Rocktigers are hitting America to carry on the Indie experience: and by Indie we mean East chopsticks  West. It’s not about the badge of Race: Badges, Badges rock ‘n rollers don’t need no stinkin’ “Race Badge”! 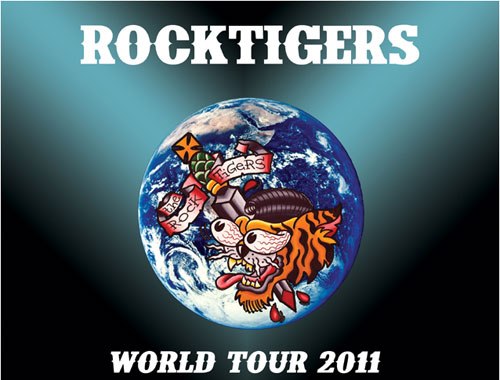 In the this-must-be-hip neighborhood of Hongdae—which is so absurd because students, clubbers and everyone else who can’t dance yet go there anyway are completely cast in trendy appearances and full up with the at-the-scene attitude that only money can buy. Combine the usual suspects with the truth that Hongdae is not subculture it is the dominate weekender in town culture and then riddle this: when has hip ever been dominate?  And it is the hustle-hustle (bal-lee bal-lee) on weekends that clubs in Hongdae have to step to because not much happens in them during the week. It gives the place a manic depressive moon shadow to get caught in or to avoid; so better to reckon with the place as it really is without the hype:  one of the three or four student zones in Seoul: the capital city of ROK and a monster megapolis of East Asia.

This night inside Club FF was Korea’s knock out match against Uruguay I believe, well,  I know it was one of the Guays for sure. The belly of the place was packed with Koreans and foreigners sitting on the floor and watching the match with warm beers. The DJ was on cue practicing push-button nationalism with the Dae Humingo Chant (however it’s anglicized) when team Korea did something good on the field and the misplaced cliché We are the Champions when Korea scored one goal. And during the break at halftime, the Dj outdid himself in the world of camp when playing the Village People—YMCA  to get the crowd ready for half  2 which of course for many many Korean soccer supporters was the final act of this 2010 World Cup.

For added  flavor, the picture was lost on the giant HD screen for the last 5 minutes of the match… go figure. Though this began the most dramatic part of night: it was a Chinese Fire Drill with the 21-year old cupid’s scarecrows dressed like 12 year-olds remaining behind the small bar in a desultory fog. Staring into their I-phones and reading the signs to make sure their teddy bear boys still loved them.  It seemed a better strategy to me at least to instead start pouring really strong drinks. But you know the type; when they are not behind the bar dreaming about love they are in the urban world pushing both the up and down button on the elevator at the same time. Not because they are unsure whether they want to go up or down, but only to see two buttons glow instead of one. Like I said… you know the type.

Outside Club FF (Funky Funky) the red pepper paste revolution was in full spread. More dissolute faces on the small streets in Hongdae as innumerable numbers of locals both foreigner and Korean carry a zapped look that supremacists must get when the off switch is thrown by some unknowable false deity who  is never campy or false when things are going your way. Not to worry though, Koreans and Foreigners have another four years to get used to really sharing the care about something with each other before the next World Cup. And that dissolute look: I get it: in my two years of teaching at Hongdae University I also carried around that same look because though Hongdae is the prime fine arts school on the peninsula, it has to be the most incongruous layout of bad angles and night-mare induced buildings that aborted good taste could ever come up with and then somehow live with.

But all might not be lost. Soccer and hipness weren’t the reasons for me really being at Club FF. A manager who safely made it through the Fire Drill by rolling up his jeans and snapping a role of green duct tape up with his white skips and then arm sliding the tape up to his tricep, got out of the pogrom  with a red board marker and wrote something clear on white poster board,

“We Loose But Party Must go on.  Rock Tigers!”

So the crash of losing at soccer is about to meet the bash of live music in a small basement; the best space to listen to the rockabilly of The Rocktigers and the timing is okay. Rockabilly music is simple. The throwback sound is really universal feedback and blowback. Its fast-pace reverberation songs are about revealing the deck of cards that all of us have been dealt and have to play. If I had to put that play into words they might be a list of questions: Like, what the fuck does the world want of me? And why get out of bed in the morning to find out…, how to say No to parents for the first time, who to dance with, what to dance to… And of course what the hell is sex and how can I get it! And really the original question of existence: What is it to be Cool, to be Hip? The hipness quotient of Hongdae be a damned dead cliché. Rockabilly is infectious if you don’t have hard ears and think that the night-time space on the floor in front of a band is for a select audience that is cocksure that all good sounds carry an invitation to navel-gaze. Fuck that noise try this. Shake Rattle and Roll and Rockabilly in a more recent quest to feel something real: Reverend Horton Heat

In other terms Rockabilly dissolves race and class instead of buoying up a hipster’s premise which is pretending that troubling stuff never really existed and that it’s just not worth it to care. But for the 50% of Koreans who were in the FF audience the rockabilly sound gives them an understanding of America. One that came when going to a McDonald’s wasn’t a put down and one before ESL books were invented and TOEFL tests became a cross-cultural standard for the unwitting non-English speaking clans. But wait, this is a review of The Rocktigers and for sure going to see The Rocktigers is on the Expat to do list. (TO SAMPLE The Rocktigers music and find where they are playing  click here.)

They are inspired by Japanese Indie band Guitar Wolf but with a much less cultish and more boogie woogie sound. More retro, a guitars on the beach so the surf is up style.  They open up with their own anthem which defines their sound and then step on the gas. The shortened set seemed to accelerate the band to quick focus and get the audience out grappling with each other within the sound. By the third song Cry Baby, the multi-harmonies put everyone in a full forward mood. That live rock ‘n’ roll thrashing and releasing old fashioned Hormones mood. Nothing tamped down to personal conjecture, no willingness to match the shadows on your bedroom wall…just sexy music.

The persona of Velvet Geena, Tiger, Roy, Eddie Tarantula and Jack “The Knife” is both alive and inviting yet more than once I found myself looking away instead of zeroing in on the eye-contact that a small space like FF club invites… Perhaps I have never seen or felt the Korean blood pump and pulse in such unpretension. Loud rock ‘n roll can still be a scary moment. The greasy pompadour presence of the whole group wields out wildly like comic book heroes who are ready to cross the threshold of the stage, come to the rescue, give more life out to the audience then they can receive back. And in a rock ‘n’ roll or whatever to do on a Saturday night lexicon isn’t that the definition of charisma?

The song of the set was Vengeance is Mine. Playing  a slap –base, the bass player Roy reminded me when I met Bryan Setzer of the Stray Cats at an unfamiliar liquor store in New York—I was asking a lot of questions then like ‘What the fuck is a Reagan Revolution?’ But instead of bleating that out I was going to ask Setzer, the famous rock-ability captain, if he would take the money for the eight pack of Lowenbrau Nips I carried in my hands. But just before I could do it he shot me a look; just some look that said,

‘Be a man. Put that under your arm and go to the front, pay and don’t forget to count your change.’

And that’s what I did. And that was charisma. I mean a passing on of what that hipness thing is. If you got it, it’s a gift and to give it to someone else happens in the blink of an eye. And at any time, past present or future… To flip up your collar simply because the rest of the world wears theirs down.

Velvet Geena’s voice is accessible whether the songs are in English or Korean as the lyrics themselves are often blithely undecipherable and sound like they come from a special parallel universe where whatever the language being used, you are willing to bet anything that you know what’s being said. You might see her walk into a be-happening-or-the-doors-close–club in Hongdae and think, ‘There goes another Asian chic with a Dragon Tattoo’. She’s definitely not the primordial type of Asian woman that the Choseon Dynasty natives nor watchers of National Geographic TV would want to play house with. This is a genuine big city hellcat. Her onstage personas offer females in the audience a view of someone who has gone sideward of the laws of perfume and nail gloss. Nor is she cow-girl butch nor the fey Girl at art school fem-icon on the way to NPR’s song of the day. But you see Velvet Geena hung out at a different charm school the same one as Patty Smith and Karen O  of the Yeah Yeah Yeahs

And even without any copy cat greasers in pompadours, the cats in the audience experience something different to put in the data bank of images and info. In fact, there might be hope for capitalism if Starbuck’s Korea sold The Rocktigers’ Cds or downloads–as if that was possible. I suppose the whole truth and nothing but the ironic truth sounds a comic note: that a sound like Rockabilly would become a discerning sound in a city named Seoul. Now if The Rocktigers would only start playing outside of the hipsters’ ghetto called Hongdae…Or, if only a Cadillac from a hipper era would start driving around the streets.