HomeFrom the SceneMonkey Business in Jakarta: A Street Performer Speaks 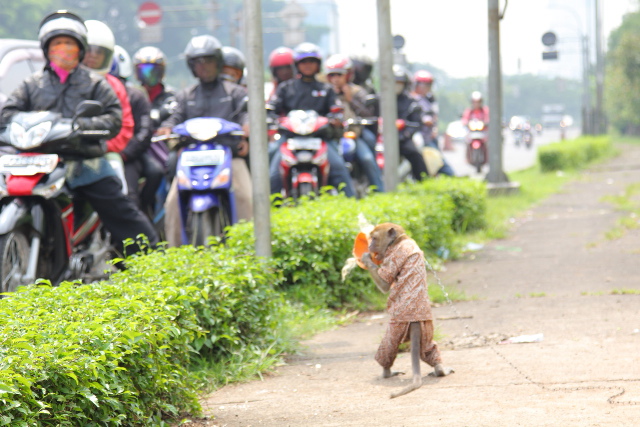 On the side of a busy dual carriageway in Jakarta, we filmed a double-act street performance. Motorcyclists stopped at the red lights of the cross junction and threw one thousand Rupiah notes, drivers glanced from air-conditioned cars, and children stared and smiled. Afterward, we were lucky enough to get an interview.

Me: I’m just going to ask a few questions; relax, it can be fun. We liked your show! So, what’s your name and where do you come from?

Me: Do you mind stating the question in the answer? I want your voice to stand alone in the documentary.

Bejo: My name is Bejo and I’m Indonesian.

Me: Where did you grow up?

Bejo: My first memories are of being jerked around in a dark box, kind of sweaty and scary, but Jakarta is really all I know.

Bejo: Better than the box.

Me: How long have you been busking? 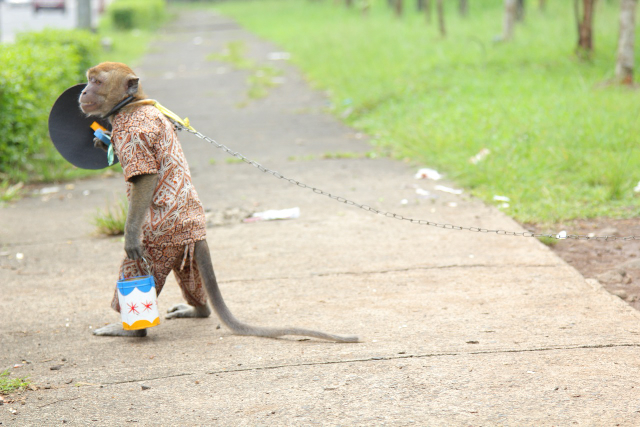 Bejo: Well for a long time I wasn’t good enough to busk and my life was all about training. Every day I’d have to learn what to do, what was expected of me, and how to do it better. It was tough times, but slowly I started on the streets and became more confident with each performance. That’s really what the streets give you, confidence. But to answer your question, I guess I’ve been busking full time for about two years, although Abas, my partner, was in jail for six months of that.

Me: Can you expand on that?

Bejo: It’s illegal to perform on the streets in Jakarta, and when the police came they had sticks and they hit us. I managed to climb a tree, but Abas wasn’t as fast and the police took him away. I waited outside the prison every day until they released him, picking through the trash for food and sleeping wherever. Not good!

Me: But you still do it?

Bejo: What choice do I have?

Me: Ok, so talk to me through an average day.

Bejo: Well Abas lets me sleep in the same bed as him, so I wake up pretty hot and always itchy. In the morning he does a lot of the admin work around our act, like keeping tabs on tips. I’m not too good with numbers. But I pull my weight while we’re actually performing. You know, whizzing around on that motorbike, wearing the mask, playing the guitar. I’m really the focal point – the reason people throw cash at us – and that makes me feel worthwhile.

Me: What are your motivations in life – what do you want?

Bejo: I’m a simple soul, kind of happy with Maslow’s lower tier if you know what I mean. Shelter, food, sex. Like most of the world really, the difference is I’m honest about it.

Me: And you satisfy those needs?

Bejo: We’ve got a good spot under the overpass and we earn enough for a big feed here and there. I don’t get much sex, but Abas doesn’t mind me playing with my penis as long as it’s not while I’m performing. So yes, I’m satisfied.

Me: What about moving up that pyramid – satisfaction, success, well being?

Bejo: I said I was simple – I like to know who my boss is and I like a routine – this lifestyle gives me both.

Bejo: You’re talking about the chain aren’t you?

Me: It doesn’t look that comfortable.

Bejo: Listen, I’m kind of easily distracted – it’s in my genes or something, ADD I think. If it wasn’t for the chain I’d probably be living in a tree somewhere wondering what the hell to do. 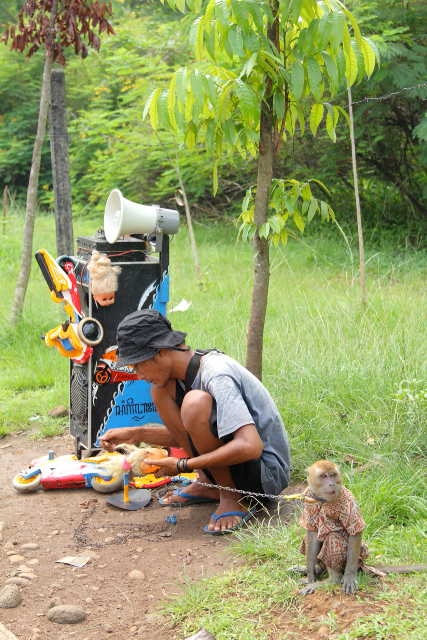 Bejo: Your problem is that you’ve come here expecting to feel sorry for me, that’s your western mentality, thinking you’re oh so better. I’ve seen the news – what about Crufts?

Bejo: And who domesticated them?

Me: It’s not like they’re doing it for money.

Bejo: That makes it even worse – you ‘kind’ people train those poor dogs to do all those tricks just for a bit of fun, a rosette, and some sort of inner need to command and conquer. At least Abas has respectable economic motivations.

Me: So you don’t think the whole performance is cruel?

Me: Ok, calm down, put your teeth away. Let me finish up with, do you have anything you’d like to tell the world, as a street performer?

Bejo: Abas is kind to me, and in a way we are both performing like monkeys, sitting at the side of the street all day every day. So if you’re worried about cruelty – what about the world that puts him there? 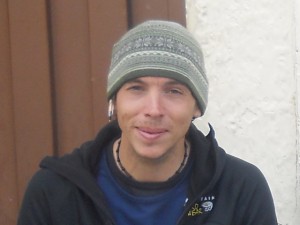 Chris Smith has been published in UK and American journals, including Tindal Street Press’ Roads Ahead (ed. Catherine O’Flynn), The Manchester Review, Mid-American Review, and Nashville Review. He was a finalist in Glimmer Train’s Short Story Award for New Writers 2009 and long-listed for The Brit Writers Award 2010. He writes for www.thebuskingproject.com and www.urbantheoryfilms.co.uk. www.chrismithonline.com