A Statement by the Asian Human Rights Commission 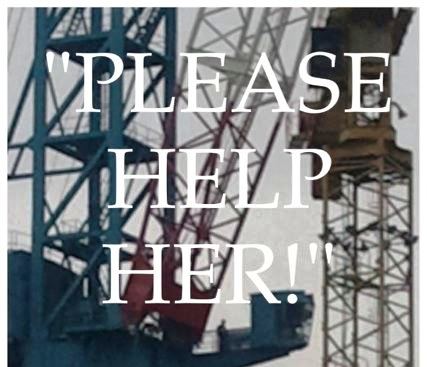 The long struggle of a female worker has drawn the attention of both the local and international community. Ms. Kim Jin-suk, a member of the Korean Confederation of Trade Unions (KCTU) has been occupying the cabin of Crane No. 85, which is 35 metres high, in the shipyard of Hanjin Heavy Industries and Construction (HHIC) in Busan for six months. Ms. Kim is demanding that the company reconsider the dismissal of dozens of employees and is refusing to leave the cabin despite being sentenced for trespass in January. The sentence carried a find of KRW One Million (approximately US$ 1,000) for each day she has occupied and continues to occupy the crane cabin. Her struggle casts doubts as to the society’s interest in matters of labour and also the role of the government in respecting, protecting and fulfilling the human rights of a third party when business enterprises are involved.

It is known that the company has been trying to reduce the cost of local labour and relocate part of its production to the Philippines. To this end it initiated the establishment of a shipyard in Subic Bay in the Philippines in February 2006. Due to the instability of domestic labour in South Korea a special agreement was made with the trade union on March 14, 2007. Some of main contents of the agreement are, according to the article 2 of the agreement, (1) the company will make the utmost effort to secure the amount of orders received for three years consecutively domestically, (2) the company shall not make arbitrary lay-offs such as minimising staff or closing of domestic factory/s based on the reason for management and (3) the company shall not take steps which do not guarantee the retirement age including dismissal of the employees according to the collective agreement, as far as a factory in foreign country is operating.

However, contrary to this agreement the company started dismissing around 3,500 employees including irregular workers under the guise of voluntary resignation for financial difficulties since late 2009 and the layoffs are still going on. What is known is that the Philippine subsidiary of the company was able to manufacture 23 ships that could have been constructed domestically in the first half of 2010 whereas not a single order was allocated to the South Korean factory in the same year. It therefore appears that the company’s reason for dismissal is not justifiable.

In fact, this is not a single occurrence that the Korean society has faced. There have been many layoffs and massive dismissals by business enterprises. In the case of one motor company, after the layoff, over a dozen former employees either committed a suicide or died due to Post Traumatic Stress Disorder. Research shows that over two third of the employees suffer severe depression and need urgent psychological treatment.

The question then arises as to what obligations and duties the Korean government has under international law to respect, protect and to fulfill human rights. And of course the next question is as to why the government fails to do so.

The obligation to respect means that the government must refrain from interfering with or curtailing the enjoyment of human rights. The Korean government must protect against human rights abuse by third parties, including business enterprises. This requires taking appropriate steps to prevent, investigate, punish and redress such abuse through effective policies, legislation, regulations and adjudication. 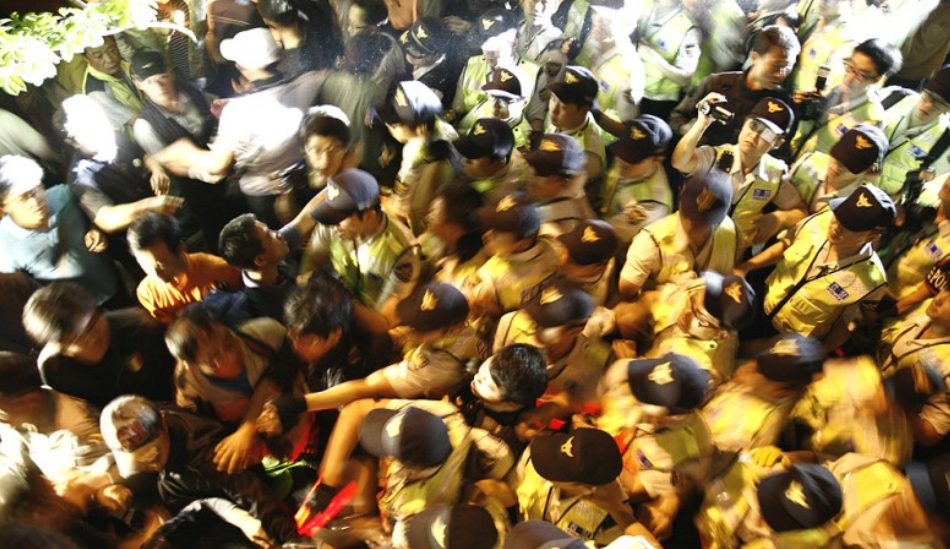 There are many domestic laws that claim to protect the rights of workers. However, one main problem with regard to layoffs or dismissals is the broad interpretation of the definition: ‘urgent need for management’. Therefore, layoffs or massive dismissals are the easiest way for business enterprises to reduce their overheads. The Local Labour Relation Commission which has a primary authority to judge whether or not a dismissal is legal or otherwise make decisions in favour of business enterprises with the limited information provided by them. In addition, even though there is a serious procedural flaw of an agreement between the company and negotiating body which is a trade union, it is not taken seriously. Having an agreement in whatever way is acceptable, which often results in violence. Furthermore, the fragile social safety net is also a serious area of concern.

The obligation to protect requires the government to protect individuals and groups against human rights abuses. While the protest was going on, the company asked the Busan District Court to issue a letter of forcible eviction against those protesters on the premises of the shipyard which was approved on June 13, 2011. Although the negotiation between the company and its union was supposed to start from June 24, the court execution plan for forcible eviction was announced and it resulted in the failure of negotiation. In the process of forcible eviction, many protesters were assaulted by the law enforcement agencies and those who acted on behalf of them. No action has been taken against them. Meanwhile, a group of police officers conducted a practice operation for when it is necessary to take Ms. Kim down from the crane.

Many civil organisations including rights groups asked the government not to deploy the police force but instead to provide space for faithful negotiations between the concerned parties. Sadly the government did not take any action. Meanwhile, an agreement between the company and the union was made on June 27 which is controversial in terms of the representative of the union who signed the agreement. Based on this controversial agreement, the police are now taking steps to crack down on protesting members of the union and legal action against those who support the struggle of Ms. Kim and her colleagues.

On June 11, around 600 people went to an area near the shipyard to show support for Ms. Kim and her lonely struggle and to show their solidarity. Later, more than a hundred received letters of summons from the police. On July 9, in order to commemorate 185 days of Ms. Kim’s struggle, 185 buses nationwide are going to Busan to support her struggle and to ask for the nullification of the controversial agreement. Meanwhile, the Busan local government held a press conference in which it asks the public to cease its intervention into the struggle of Ms. Kim and her colleagues. 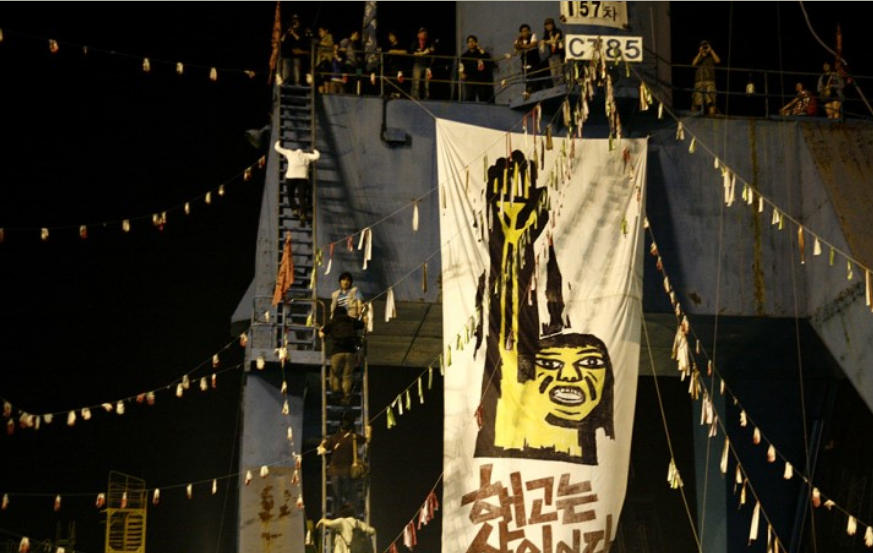 Recently the company has now cut the electricity supply to the cabin which Ms. Kim has been occupying and prevented union members from sending food, medicine, clothes and lantern batteries. On June 28, Ms. Kim asked for urgent relief from the National Human Rights Commission of Korea (NHRCK) but her request was dismissed based on the reason that the company agreed to provide the necessary items. However, despite the fact that the company has reneged on its promise the NHRCK has taken no further action.

It is sad to acknowledge the fact that while international efforts have been made for establishing ‘guiding principles on business and human rights’ which was endorsed by the UN Human Rights Council on June 16, 2011, the South Korean government including the NHRCK have continuously failed to take positive action to respect, protect and fulfil human rights in the country.

The Asian Human Rights Commission (AHRC) expresses its solidarity to those who fight and struggle for human rights in South Korea and ask the government to make a comprehensive scrutiny on how such domestic laws, which are supposed to protect human rights including rights of workers, have been misused by the business community with the full participation of all concerned parties. The failure to prevent, investigate, punish and redress such abuse by business enterprises through effective policies, legislation, regulation and adjudication does not mean that the government is exempted from its obligation and duties in the country.

Under these circumstances, firstly, the legal term ‘urgent need for management’ should be strictly applied and the supporting documents must be thoroughly investigated with the full participation from all concerned parties. A comprehensive and appropriate social security net should be introduced for those who are affected by layoffs or dismissal and other marginalised group. Trauma counselling should be also included.

Secondly, from the country’s past bitter experience that people suffer from financial burdens due to hedge funds or speculative investments of foreign capital, appropriate regulations and control over such capital should be introduced. Domestic laws must be introduced to ensure prevention, investigation, punishment and redress into human rights violations directly or indirectly incurred by the country’s foreign investments.

We also would like to draw attention to the role of the NHRCK with regard, not only to the case of Ms. Kim whose request was dismissed, but also the area of human rights and business which the NHRCK claims to make a priority. On the contrary to the presentation on the role of the NHRCK by the NHRCK itself at the international forum held in October 2010, we deeply regret that the passive and ineffective action by the NHRCK into the current situation of Ms. Kim only demonstrates that it either exaggerated its activities at the forum or undermined its mandate in domestic incidents by taking no steps in providing non-judicial remedies or making policy recommendations.

If the police allow such violence to occur during the demonstration on July 9, the government will be unable to deny its responsibility.

The AHRC wishes to take this opportunity to note that it is human nature that people whose rights or dignity is violated to seek help from others if the normal way of communication does not function. The more people who respond to such help means the healthier civil society is for the Korean government. The government must appreciate such people and encourage them rather than taking legal action to restrict human nature.

About AHRC: The Asian Human Rights Commission is a regional non-governmental organisation that monitors human rights in Asia, documents violations and advocates for justice and institutional reform to ensure the protection and promotion of these rights. The Hong Kong-based group was founded in 1984.

The Subway Clashes of a Changing Korea

Super-funky Seoul Corner: Lavell Kamma and the Afro Soul Revue ‘I Know Where It’s At’