HomeArtSuper-funky Seoul Corner: Lavell Kamma and the Afro Soul Revue ‘I Know Where It’s At’

Super-funky Seoul Corner: Lavell Kamma and the Afro Soul Revue ‘I Know Where It’s At’

One of the first soul/funk 45s I ever bought was Lavell Kamma and the Afro Soul Revue on the “Tupelo Sound” label doing “Soft Soul/I Know Where It’s At.” I would listen to it at home, but I never played it out. I liked it a lot, but it just never fit into any of my sets. Maybe one day…. So when “Funky Seoul Corner” was created, I decided to make this a forum of 45s I rarely, if ever, get the chance to play live. This is one of those records.

Before and while I write my blurb on a 45, I do a check online to see what 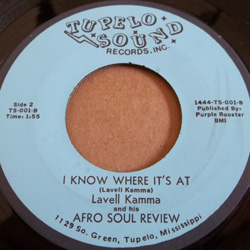 information is out there. I did the same thing with this 45. Here’s what I found: I found sites, like YouTube, where you can see this 45 spinning around and playing; I even found sites where you had very brief discussions and reviews of the 45. I did discover, for instance, that this 45 was released in 1972. I never knew that because there is no date listed on the label. Of course I consider the source, so 1972 may not be the correct year. But once you listen you will feel that 1972 sounds about right. All of the above is fine and dandy but my online search did reveal one more find, and a surprising one at that.

I found out that Lavell Kamma has a page on Myspace! Here’s the link you can check out for yourself: http://www.myspace.com/thelavellkammaband. Hi-de-ho! I never thought I would be reviewing a record performed by an artist who is still alive! Anyway, if you go to his page, you can read some interesting tidbits in his brief bio. The music selections on the page are somewhat bizarre. I only listened to a couple of tracks because you hear this white-boy-hillbilly voice talking and singing!?! What is this all about!?! It sure isn’t Lavell Kamma singing, that’s for sure! Maybe he was the one playing the keyboards, but I tell you what–that ain’t the Lavell Kamma I know! You’ll know what I mean if you compare the 45 with the music selections on his Myspace page.

But the real kicker is if you scroll down his Myspace page you can click on a video of him performing in 2010. Now that’s most likely the Lavell Kamma I know! Getting down as a one-man-band—really! In fact, for a man of his age, he kicks serious booty! Part of the video captures the patrons of the establishment funkifying. It’s what you would expect from a 2010 video. Without giving away anymore details, I will just say I really enjoyed watching it. (It’s way cooler than listening to those weird music selections up above on the page.) It provides a nice contrast to the 45 you will listen to that was recorded over almost 40 years ago. I also noticed that Lavell Kamma only has five friends on his Myspace page. What?? Show him some love!!!