THE CRANES OF YONGDO: The Fight for Workers’ Rights in Busan

On Saturday, July 9 thousands of people descended on the Yongdo area of Busan as part of the ‘Buses of Hope’ campaign. Busan police estimated 7,000, while the organizers put the number at 9,000. One hundred and eighty-five buses travelled from all over the country—from Daegu, Daejon, Suwon, various parts of Seoul, Incheon, Gwangju and other parts of Jeolla-do—delivering protesters to the scene. They got off the buses in the pouring rain and marched en mass up the road; their intention was to head straight toward the Hanjin shipyard where in the cab of crane No. 85, some 30 metres above the ground, was Kim Jin-suk Direction Committee member of the Korean Confederation of Trade Unions.  Kim has been in or around crane 85 since January 6.

Saturday night, however, the way was blocked maybe 300 metres along the road. In the centre, side by side, were two white trucks with menacing looking water cannons mounted on top. Each one also had a large camera. It is worth noting that according to the Asian Human Rights Commission ‘On June 11th, around 600 people went to an area near the shipyard to show support for Mrs Kim (Jin Suk)…Later, more than hundred received letters of summons from the police.’ This seems to be another popular method of intimidation used by the authorities. Yet from the turnout this weekend it doesn’t seem to be having much effect. On each side of the trucks were buses and beside the buses, shoulder to shoulder, stood row after row of police officers.

This is how I would put it: bothered by the quintessential Korean summer rain, after an epic bus ride down the peninsula; met by police in riot gear, swinging batons and straddling trucks mounted with water cannons; unable to get to the shipyard, as one man from Seoul put it to ‘simply set our eyes on Kim Jin-suk, and see her face’, inevitably tensions rose and tempers started to flare. Some demonstrators hammered on the plexi-glass. There was absolutely no chance of it breaking. Nonetheless, this triggered a swift response—the police in small groups lunged into the crowd, lashing at people at random with their fists or batons.

It became a battle of wits as the demonstrators gave the plexi-glass a shove then the police in tactical formation would plough into the crowd lashing this way and that. At points the police would try to grab an individual demonstrator and the demonstrators would do the same thing, attempting to pull an individual officer deeper into the crowd. This ended abruptly with an order from somewhere that resulted in dozens of police officers in line after line, running at the protestors, this time knocking people down and beating whatever and wherever they could. The water cannons fiercely sprayed the crowd; followed by the launching of tear gas canisters. A few people I talked to on the more festival-like Sunday afternoon swore the police put something in the water—they claimed it smelt and tasted sour—and disturbingly that it irritated or even burnt the skin upon impact. 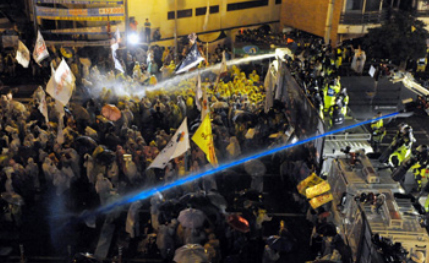 The protestors were pushed back brutally from the barrier; 50 people were arrested during Saturday night’s mayhem. There was talk of not moving until all those arrested were immediately released. But lack of sleep, physical and mental enervation and perhaps pragmatism (it was Sunday, and most people do have to get home, so they can go to work in the morning) led to general capitulation—talk was just talk.  And maybe this was for the best.  The police appeared ready for whatever was thrown at them.

When I arrived on the scene mid-morning Sunday, a large group of people roughly 30 to 35 strong were dancing around in a loose circle to the beat of several traditionally dressed drummers banging hour-glass shaped drums called janggu. Lots of people were sitting around as if in the park having a picnic; some were calmly sitting sharing snacks or fruit while many others seemed to be sleeping having spent the night on the street fending off the Busan police. There was a P.A. system and throughout the day several people got up to speak. It was around this time that a police helicopter kept doing the rounds. It was unclear why there was any need for a police helicopter to be flying noisily overhead though general intimidation seemed the likeliest reason. On the rooves of various surrounding buildings police photographers were capturing the events and the participants. I have already mentioned the cameras attached to the water cannon trucks. These alone would suffice to keep all at the demonstration under observation. Then there were the thick-set men dressed in polyester/lycra pants, thick socks and polo shirts—a style ever popular with a certain age of Korean men. From the right ear of every one of these men a wire dangled—they didn’t look like demonstrators, though they were standing with demonstrators.Their conspicuous appearance seemed like over-kill when there was already a heavy, visible, armed and uniformed police presence.

Father Moon Shin-bu, a highly respected but iconoclastic Catholic priest, did something that sounded like a delightful cross between a limerick and a rap; the butt of which was definitely President Lee Myung-bak. Finally, over the speakers came the voice of Kim Jin-suk, the woman whose example brought us all to Busan. She was but a kilometre and half away behind the police roadblock a-top the cab of crane No.85 in the shipyard Hanjin Heavy Industries was trying to close down. She talked for maybe 10 minutes and to my great shame I could understand barely a portion for what was said.

The people I saw demonstrate their support for Kim Jin-suk having been beaten with batons, hosed down by water cannons and distressed with tear gas responded with music, with humour, with courtesy. They have responded with respect for one another. They have responded with organization, which is not sexy or fashionable but sure gets things done. And more importantly, they have responded without violence. At the zenith of the sun, with no shade to be had, as if from nowhere two middle-aged women started handing out ice creams. Later two young men went around distributing rice balls. Watching, the police in their body armour, sweating under their helmets, stood shoulder to shoulder 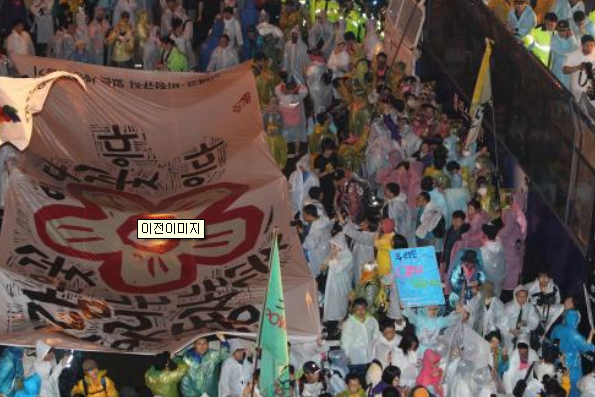 awaiting orders. What I saw and experienced of the demonstrators—how they behaved; which organizations they represented: Korean Gay Pride; trade unions, human rights groups from all over the country; people from all walks of life, classes and ages—made me think that they, who’d arrived from all points of the compass on some 185 ‘buses of hope,’ were the moral victors of the Battle of Yongdo. The battle was won but the war is far from over.

When I said I was in Busan to write an article about the protest, the strike and Kim Jin-suk, a woman who herself worked for an news agency said ‘Use twitter, use Facebook to tell the world about this story’.

There’s this woman, she’s 53 years old; she used to be a welder, now she’s a trade union representative. For more than six months she’s stayed in the cab of crane No.85 in a shipyard not far from where I was standing today in Yongdo, in Busan. She is protesting at the way her fellow metal workers are been treated by their employer; Hanjin Heavy Industries and Construction Ltd. Hanjin keeps reneging on agreements it has made with the work force. And it keeps drawing up lists of those it wants to fire. She’s been up there since January 6, 2011. Never mind what possessed her to climb up there in the first place. More importantly, how has she managed to stay up there so long? And when will be the right time for Kim Jin-suk to come down?

John Peter Kay started writing in earnest back in 1996 at art school. Since 2003 he’s taken as his inspiration the sounds, sights, smells, tastes and incidents of life in South Korea. He can be contacted at jessiebellinakay@gmail.com

The Taboo of Korean Psychotherapy