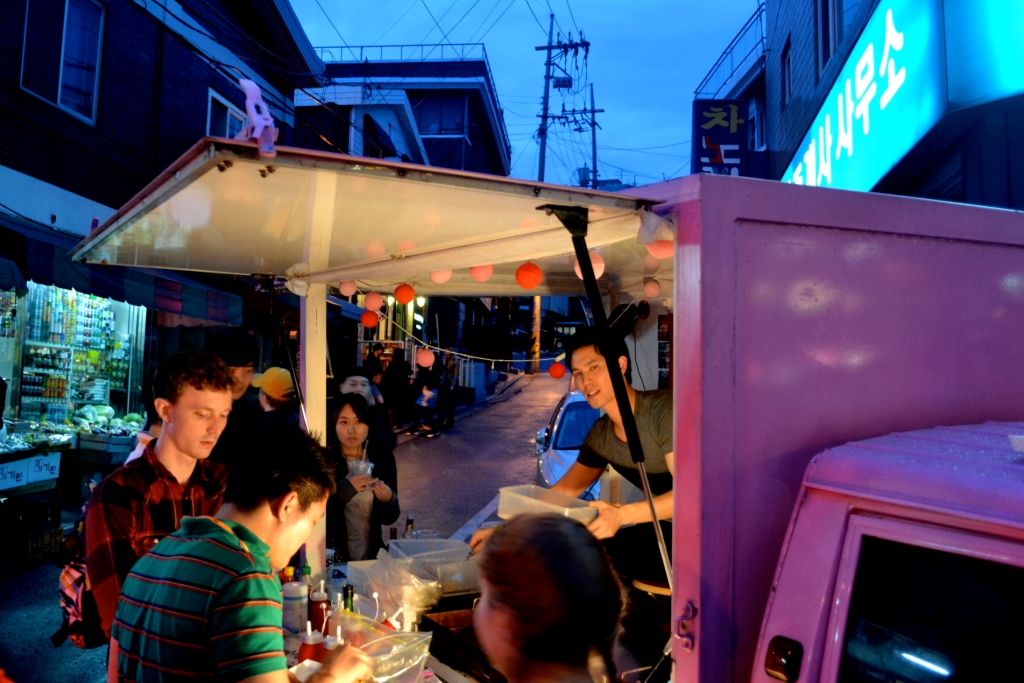 The first image that pops into my head when I think of street food is always tacos, this is partly because of where I am from, but also because they tend to be a somewhat simple, quick and satisfying meal when you are out in the street. Now that I’m not living in San Diego, but expating in Seoul, however, I’ve had to change my thinking and attitude a little bit as the street food here is most commonly the delightfully spicy tteokbokki, super heavy corn dogs or for some, the interesting stone grilled file fish. Koreans like their Korean food, as do many foreigners living in Korea and as do I, but every once in a while I crave a good street taco. Truth be told, I might get this craving more often than some, but the fact remains, wanting a taco is a pretty hard craving to satisfy with what most street vendors in Seoul have to offer. Additionally, it would appear that the food truck movement that is really booming back home hasn’t really hit Seoul in the same way. Well, if you want to buy your oranges or onions, there is a truck for that and it is a very unique Korean experience to buy a whole grilled chicken from a truck, I’m sure.

Recently, I attended the HBC Fest and was very pleased to have found that street tacos are alive and well here in Seoul and have materialized through some rad kids that call their operation the Three Kings Truck. I have visited their truck a number of times since the HBC Fest and can vouch that their creative fusion tacos are something that the Seoul food scene has been benefiting from since 2010. Recently, I was lucky enough to do an interview with the fellas, here, in their own words, are what they are about:

MO: Did you know each other before you came and if so, had you worked together in the States? (You are all from Texas, right?)

3K: Yep, we’re all from Texas. We actually all hail from the same city too, Houston. Phil and I went to the same school, The University of Texas @ Austin, and we partied and hung out together. Johnny wasn’t a good test taker, so he went to Texas Tech University in Lubbock. Poor guy, ha-ha. Phil and I both met Johnny in Korea. 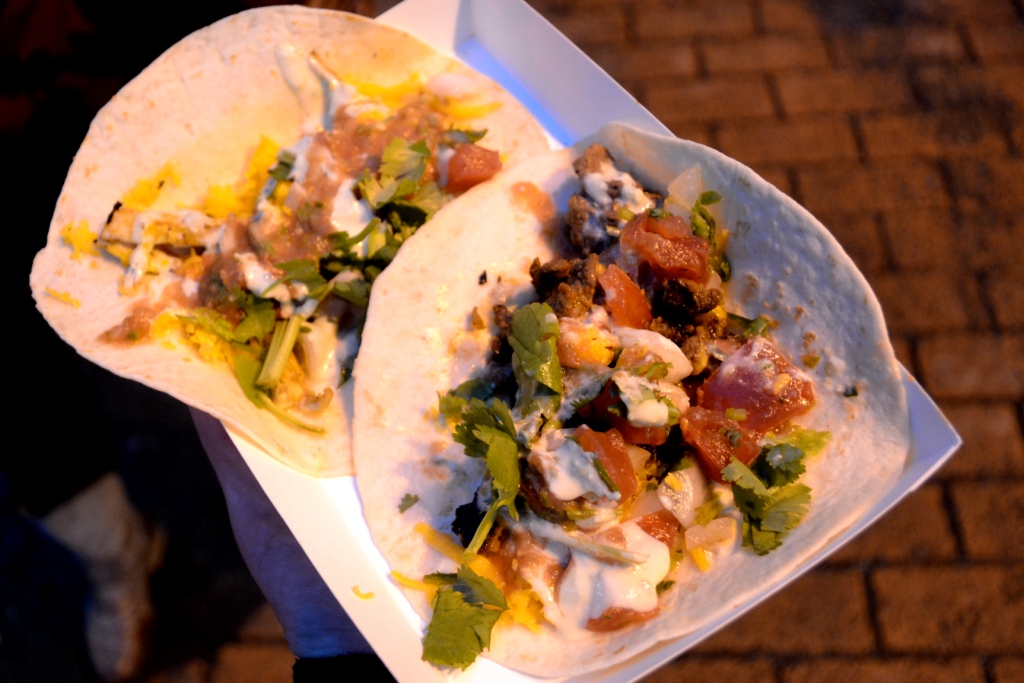 MO: What drew you all to Korea and when did you come?

3K: The, ahem, 3 Kings are Robbie Nguyen, Johnny Yu, and Philip Abowd. Johnny came to Korea in 2007 and he is Korean-American, so I think it was his motherland calling him home. Phil also came in 2007, and it was the adventure and traveling that initially drew him here. I came a little later in 2008 for 3 main reasons:
A. During the summer of 2007, I took a month long trip to Vietnam with my family and absolutely loved it. I fell in love with Asia and the travel bug bit me.
B. I wasn’t really feeling my internship at the Austin Chamber of Commerce and didn’t want to settle for a job I didn’t like. One of my best friends, Frannie, and Phil were already in Korea and they hyped Korea up to me.
C. I had student loans/ credit card bills I had to pay.

MO: Did you come with the intention of bring the taco truck idea to Seoul or was it because you saw a need for such a thing?

3K: I don’t think any of us envisioned running a taco truck when we initially came to Korea. But after 2 years of drowning ourselves in Soju, makgeoli, and Hite we all reached a series of epiphanies:
A. It was time to do something with our lives
B. We love Korea.
C. We love each other. (Our bromance is one for the history books.)
D. We should start a business together in Korea!!!
E. After partying in Seoul, we realized there wasn’t much diversity in terms of food trucks (at that time) and we all came from an area where taco trucks were abundant and then….WahLa! The wheels were set in motion and next thing we knew we were running a taco truck.

MO: Do you have long term goals that involve either food truck service and/or Mexican food?

3K: Right now, our short term goal is be the expat community’s friendly neighborhood taco truck. We want to engrain ourselves in the community and be the go-to food truck for events like Fermentation Celebration and others events like that in the future. Phase 2 would be expanding with more trucks, and having a pink truck armada sweeping through the streets of Seoul. And the big dream down the road, the end game if you will, is to open a hole-in-the wall, brick and mortar taco joint in HBC/Itaewon/ Hongdae. 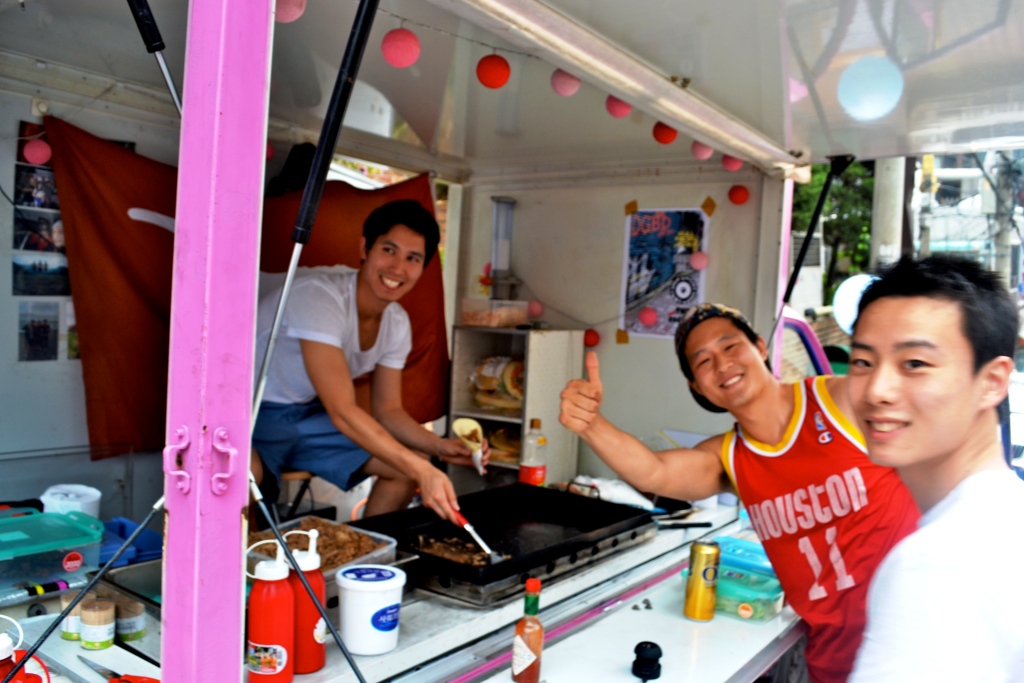 MO: It seems at the times that I’ve frequented your truck you guys were training people, is your business growing?

3K: It’s growing a little bit. We all work as teachers Mon-Fri, so we can only take the truck out 1 or 2 days/nights on the weekends. We wanted the truck to be out more, so we’ve started training new interns. The business is growing in terms of recognition and buzz. We want to be in the back of people’s minds when they are going out on Fri/Sat night and I think we’ve got a good buzz about us as of late.

MO: Are your customers primarily expats or do you have a strong Korean customer base as well?

3K: I’d say 80 percent of our customers are expats. The concept of a taco is still alien to a lot of Koreans, and it’s been tough trying to crack into that market.

As it turns out, in addition to slinging really good tacos and teaching, the guys stay super busy with other side projects. They rap under the name of Jiggae Boyz and are connected with Paul Kim aka Big Tofu (http://soundcloud.com/big-tofu/tracks). Partner Phil the cook and guitar player, is presently traveling around South America. Johnny is a martial arts enthusiast with a travel guide start-up in the works (http://www.facebook.com/home.php#!/pages/VAGABONDS-KOREA/172301966162793). Lastly, Robbie is a hip hop dancing sports enthusiast who has been seen playing on the Gina Phillips’ Ultimate Frisbee League, and RECROK basketball and would like to challenge anyone to a match of the original Street Fighter for SNES. 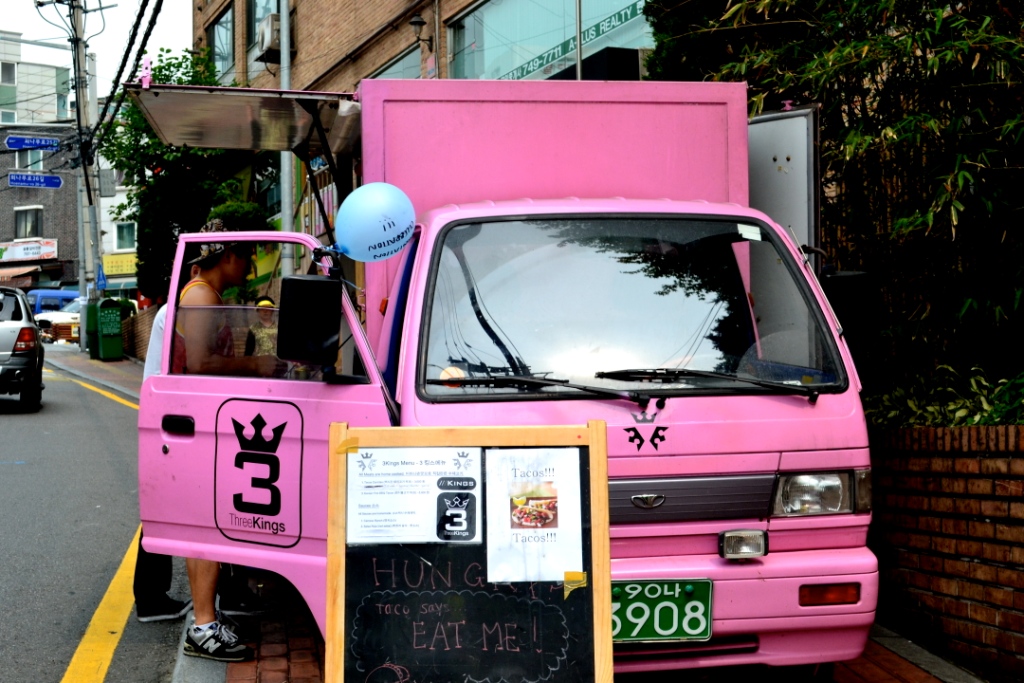 If your desire for street tacos is as serious as mine, or if you are super down for street food and the food truck movement you can hunt the truck down via email (3ktruck@gmail.com), Facebook (http://www.facebook.com/3ktruck), Twitter (http://twitter.com/3ktruck ) or call 010-6261-5101. They are on the streets of Hongdae on the weekends and they are available for catering too!

Megan is from San Diego, CA. She’s interested in things involving cycling, food politics, coffee, taking photos, whiskey, music that incorporates a peddle steel, overalls and cut-offs. When she’s not riding a bike around Seoul or taking photos, she teaches. Her blog is: http://www.thetoohugeworld.wordpress.com.

It Takes a Village? A Quest for the Forgotten Korean Muslim Colony