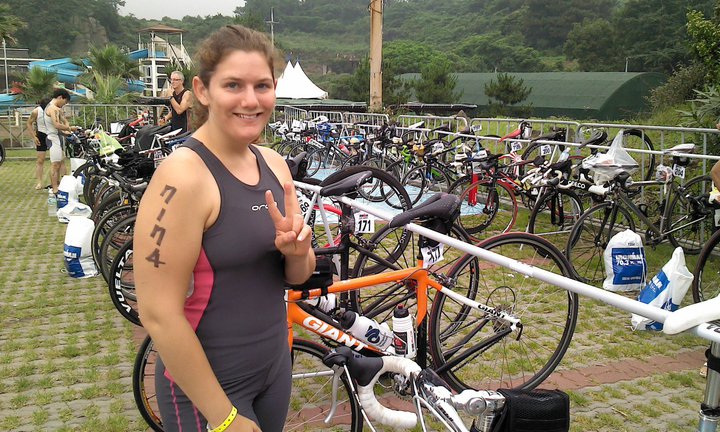 An amazing event was held in Korea over the summer: the Ironman triathlon. If you’re not familiar with what that is, it’s a 2.4 mile swim, 112 mile ride, and a 26.2 mile run.  Massive! They also offered the Half Ironman, which is half the distance, and the race that I did. Here is how it went down on race day for me.

Race Morning and the Swim

On race morning, I got up and had some breakfast, got ready and met a friend before taking the shuttle to the start line. I was surprisingly calm at the start line; I had a slight case of the yips on Saturday morning, but warming up got that out of my system. I hung out with the girls I knew who were also doing the race, and watched the people doing the Full Ironman swim. As 9 a.m. approached, I did my final bit of getting ready, made sure my bike was set up, and then moved my way to the beach.

This race was a mass-start meaning that all participants would run into the water and start at the same time. My plan was to start at the back and swim my way up. Nine a.m. hit and the “canon” (or weak sounding gun) shot off and the race began. I ran/walked my way into the water and then tried to get into a rhythm with my swim. I was able to overtake quite a few people; I did have some problems keeping a rhythm because there were so many of us in the water at once (about 250 people). I managed to get out of the water in 41 minutes.

I saw quite a few bikes still racked when I got to mine, so I must have done a good job on passing people. Now it was time to put all the biking I’d done in the past few months to work. The course was all hills, even when it looked flat it was usually a false flat, and was really a hill (I was told after the race that the total elevation climbed was 3500ft). I had fun and tried to keep

the pace that I planned on riding. I had a race plan and it was very tempting to ride faster or really push it on the up-hills, but I didn’t want to use too much and have nothing left for the run.

About 46 miles into the ride my back began to cramp—felt like some sort of spasm or something—making the last 10 miles really painful. By 52 miles into the ride, my only mind told me to pedal faster and get off this bike! My legs were getting a bit fatigued at this point, but my source of pain was my back, and then my feet started to bark a little bit, too. The bike did take a bit longer than I planned on it taking, but all in all I didn’t mind. I made it almost an hour before the cut-off time and was left with 4 hours to complete a 1/2 marathon.

After making it into T2, I felt an awesome sense of relief. I knew even if I walked the entire 13.1 miles I could do it in less than 4 hours. After a quick change of my shoes, I sucked down a melted snickers and set off on the ‘run’ or as I will call it, the ironman-shuffle. Ha! The hills on the run were non-stop and killer. Not one section of the run was flat. Since my feet were hurting, I took the first 1-2 miles in a fast walk/slow run. As my body adjusted to the run, I actually was able to do a slow trot for most of the whole 13.1 miles. I did walk on some of the up-hills near the end. At every aid station, I took in water and some Gatorade. I was constantly using the sponges to try and keep cool.

I had an American Flag with me that I had intended on just having in my pocket during the run, but since the sun was shinning bright, I decided to cover my shoulders with it. A really good idea since my back was already burnt from the bike ride. For as little as I ran in my training, I was a bit surprised that I was able to run most the race. I had this little voice in my head telling me, If I keep moving, I can place in my Age Group. I knew my competition and I knew where they were on the course, so I used this as my motivation. The run was an out and back—the way out felt like it was easier then the back. There were more downhills on the way out. The last mile of the race was all up hill, too, which made it a challenge. I saw quite a few people doing the ironman-shuffle out there; a lot of people looked like they were suffering! I made a good attempt at being a cheerleader on the run, encouraging people as we passed each other. I even saw one guy napping in the bus station.

king it up the hill and around the corner, knowing how close I was to the finish, I picked up the speed and let the joy of finishing this race take over my body. True to my fashion, I sprinted in for a strong finish, the flag held high above my head with a huge smile on my face. Later, I was pleased to find I had come in 3rd place in my age group. What a great first Ironman 70.3 race.