HomeEXPAT LIFEAuthorities Shutter HBC Fest but Musicians to Play: Show Must Go On 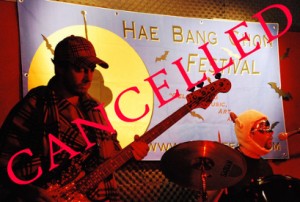 For now it’s gone and not coming back. The twice yearly Haebangchon Fest is no more. It was a hell-of-a lot more than the sum of its parts, and the first biggest part was its founder Lance Reegan-Diehl.   “Lance” has  F-5 visa status which in theory allows him to wheel and deal anywhere in South Korea just like a native born Korean. What he did with that status was set-up the HBC Music Fest by organizing local business owners into agreement for a one Saturday in Fall and one Saturday in Spring live music jamboree. From the sprouting up of the idea and for five successful festival seasons, “Lance” and a handful of enthusiasts did everything to make live music in the bo-ho yet rough around the edges neighborhood of Haebangchon a must scene. A destination street.

So how now is it not going to happen? The NSA– National Security Association.  The NSA (who call themselves “Foreign Handlers”) branch which is responsible for all of the Yongsan-Gu  area (which includes Haebangchon and the neighboring foreigner’s tourist zone, Itaewon) about three weeks ago began clocking Lance at his local music shop and then dropping in at the local VFW post to make a series of accusations and threats on the legality of the HBC Fest.  For a while, negotiations to continue the fest seemed to be full winded yet calm with the hope that the local NSA and fest organizers would come to an agreement.  An agreement about what? In name, noise and crowd control. The HBC Fest has been bringing more and more musicians and fest-goers into this neighborhood, nicknamed– Liberation Village— since the inaugural fest 5 years ago. At the last fest in May up to 5000 people were said to have shown up at some time of the all day ensemble.

With that many participants coming to do more than window shop money had to be a factor. And as anyone who lives in this neighborhood knows, the entire local businesses take a lot more of it in on Fest Saturday. Yet at first the money did not seem to be a breaking point. “Lance” explained how he rented his store’s music gear out to the venues that needed it and that all of the bands played for free. Any festival booty made from selling T-shirts went back into promotion and nuts and bolts cost. “Lance” disclosed to the NSA and the neighborhood venue owners that he’d take home about 1 million won (about 900 $) a fest; primarily from renting out the sound systems that the venues had to equip with so that the musicians could play. At this point the dots could be happily connected and a somewhat beleaguered win-win situation seemed to be close.

Then something snapped. The head of NSA for Haebonchon, “Paul” began to go around to the individual venues asking,

“Who controls the funds?”

According to “Lance” the same “Paul” then begun to phone-bully  him with repeated calls.  He was even getting called over the traditional Thanksgiving holiday of Chuseok, with NSA reprimanding him,

“This is not your garden.”

“How are you controlling the street?”

Wahid, the owner of Casablanca sandwich shop backed up Lance’s assertion explaining that the NSA who are supposed to act as neighborhood liaisons and not just “foreign handlers”  came into his shop several times and asked only about money. Wahid also put his finger on the fine point that,  “It needs to have a name like The HBC Fest or else people think it is just another hangout night.”

The VFW which has status as a non-profit also tried to step up and assure “Paul” that they would help tamp down the pedestrian noise on the street. The VFW has a good reason to see The HBC Fest stay together as the twice-a-year Fest helps them stay open to all members of the HBC community for the rest of the year. “Paul” from the NSA met with “Lance” and other inside members of the Fest team down in the VFW last week and the meeting was short with several bursts of commotion. The next day “Lance” started to receive more phone calls.

“If you do the Fest we can’t stop other government agencies from coming after you.”

The HBC crew sent this email out on September 15:

Hello to everyone that is looking forward to playing and hearing music.

We the bar owners have decided to go with a Happy Music Night for all of our friends.

Oct 7th – V.F.W. and Phillies host a music benefit show. Some of you will play at this event.

October 8th – Orange Tree, VFW, Phillies, and The Local will have Happy Music Night from 2 p.m. until 2 a.m. The rest of you will play at these independent bar promotions.

So you see there is no festival.

Just Happy Music Night in all your favorite bars.

We will have a schedule in our bars, and notify you through word of mouth and this email system.

The music of the night’s Night fest is still on for October 7th and 8th. That Friday and Saturday G.F.Y and Gorilla Productions present a “Happy Music Night” featuring the same performers at most of the same venues which are all in one way or another run by foreigners. The over-the-top title for that weekend is half pun and half play on words. With Korean pop music’s proclivity for sickly-sweet and always-smiling, the local venue owners and musicians seem to know exactly how to turn some nasty business into a get-your-hands-off-my-balls comedy: “Happy Music Night”.

A local musician was asked for his thoughts and declared his mind speaking with a graffiti tag line, “Stopped by The Ministry of Culture Repression and Racism.” There might be a lot of loud distortion in that line but maybe not. For the first time, this upcoming Fest was to be held in main venues that were owned and managed by foreigners. At previous Fests stretching back five years ago, the majority, if not all, of the venues were operated  by Koreans.  But over about the last year, The Orange Tree and Phillies had gone foreign, and, the newer and popular The Local Bar is kind of jointly owned and managed by an interracial couple.

The writing on the wall for the HBC fest to get snuffed by the authorities might have jumped out at last May’s version of the fest. But not because 5000 people attended and the crowds caused more than off-put  inconvenience to some residents. The last fest, gourmet burger joint Jacoby’s refused “Lance” from booking any music there. The Korean owners wanted the traffic of the fest, but did not want any musicians playing there. “Lance” wasn’t  too put off by that when it happened as Jacoby’s already had a sneered-at reputation with the local expats as: the home-of-the-44-minute burger. And even before last fest the table service to non-Koreans at Jacoby’s also began to get noticed by locals,

Lance believes that the former owner of Phillies. A Korean man in his thirties named “Y” had strong ties to the expats living in HBC and also with the authorities; so he was counted on to smooth over discrepancies. So with “Y” selling to a Canadian trio last year and Jacoby’s dropping out as a fest host it looks like there was a tipping point to foreigner ownership of the HBC Fest venues and without “Y” as “Lance’s” political point man it appears the NSA couldn’t allow that.

The expat musicians and bar owners now gearing up for “Happy Music Night” seem to have the wind knocked out of them a bit but they’re optimistic that the weekend will play out. Ga Young the owner at The Local who was sweeping the floor in beach attire that the Indian summer has kept both foreigners and Koreans wearing  let know,

“Yeah, we talked about the fest closing last night. I think maybe all of the people will still come, but I don’t know.”

I wonder on the October 7 and 8 weekend if the authorities will come looking for foreigners just to check their visa status? “Lance”, and as

some locals ironically call him, ‘The Mayor of Haebangchon’, doesn’t think so. He maintains an I’m-alright-Jack-you-get-off-of-my-back understanding,

When I walked into the student paper store on Haebanchon’s main drag it reminded me like it always does of something like a dusty 1970’s Korean DNA of an Office Depot. I bought the notebook used for this report from owner neighborhood veteran Jeon Hyo Sook. I enjoined to get her opinion about the fest. I expected she would just turn her head  away or even sound out the famous  hiss—the Korean raspberry–  to demonstrate how  she and the rest of her neighbors felt about  all of the foreigners living here and the HBC Fest itself. Instead she took the pen from my hands and drew a smiley face on a page in the middle of the new notebook. It was nice. On the notebook that is worth about 50 cents in any part of the world this one or next lay the small English tag lines that seem to be on every piece of swag that an English learner can use. It reads.

That’s nice too because it really is a long winding road we travel. And even with stagnate wages for foreigner English teachers making urban life in Seoul rather low quality, many expats living in Haebongchon are long-termers.  Perhaps they are only living a medium-sized dream that they can’t quite make happen in their own country, but nonetheless. And here maybe is the real rub between foreigners and Koreans on HBC Fest days. Some things are not about social standing or personal riches. A music festival is one of them.

PS. 3WM will keep readers in the loop on any changes on the status or schedules for musicians.