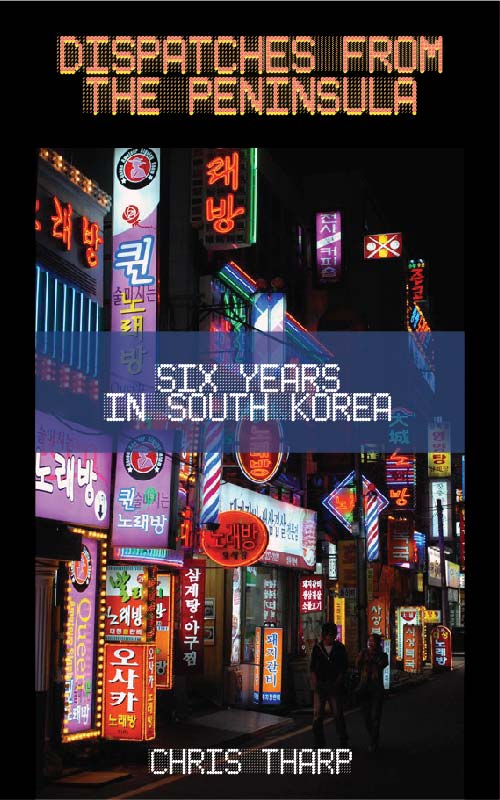 English in private schools that together make up one of the country’s largest industries. Korea, long isolated by culture and geography, with a complex language and set of social mores, can be a difficult place to call home. Chris Tharp has begun to make a name for himself as a travel writer, and in this gruff but affectionate memoir, explains why Korea can be both hard to like and hard to leave. He navigates his way through the timeless alleys and neon streets of Korea’s cities, painting a picture of a society that is at once ancient and utterly modern; he serves in the trenches of the English teaching industry, working his way from the private, for-profit academy to the university; he treks through the peninsula’s mountain valleys and rides deep into the country’s rural soul on the back of his motorcycle; he also explores the internal geography of Korea, from nearly being deported over a comedy performance, getting caught in the middle of a street riot, to staring face-to-face with North Korean soldiers along the DMZ. During this six-year journey, Tharp must also deal with the death of his parents, which forces him to ask the question: Is home a place that we’re from, or is it something we take with us wherever we go?

Tharp’s book can be further explored at Yahoo.

Read an excerpt from the book below:

My first Korean relationship was a short one. Miss Kwon and I called it quits after only about two months. It was a fun time but the proverbial spark was never really there. We both realized this and broke it off amicably, over cold beer and a sausage plate at the White House, a palatial Korean-style drinking establishment, complete with blue lights, gothic pillars, and a five-piece Filipino cover band. We finished our drinks, shook hands, and walked out of each other’s lives.

However, it didn’t take long for me to meet a new girl. I was drinking one Saturday night at a dingy little bar aptly named the Box, run by a long-haired Korean hipster named Sang-ook. As I staggered out into the now-frigid November night air, two pretty Korean girls—one tall, one short—stood in front of me. The tall one spoke up:

“My friend think you handsome.”

She gestured to the short girl, who stood there beaming a lippy smile and blinking her rather large, darkly made-up eyes. She wore a black coat, checkered skirt, and furry boots. She was adorable—painfully cute, really. There was no way I could resist such concentrated sweetness. So, I responded: “Well, I think she’s very beautiful.”

Her tall friend translated. The short girl smiled and blinked some more.

I bent down and gave her peck on the lips. And so I acquired my second Korean girlfriend.

Her name was Bo-ra, and in the several months we spent together, I learned very little about her. I knew that she lived with her sister near the university, and that she really liked dogs. She liked them so much that she once insisted on going to a dog café. This was an actual café that also doubled as a kennel. These are found throughout the country. You go there, admire and pet the pooches, and drink coffee and eat pizza, all the while taking in the sour aroma of dog shit. Not my idea of an appetizing time, but Bo-ra loved it. She was cute and she adored anything else that was cute.

I was reasonably happy at first with her, but there was just one little problem: she spoke no English. She knew a bit—some basic words and phrases—but actually carrying on a conversation was totally out of the question. This was only a few months into my first year and I was incapable of anything but the most rudimentary Korean, so it seemed I was in a pickle. I had gotten myself into a relationship with someone I couldn’t talk to. All of that lying in bed with your girl and talking about your fears, your loves, your hopes, your dreams? That was all off the table, along with everything but physical contact.

This situation is not so rare with mixed relationships in Korea. Many times I hear   guys on the phone with their Korean girls, bellowing at them in condescending baby talk:

Brian Aylward, a Canadian standup comedian who spent three years in Seoul, describes it like this:

And he is right.  No doubt they feel the same way about us.

I had nothing in common with this girl. She would come to my apartment and watch Korean TV programs, or spend the whole night exchanging text messages with her friends. Mostly she would just sleep, though. The only thing she liked more than dogs was sleeping.

Like many Korean girls, Bo-ra was a master of the text message. When tapping out a message, her fingers were the very model of dexterity. They would drum and whir over the touchpad, reminding me of Clark Kent typing at the speed of light in the original Superman film. She sent dozens to me a day. It was only after our first day that I received this one:

I’ve been in relationships for nine months without ever uttering or writing those deadly three words, but that didn’t stop me from reciprocating her message two minutes later. I was lying, yes, but I suspected that she was as well.

Her text messages were usually part English, part Korean, and part symbols, more often than not that strange mix of eyes and mouths known as emoticons. Korean girls are experts at employing the various symbols on a cell phone keyboard to create an amalgamation of accentuations, moods, and emotions.

Her messages employed more of these bizarre symbols as they went on. I began to get lost in them. It was like trying to decipher some strange Korean girl hieroglyphics without the text message Rosetta stone.

The last message I got from her contained no symbols at all. It came in at five a.m. and contained just the following six words.

chris i sorry we have breakup

I tried calling for a whole week afterward, but she never picked up. She was ending it and that was that, my persistence be damned. Even if she chose to respond, I wouldn’t have understood anyway, so perhaps it was for the best.