HomeFrom the SceneCan’t You Hear Me Knocking? Donald Kirk on China’s Refugee Dilemma

By Donald Kirk for 3WM 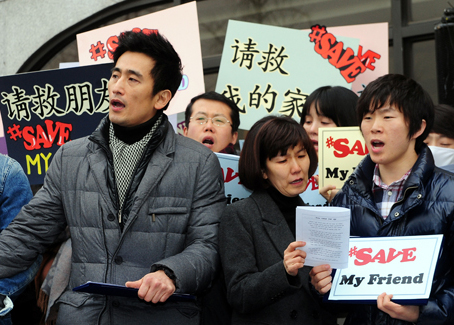 ​The Chinese by now must be getting the message. How long can they pretend not to hear the shouting and singing from all those people on the steps of the church across the street from their embassy around the corner from the Blue House and the Gyeongbuk Palace in central Seoul. Don’t tell me that row of police buses lining the street in front is blocking all the sound waves.

​Ok, granted I didn’t see any windows opening in the beautiful modern building to which the Chinese moved their embassy from the historic Myeongdong site, now under construction as a much bigger, more modern establishment. Nor did I see any sign of movement in front of the embassy or inside the glass windows.

​Still I’ve got to believe the Chinese are quite aware by now that sending poor bedraggled North Koreans, who’ve swum or walked or paddled across the Tumen or Yalu Rivers into China, back to North Korea is really a bad idea. It’s not just that the Chinese look like cruel collaborators with an oppressive regime. The problem is they look so dumb, so unhearing and downright inhuman.

​The Chinese have been looking that way for years when it’s come to what they choose to do with North Korean escapees. This time, though, they’re encountering more pressure than usual thanks to Web sites like Daily NK that pound them with reports on what’s happening in North Korea and what they think of China’s policies, and thanks to groups like #Savemyfriend, with the syllables run together after the hash mark for the benefit of all the Twitter users out there.

​The Chinese have their reasons, to be sure. The obvious one is they want to get along with the North Koreans, who are trouble enough begging for all that food and fuel and never paying anything back and then upsetting the equilibrium with South Korea with all their mad rhetoric – and the occasional nasty “incident.”

​Another reason is the Chinese think they have enough Koreans on their hands already. A whole region of China, above the Tumen River border, is essentially Korea-stan, albeit under a different name. They’ve got a minority of potentially restive Koreans, and they don’t want still more of them making trouble on their northeastern frontier, far from the center of things in Beijing.

​As a matter of fact, the Chinese are so worried about their Korean minority that they really don’t look too hard when North Korean defectors hide out among them. True

​enough, the Chinese are holding a few score defectors while wondering whether to return them to the North Koreans, but the grand total of North Koreans in China is widely believed to be about 200,000.

​Most of them have figured out ways to survive, working in farms and factories, doing menial jobs, often for Korean-Chinese who aren’t always so nice but at least can talk to them in their own language.  The women lurk in the shadows of the numerous massage parlors and “barber shops” that have sprung up in every town or fall into marriages, per force or not, with Chinese farmers in a society that’s getting short of women thanks to ultrasound testing and abortion of female fetuses.

Some of these North Korean defectors go back and forth across the Tumen, a narrow stream that ices over enough to walk on in winter and is shallow enough for wading across in places the rest of the year. A whole sub rosa cross-border trade goes on, people paying off to guards and low-level officials on both sides of the river. The Chinese have to know what’s going on.

All of which makes the concept of joint North Korean-Chinese teams coordinating in pursuit of defectors look a little like a cover story for a much bigger racket. How interested are these people in catching miscreants, or rather defectors, or more properly refugees from famine, starvation, disease and a legal system that still consigns offenders to the gulag, to prison terms that end only with death from hunger, torture, overwork, illness, execution?

The ones the North Koreans really want the Chinese to get are not the cross-border wheeler-dealers, or the young women sold into sexual servitude, or the men picking up gigs in factories and workshops. It’s those who seriously want to defect to South Korea, or some other more hospitable place, that they’re after the most.

The fear is the penalties for escapees will worsen during the period of mourning for Kim Jong-il. The actor Cha In-pyo, star of the movie “Crossing” about the tragedy of a North Korean family, has said that mourning period is the reason the latest defectors, if sent back, “face death.”

The North Korean government, said Cha, “has officially stated that during the mourning period for Kim Jong-il, if defectors are caught, punishment will be given not only to the defector but also to three generations of their families.”

In other words, he went on, if the Chinese go ahead “with the repatriation of the defectors, it will mean not only the death of the defectors themselves but all of their families as well.”

The Chinese can’t go on turning deaf ears to all these pleas forever. They do too much business with South Korea. Too many South Korean companies have factories in China. The relationship with the South is far more productive than that with the North – though the North forms a barrier against historic enemies, Japanese or American.

North Korea, moreover, is also a great place for the Chinese to exploit in search of mineral wealth and also in quest of a route to the Pacific via the port facilities of Rason at the mouth of the Tumen on North Korea’s ten-mile stretch of border with Russia.

Such considerations, however, only go so far.  A protest that I attended began with a rousing rendition of “You Raise me Up” and ended with “Cry with Us,” the latter in Korean. Those are fine songs. When will the Chinese open the windows of their embassy and listen? They might enjoy what they’re hearing.