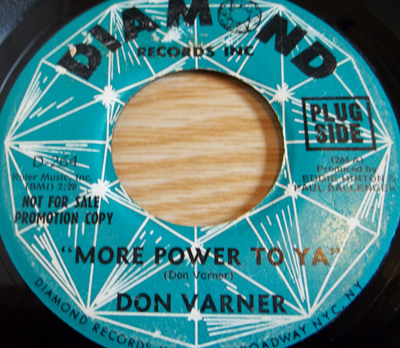 Many years ago I vaguely remember walking into a record store and purchasing an album titled “More Power To Ya” from Charly Records (see photo), a UK record company that specializes in reissuing soul, rhythm and blues, and jazz. I bought it on a whim—it must have been cheap—because I had never heard any of the tracks before. So I listened to this record a few times and then filed it in my collection. At the time, I wasn’t even interested in collecting soul and funk 45s like I am now. But one of the tracks off that album, Don Varner’s “More Power To Ya,” had a resonating effect on me and I never forgot it.

A few years later, when I became more interested in collecting 45s, I found a copy of this 45 on Ebay and had to have it. While the 45 was issued on the Diamond label out of New York City, the song itself comes out of Muscle Shoals, Alabama.

You wouldn’t think it, but Muscle Shoals has had a rich tradition in music and recording studios that started back in the 1960s and continues into the present age. Just about everybody who is anybody from the music business has recorded there at one time or another, from Wilson Pickett to Aretha Franklin, from The Rolling Stones to Bob Dylan. All of this musical significance is pretty amazing for a city that boasts a present-day population just short of 13,000.

If you desire to dig deeper about music in Muscle Shoals, while trying not to sound like a tourism representative for the city, you can check out Fame Recording Studios  which started way back in 1959 and continue to this day; or see what Sir Shambling has to say on Sir Shambling’s Deep Soul Haven South Camp labels and studios that were a local operation for a number of years during the 60s and released many 45s that are prized by collectors.

So “More Power To Ya’” was a Muscle Shoals tune released in 1969. It has that mid-tempo southern soul flavor that we associate with the region. If you are familiar with Stax, for example, you recognize the similar sounds, with the emphasis on the horn section and the keyboard carrying the melody. A fine tune, overall, and one that was written by Don Varner himself. Listen and enjoy!