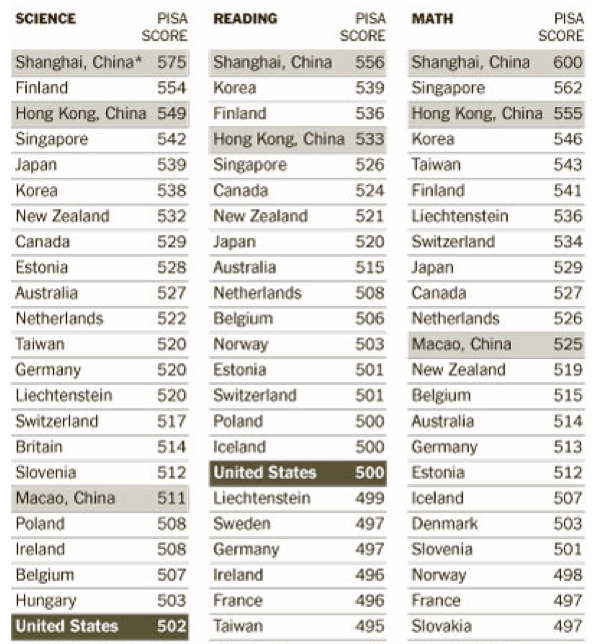 In 2009, Shanghai was just another one of the 65 schools participating in the world wide scholastic test known as the Program for International Student Assessment (PISA).  The 15-year-old students took on a daunting test measuring their ability in three subjects.  Shanghai’s reading scores were well above the 493 average with a 556 and blew the competition away in math by yielding a score that surpassed the world average by more than a hundred.  The Shanghai school system has found itself at the forefront of the PISA results, ousting math and science powerhouses South Korea and Finland.  Their success came as a bit of a shock to the rest of the world and is a definite testimony to the growing significance of China and more importantly Shanghai.

A little over 5 thousand 15-year-old boys and girls are chosen as the population sample for the test.  The test is given every three years to participating OECD countries.   Shanghai jumped up from out of nowhere as they weren’t even near the top in 2006. The scores are impossible to ignore and have left various nations including the USA acknowledging that Shanghai’s students are the ones to beat.  In fact, the impact of these test scores has led some to call for the immediate reforms in the school systems in their respective countries.  The book “Surpassing Shanghai” highlights their novel success while calling for tougher standards within the American school system. The USA did not do well on the last PISA test and education reformists fear falling behind the rest of the world.  There’s also the fact that the United States’ cross-pacific rival has found themselves in the PISA limelight.

How they did it

​In the American media, education professionals cited China’s leading industrial city as having an “obsession with tests”.  This obsession, according to the Washington Post, focuses on the end result of a course and the numerical test score that goes next to a given students name. Yet, it’s not clear that calling a city and their 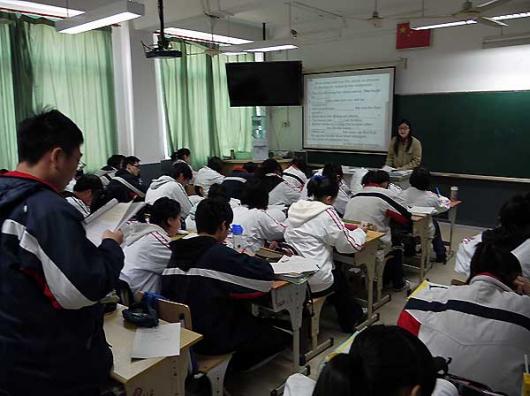 teachers obsessed with tests stems from a bias or is a well thought out critique.  Other experts, such as professor of psychology James Stigler, say it’s because of the work ethic. There’s an old Chinese saying ,“it’s not how clever you are but how hard you work” and as an educator at an international school here, I can tell you that after studying all day and sleepwalking through their evening supplementary courses, there is very little time left in the day to do anything other than to eat and sleep for your average student. Stigler goes on to say that Chinese students “ not only work harder, but they attribute their academic success to their own work.”  So, a student without a decent work ethic is rarely if at all championed. Associate Dean for Global Education at the University of Oregon, Yong Zhao, sized up China’s culture and their success by stating “That’s the secret: when you spend all your time preparing for tests, and when students are selected based on their test-taking abilities, you get outstanding test scores.”

​This is not to say that the students are the only ones to applaud.  A recent finding by OECD shines some light on how serious Chinese students and their parents are about getting high test scores.  The study points out that 80% of Chinese students also “attend after-school tutoring.” So it’s easy to see that work ethic and a penchant for plug and chug subjects such as math and science have given Shanghai the edge.  Also of interest is Shanghai’s approach to hiring and nurturing teachers.  In fact, they place their bets on expert, experienced teachers and on careful training of their new teachers. They rely on well-planned, consistent support of teachers to improve their schools continuously.  This approach towards their educators and development has earned Shanghai the title “a leader in reform” according to the PISA report. ​Whether Shanghai’s success story is a one time deal or the beginning of a dynasty, the rest of the world has felt the tremors of their recent academic success.  With a new PISA test looming on the horizon for 2012, Shanghai will be in a position to establish the potency of its education system. However, should their scores fail to match their 2009 results, their critics will gain a new foothold and the supremacy of Chinese students will be anything but a fact.