‘Hello, do you know the Jesus Christ?’–Meeting People in a South Korean Gym

I recently changed gyms. The gym that I used to frequent was fairly close to my house so it was quite convenient. Due to the relatively small size of the gym, I had to plan my workout times carefully to avoid the morning, noon and evening rushes. I also found that I was accosted frequently for spur-of-the-moment English lessons, which has started to bother me more than it initially did during my first few years in Korea. After all, I doubt that stock brokers are as frequently stopped on the street and asked for free investment advice. In addition, the crowd at the old gym left a lot to be desired. The main clientele were mostly ajummas on the wrong side of 45 sporting almost exclusively leopard print spandex workout suits.

The new gym is about nine subway stops from my house. This allows me to wake up a bit before arriving at the gym. It also allows me to leave my area and workout in an area that is predominantly occupied by young people. The scenery at the gym has improved by leaps and bounds, and I have yet to be accosted for free English lessons while trying to work out. I wake up at 5 a.m. every day and head to the gym at 6 a.m. I arrive around 6:45 and begin my stretches.

The new gym is on the top floor of a large building and the crowd is sparse at 7 a.m. on a weekday. Last Friday, I’d done my usual routine when I noticed an unusual man staring at me. Again, I attract these types of situations and I don’t know why. His stare went above and beyond the usual “shocked to see a foreigner” stare. The man was approximately 45 in age, with white hairs peppering his otherwise conservative black mop. The look in his eyes and his general vibe screamed out to me “possible mental issues” and I decided to avert my eyes from his stare, as often times making direct eye contact encourages the other party to approach and initiate conversation. 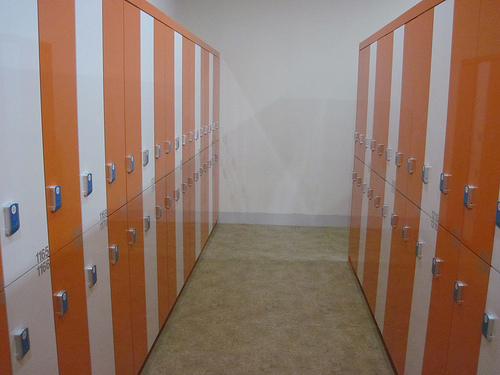 I do my best to blend in and avoid these types of uncomfortable situations. I wear the same clothes as everyone else in the gym, and usually wear a baseball cap while listening to my iPod. I also wear a hooded sweater with the hood pulled over my head. I avoid eye contact and stare out the window while doing cardio. This combination should be sending a clear message of “don’t bother me” to others around me at the gym.

The slight man with peppered hair didn’t break his stare, so I changed machines. After my 50-minute workout, I headed off into the shower room and locker area to shower and change back into my street clothes. After having showered, I sat on the bench getting dressed. I felt a tap on my shoulder and I instantly knew who it was going to be. I turned around to find the middle aged man standing completely naked about 12 inches from me with a large smile on his face. Being that I was sitting down and he was standing, my head was actually about 12 inches from his penis when I turned around. I immediately stood up, re-shuffling my mental deck of cards and deciding how I would politely but quickly escape from the current situation.

The man then said “Hello, do you know the Jesus Christ?” Oh man, here we go again. Why am I a magnet for this type of thing? Why can’t I just live my life in polite anonymous non-observance? Instead of talking, I simply shrugged my shoulders in the universal “I don’t understand what you’re talking about” gesture. He replied with “Do you believe in the Jesus Christ?” Again, I shrug and perfectly reproduce the puzzled look that Korean girls are so famous for.

Without pause, the man continues “Do you like a gospel music? I like the Eric Crapton. Do you know a song ‘Tears in Heaven?'” I smile and shrug, after which point the naked 45-year-old Korean man standing 12 inches from me breaks out into his best rendition of “Tears in Heaven.” He has no towel in his hand; he has no towel around his waist. He is as naked as the day he was born, and he is serenading me with this 19-year-old song. I wonder if he knows the significance of the song. On the album cover for Clapton’s 1992 hit single, he eerily resembles a modern Jesus holding a guitar.

I hastily dress and excuse myself from the changing room. Others around me did their best to ignore the “naked man singing to a foreigner” scene that was playing out in front of them. It looks as if I may have to change gyms again. I will keep going to the new gym but if the unpleasant encounters continue, I will alter my workout schedule. For the love of God, can I please just workout in peace?

The Expat has been in Korea for eight years. He is married to a Korean woman and has no children. He used to teach English but now works outside the ESL industry. The Expat likes to bitch and moan about day to day life in Korea. Most of his writings consist of commentaries on life in Korea and being married to a Korean person. The Expat is famous for writing 3000 word posts about various aspects of life as a foreigner in Korea. Read more from The Expat at expathell.com

Funky Seoul Corner 15: Dee Edwards’ ‘You Say You Love Me’