HomeFrom the SceneThe View from Okinawa–Donald Kirk on the U.S. Military’s 21st Century in Asia

OKINAWA, Japan – Ask just about any of the 18,000 or so U.S. marines on this battle-scarred island prefecture what they think of demands for shutting down the marine air station in the town of Ginowan on the west coast, and they say they know almost nothing about it. Nor are they aware of the daily headlines in Okinawa’s two daily papers, the Okinawa Times and Ryukyu Shimpo – the latter name a reminder of the legacy of the Ryukyu kingdom that succumbed to Japanese rule in 1879.

Marines I talk to have better things to worry about than criticism of the U.S. bases – like which bars offer the best music and when’s their next deployment to some potential hot spot. The neon signs over the little bars and eating places in Kin Town midway up the island on the west coast, beckon marines like bright lights attracting moths to flames. From an old-time camp across the highway that runs up the eastern fringe of this island bastion of American military might, marines hit bars with names like “Howler’s Karaoke” and “White Kitchen” and “Rock America” in between “deployments,” as they’re called, from Southeast Asia to Afghanistan.

The scene is not much different from those outside American bases in South Korea. Like U.S. troops in Korea, those on Okinawan bases from the north central coast to the port of Naha in the south are told to be polite, stay out of trouble and avoid fights among themselves, much less with civilians. In a time of deep questioning about the role of U.S. forces, the thought of a serious “incident” – a rape, an assault, a murder – is a recurring nightmare.

That’s because the future of the U.S. armed forces is under the most intense scrutiny in Asia in a time of rising opposition to their presence, questions about their basic necessity and contradictory worries about defense of the region. It’s as though U.S. forces on Okinawa, including both the marines and the air force, were fighting a new war for survival 67 years after defeating Japanese forces dug in here in the worst battle of the “Pacific War.” The battle this time is a public relations and political contest playing out against the background of rising concerns over both China and North Korea.

The marines are more or less oblivious to the debate though they occasionally hear or read about it. For that matter, local shopkeepers and restaurateurs don’t seem too concerned either. Protesters and politicians may rail against the presence on this island of half the 47,000 U.S. troops in Japan, but people here get along fairly well with the marines. Some say the marines these days are better behaved now than they were 10 years ago – a result of regular curfews, insistence that marines go out on the town in twos and threes, never alone, and community relations programs like cleaning the streets and nearby beaches.

None of these gestures, though, compensates for the sense that U.S. forces here, as in Korea, are in the midst of a transition with consequences that will reverberate down the 21st century. The Americans are under pressure to move most of the marines on this island to bases elsewhere and to close the marine air station in Futenma, midway between here and Naha, the capital. You just can’t get away from the fact that that base is in an urban area, that the noise of helicopters taking off and landing is a nuisance and the protest is going to reach a crescendo if and when the marines this summer bring in the new Osprey, the aircraft that takes off like a helicopter but flies like a plane after the propellers change from vertical to horizontal.

The protest is going to be enormous, and it’s going to get worse if construction begins in this relatively unpopulated area on a new marine air station near here to replace the one at Futenma. The story is a familiar one. People may want military security but don’t want bases occupying valuable land, messing up the environment and bringing in troops who may or may not be all that polite and friendly. Okinawans ask why can’t most of the U.S. forces here move to the main Japanese islands. The answer, as everyone knows, is no way are they wanted anywhere else either.

The cold shoulder given U.S. forces raises the question, are they needed? Few people, maybe no one, thinks war will break out in Northeast Asia any time soon. North Korea may make unpleasant noises, but who thinks the North Koreans are really going to fire off a missile, much less a weapon of mass destruction, at Japan? And is China going to jeopardize its 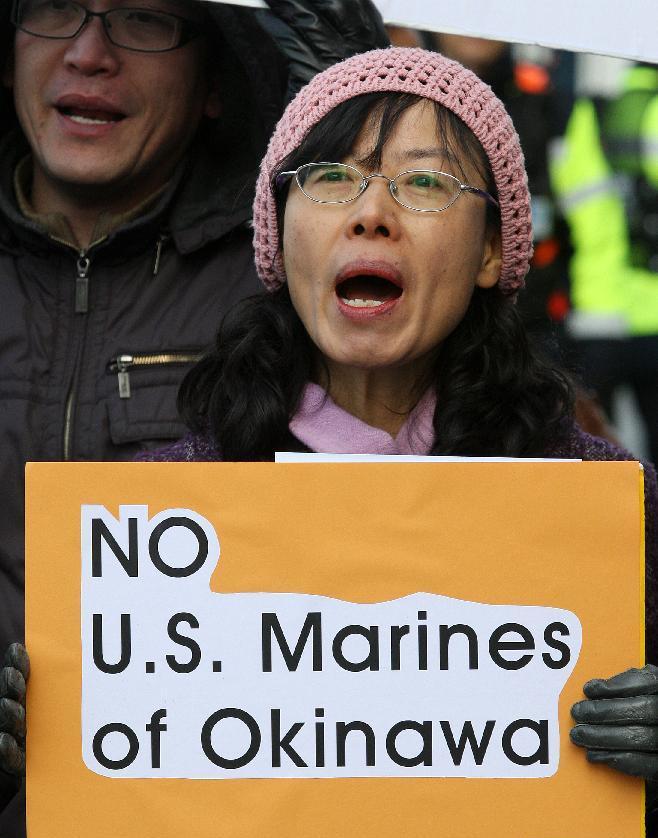 vast trading relationships with the U.S., Japan and South Korea all for the sake of the tiny Senkaku islands well south of here? The worst-case scenarios may happen, as they have in the past, but you would have trouble convincing people of any crying need for concern.

Okinawans have much in common with Koreans. The last thing anyone seems to worry about on the streets of Seoul is the specter of North Koreans staging a new attack across the demilitarized zone. Nor does anyone think that China is about to attack South Korea. To most people, withdrawal of U.S. ground forces from South Korea and removal of the U.S. headquarters from Yongsan is not that big a deal.

On the streets outside their bases, marines talk about exercises in exotic places like Thailand and the Philippines, war games in South Korea, long spells at sea and jungle training in the northern reaches of this island. A few barkeeps tell intruding marines they’re for “members only,” meaning no marines, but such rebuffs are no big deal either. If no one thinks war is about to break out, no one here really thinks U.S. forces will have to abandon their historic bases.

He has spent decades covering U.S. forces in Asia and currently is on the ground in Okinawa.