I live on Street 282 Phnom Penh. My apartment is a third-story frontal walk-up; the 38 spiral stairs all outside. If you ever wondered what it was like to get up and down in a firehouse, after a week on these stairs you would know. I’m just above Linn’s 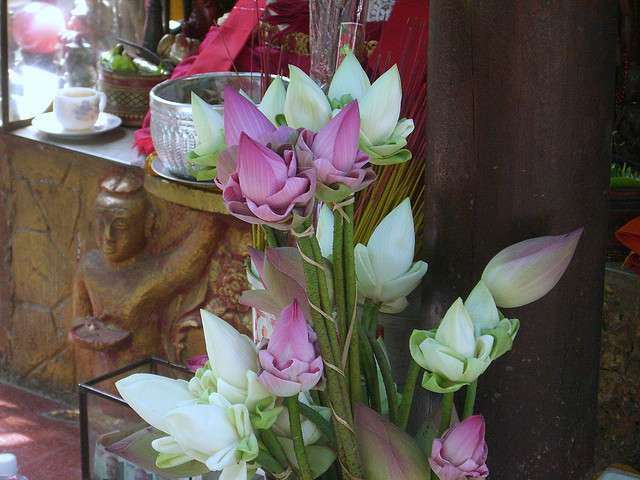 Shocking Pink Tailor; which is very popular with ‘the Penh’s’ mostly female NGO foreigners.  A real ( not a knock off) Solex padlock keeps any two-legged intruder out and the gecko-lizards keep out the millipedes. My newly renovated one-bedroom is pristine. The inside colored with peach cobbler walls and large tile floor slabs laid out firm to stand up to anything and most specifically not to absorb any seeping in rain water. In the kitchen is a giant steel indoor water vat for backup in case the water supply fails, but I threw the fuzzy teddy bear that was gifted to me into it by mistake. Hanging on the front room walls are the pink and red plastic flowers that came with the place and I have kept the hot pinks and bright reds in their original place in order to avoid any curses. There’s a TV with 60 channels of free-cable coming from places as random as Vietnam to Berlin and the tiny water closet toilet is the smallest room I have ever entered in my life.

Shortly after sun breaks the pavement, cafes open and every morning the monks with the saffron colored robes are in front of my building with a steel container cupped in hands to accept large ladles of rice as their alms. Every business on 282 seems to take part including the owners of my abode, the Cheam family—seven I have counted—and they all sleep across the living room floor each with their own mat. They’ve opened their first floor as a PC gaming room. It is always crowded yet it seems odd that  it is not an Internet café, but then 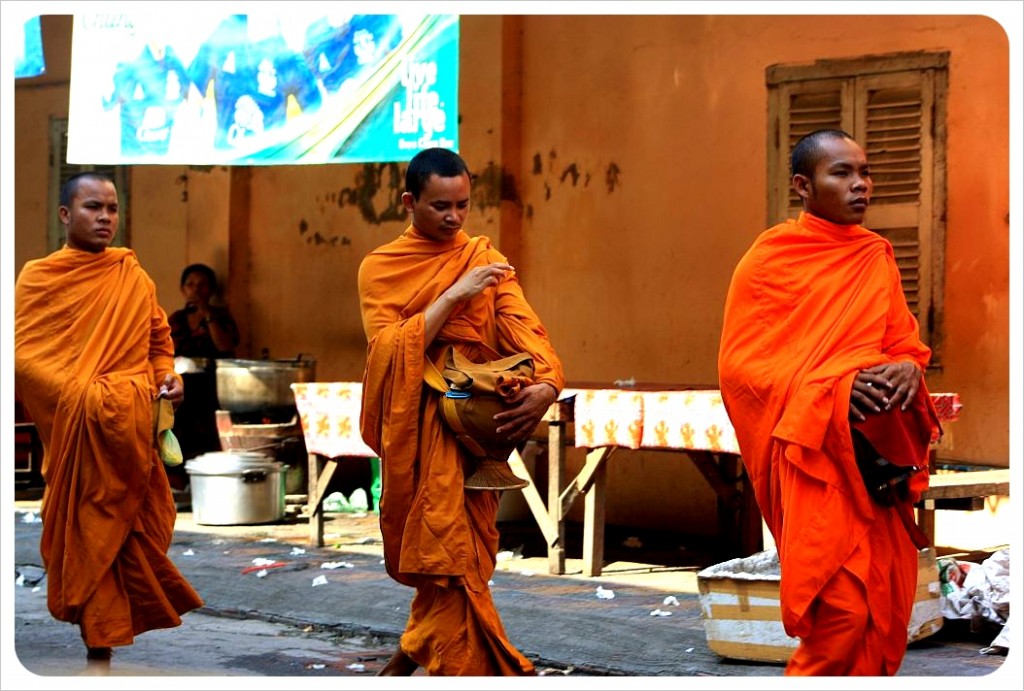 again the Internet is so expensive here ($50 a month may get you dial-up). There are small spirit houses in every structure in Cambodia. I  have not placed one outside in the corner on the porch yet; I’m not trying to belittle the tradition; instead I’m still pondering an answer to the great 21st century question any white man living on their own in Cambodia has to ask,

“Can I survive without air-con”?

My 300 meter block of 282 lies in the shadow of “42 Building”, and sits between the busy as a one-legged man in an ass-kicking contest Monivong Blvd. and 63 street, which when not under construction, will casually take you downtown to the Central Market or uptown to the historical Russian Market. After three months I have no molecular knowledge of “The Penh” yet, but it’s coming. I am waiting for sundown. At about 6:20 p.m. this place will blow. On most nights, uncannily exactly at sunset, St. 282 opens up with the force of a popped zit and then blooms into an enchanted tiger lotus.  The sun and the heat ease up and the bewitched skies fill with a strange combination of pigeons, swallows, bats and dragonflies. At sunset, even the heat drained and flea-bitten tuk-tuk drivers sit up 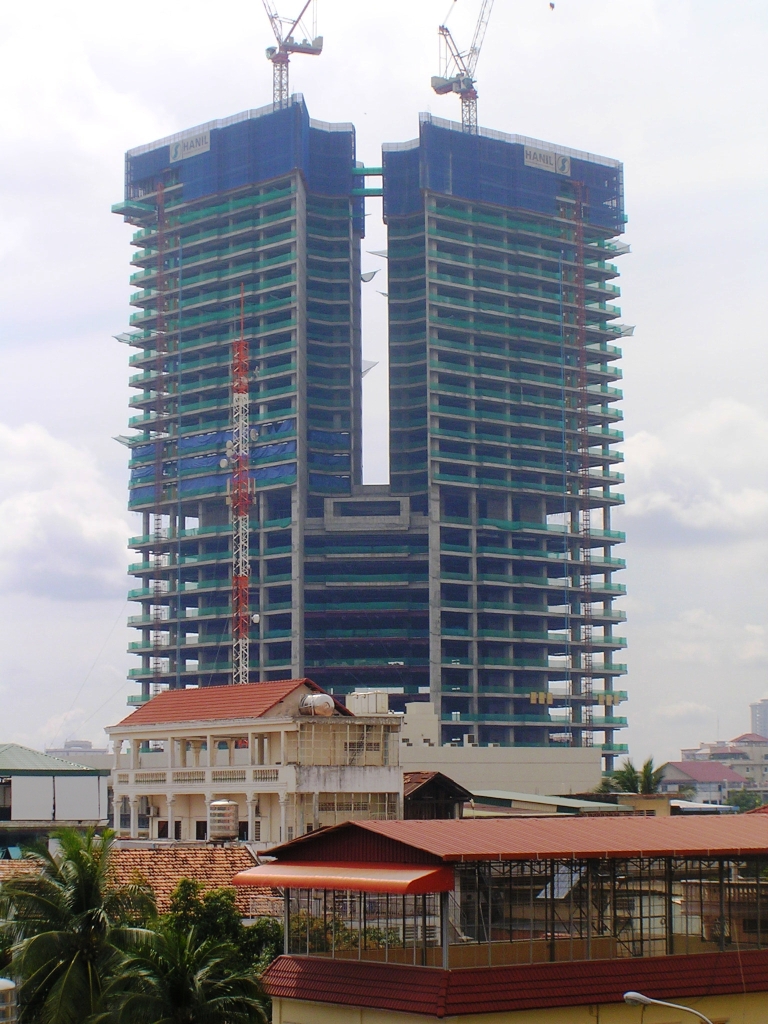 straight. They are part audience, part chorus, part prop as they let it all play out. On the other side from the tuk-tuk’s in front of no. 40 house is Rina’s stall. Her giant red ice box cooler can’t be used as a play surface for kids right now as it is jammed open and the Anchor beer cans are offered to anyone of age. Right below my place the ice cream truck hymns are playing and the squeezing of the rubber ducks signal that the three street-food stalls have lined up. All the gamers have broken their personal player to player trance and have come out of the Cheam’s game café with other regulars to ‘noodle’ on the street. ‘Goy teav’ are the thin white noodles similar to Capellini Siciliani, and ‘Me’ are the yellow noodles that clump together. Seventy-five cents for a bowl of either one and the taste leaves nothing to be desired.

On St. 282  the kids don’t need prescriptions. This is not a local population on Xanax. There are ruthless dangers lurking for them for sure but now it’s flip flop casual or pink tennis shoes strewn casually like on a living room floor. There is an imago flashback quality to this hardtop; some deep urban imprint. A 1960’s street corner drama being played out…

Even if you close your eyes you can feel it: images of sneaker’s tangled high above the streets on telephone wires… Fire hydrants cranked open and kids splash-bathing on the sidewalks…  And floating past all the rigging on the street are local Khmer and transplanted Korean and Chinese girls strutting with a you-can-look-and-you-better-worship posture. Of course I worship but have my own role to play when 282 goes party rocking. I oversee from the porch and then interlude to the kitchen in the back and start banging frozen squares of ice cubes on the indoor steel water vat—which I notice for the first time is spray painted with “Reservoir 1500” on it. People look up at the window and then they know. With drink back in hand, I can resume on the porch and look below at the waving paraders. By 8:30 it’s dark, the food stalls have moved on and the West Side Story drama shutters-close like a snap dragon.

This street is part of Phnom Penh’s expanding BKK 1 neighborhood otherwise known as:  ‘NGOvilla, The French Foreign Legion, The new Spanish Armada.’ I am not sure what this NGO phalanx is really accomplishing here or if they believe themselves to be the “Royal We” and everyone else a so-and-so. It’s probably unfair to tab them as eminences of self-regard. Besides, Phnom Penh is too  unlit, too dangerous, everyone is surviving in randomness. Class aspirations, six-figure stipends, on the guest list for Holly Golightly’s Amnesty International gig: forget about it. The best of us don’t lack intentions; it’s just necessary to literally see what’s right in front of you. I’m always struggling to see what’s in front of me and of course what’s coming around the corner. Like I said three months in the Penh does not equal molecular knowledge of the place, but last night I survived my first head over the handle bars bicycle accident. Sixty-three street was shut so I broke right onto Pasteur Street and my front wheel snapped into the drain and then the human catapult. I wasn’t wearing any helmet at all and to live outside the law you must be honest… so after getting up from the wipe out and Khmer people telling me, “You’re Ok, You’re Ok.” Well, it was one hell of a rush finishing the cycle to the Sponge bar on Rue 51. I don’t know much about post-colonial attitudes but at least the French gave ‘The Penh’ a lot of cool street names.

I HAVE TO CALL HIM JOE

Many expats living in Phnom Penh come across not as they were born to run but more accurately as born to lose. It’s hard to guess how many of the men living here are just on lifestyle support. Meaning they can always pay for the Chicken Cordon Blue on the menu and buy a woman anytime they want. There is some free-spirit to the predominantly male long-term expats here,

But then Jefferson at the Sundance Inn maintains, “You can never trust anyone from the country of, ‘Penal Colony Surplus.’”

The quip so far that best describes retiree expat men in Phnom Penh comes from Arkansas Henry at The Equinox bar one block over on Street 278.

I met Joe upstairs at a popular bar in one of the red light districts. He sensed I was a fellow American and wanted to talk about his life here. “Joe” isn’t his real name of course. He explained he was going to rent a place close to 282 and that he was on his second wife and that his diabetes medicine costs $13 a month in Phnom Penh but $204 a month back in the States. He limped down the stairs to sit at a bar he was noticeably comfortable in. For the next couple of hours he sips Coke and explains amongst other things that buying a leg in Cambodia is cheaper than in Switzerland, and then he breaks to me what he assumes will be shocking news, 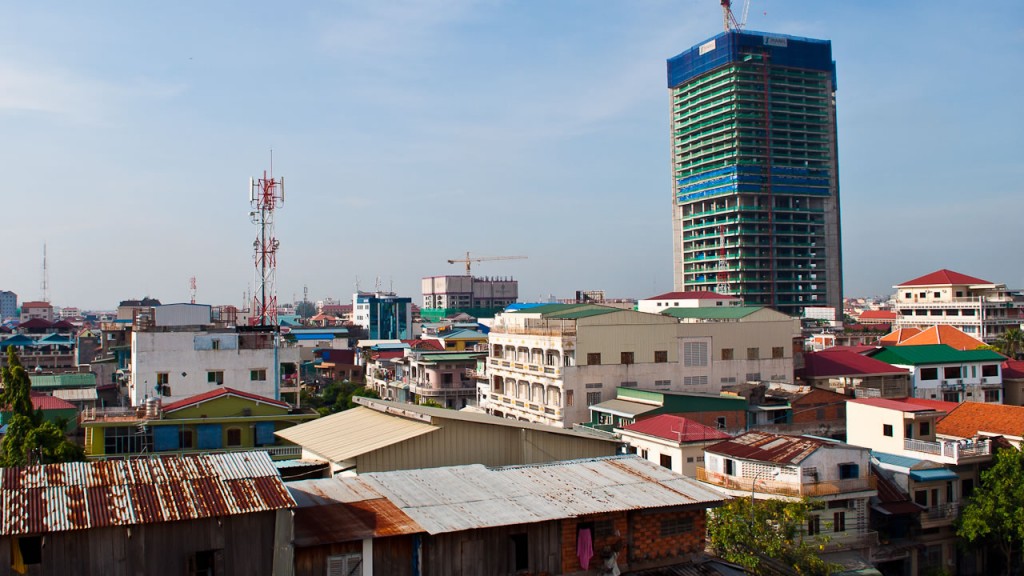 “Any of the girlfriends you’ll have here have no brain,… there’s no real expectation. No give and take.”
Upon reflecting he realized that it was his second wife’s mother, his mother in law, who actually warned him about his current wife.

“I know it sounds absurd, but generalization is about the worst way to go through life out here and it just ends up making you silly. Yeah, she married me for the money and to have a western father for her child. My daughter’s name is Paula Ann and my wife kidnapped her. It’s gonna cost me about 200 bucks to get her back, but I already paid the local police and they tracked her down on  GPS. She’s out in the northern provinces by Battambang. My parents know all about it and when I get Paula Ann back we’re going to live in the States maybe DC, where I’m from or eventually in LA.”

STUDENTS THAT HAVE THE ANSWERS

Kidnapping is a trending business strategy in Phnom Penh. The growing middle classes are having their children become targets for ransom. When I ask students about the rampant security guard presence at school they all are on key exclaiming the word “Kidnapping.”  One student who nicknamed herself “Marydeath” struggles to express what she feels but then,

“The Gangster wants to kill you for the kidney!”

It is tempting to deduce this as high school students with dripping hormones crying wolf, but there must be something there.  For one thing the fatalism of Khmer high school students is chronic. They explain it doesn’t matter what law you break or how you abuse people, “You can buy yourself freedom.” Nor does it matter in their own formation of thought if they study and learn. They just have to bribe the Cambodian proctor and they can cheat anyway they want during any national exam.

“If you have money you can get in to any school,” Vuth, a skinny whip-smart 17-year-old senior explains to me. To a teacher it seems like a hallucination that students can slip an administrator 10 bucks to pull out a packet of notes and apply them to standardized tests. So I talk against it but,

Half of my high school students drive cars–Lexus is the trendy status maker–and half of those (at least the males) carry a gun in the car—“To protect from the gangster attack,” says Vuth. He drives a 2011 Camry where he keeps a pistol in the glove compartment.

In class the boys love to talk about cars, and the girls Korean Pop-stars. When The Khmer Rouge wiped out the trained citizens and the bookish types of former Cambodia, well maybe it takes  some time for people to take an interest in anything that isn’t noisy. Another gregarious student, “Tornado,” loves  ultimate fighting and tells the girls at least once a day, “K-Pop is pure evil.”   There’s a certain whip-it-up vibe in the class. On Friday afternoon I say have a good weekend and they return fire, “Have a nice nightmare.” There is obviously much more to say here and better more thoughtful ways to say it. But it’s Friday afternoon, almost sundown, the show must go on and I have to get over to St. 282.

Seeing, Hearing and Speaking No Evil: On the Propaganda Tour in North Korea