My father has never been a teller. We talk for hours about the importance of journalism in a democratic society, the music of the 60s, 70s, and 80s, or whether Prot from the 2001 film K-PAX is an alien or not. But he never brings up his personal achievements or difficulties for the family. He mentions when he gets prestigious journalism awards, and did not tell me himself that we were going to be living a part from each other when he was about to be sent off to the Ulsan KBS station about six years ago. And this time, I had to hear from my friend at a band gig one day the rather shocking news that he had quit KBS.

My father apparently did not care to counsel or at least notify his oldest daughter before leaving a national broadcast station that he had been working for for almost 30 years since his graduation from college. But, yes, that was my typical dad. Yet it certainly was not the “I can’t stand this anymore!” kind of quitting.

Over the past few years, the situation in Korean media has worsened. The government control of the media has only gotten stronger. Big corporations that own newspapers were allowed to own public broadcast stations and the media mainly covered sensational or happy news while avoiding controversial and important issues that really mattered. Numerous more conscious journalists went on strikes against their companies that were failing to keep their journalistic integrity and, as a result, were fired or moved like my father was several years ago. The public was getting angry with the media for failing to inform the society of what is going on in this world, and craved for something new, something else.

While he was in Ulsan, my father not only got a doctorate degree in journalism by studying the current situation of media, but also gathered journalists who shared the same journalistic creed to prepare for something that had not been tried before in Korea. He started the first non-profit organization specialized for investigative reporting in Korea called Korea Center for Investigative Journalism (KCIJ) or newstapa.

It all started like this: During the new presidential election period in late 2011, when the traditional media was failing to cover crucial issues surrounding the election, professional journalists separated from the traditional media led by my father who started producing news showing in-depth investigations and alternative perspectives on important issues regarding the election with uploaded videos on Youtube. The alternative media was phenomenal and grabbed attention from the frustrated public sick of traditional media. The victory went into the hands of the conservative party again in 2012 nonetheless, and Park Geun-hye, the daughter of former dictator Park Chung-hee, became the new president.

However, the movement was not just a spark that quickly faded. The organization that produced the investigative reporting on Youtube and with podcasts took the name KCIJ, and got more organized to become more professional. My father, who had started and led the new movement, quit KBS in 2013 and officially became the director and chief editor of the center. KCIJ got an official studio and office, opened up website, recruited more people, and became a weekly online news organization. It was a revolutionary organization for many reasons. First of all, it is an alternative media not rooted in the traditional television broadcast or print system, but an online-based media. Also, it is a non-profit journalism organization that does not get any commercial advertisement, and is only funded by the viewers. Moreover, it is the first media outlet in Korea that specializes in in-depth investigative reporting. This somewhat experimental media, armed with veteran journalists who have been working in the field for decades and the journalists of a younger generation with new ideas produced news with in-depth investigation and coverage on important issues that the traditional media failed to even mention. And contrary to some assumptions that non-profit news organizations can’t sustain themselves, with massive support of the 30 thousand donators and other citizens, KCIJ has become an innovative and important news organizations.

During and after the election, KCIJ ran an in-depth investigative series on how the police and the National Intelligence Service had been meddling in the presidential election by forming a group of agents just to post massive numbers of tweets and comments on influential websites praising the then presidential candidate Park or bashing the opposing candidates. Disclosure of such serious meddling in the presidential election by the government led to the police and prosecution’s stronger reinvestigation into the matter. Last year, KCIJ collaborated with International Consortium of Investigative Journalism on exposure of offshore tax evasion project. With ICIJ, KCIJ disclosed how the country’s various influential people including politicians, corporate owners, educators, and entertainers abused loopholes in the tax law to deceive the public and 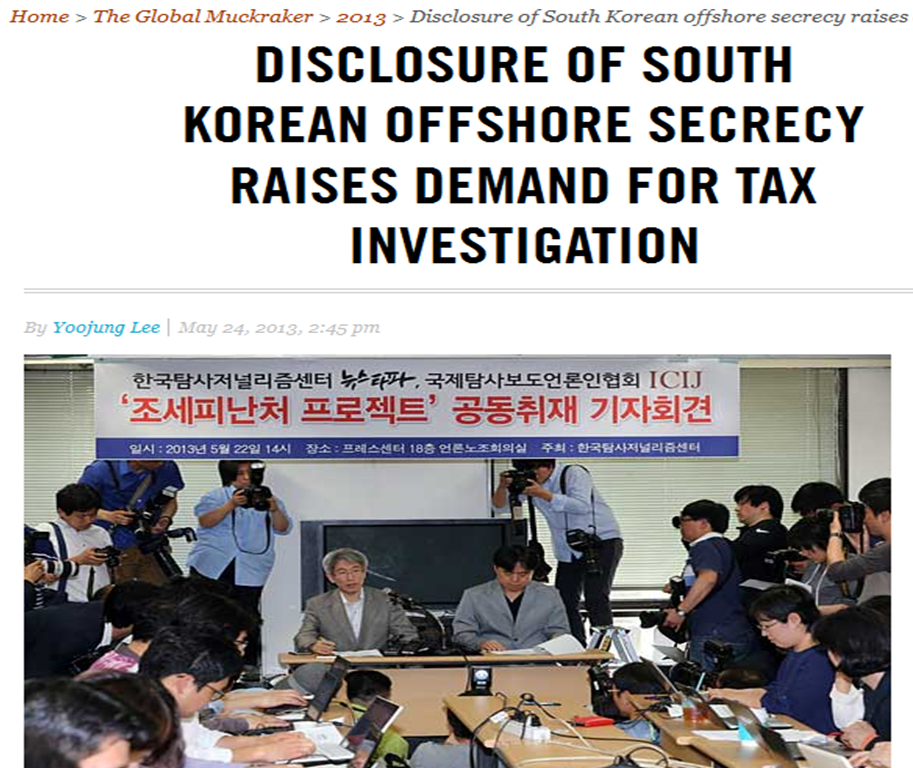 escape from paying enormous amounts of taxes by creating numerous paper companies abroad. Among the people was the son of the former dictator Chun Doo-hwan, who had been avoiding paying reparative costs saying that he only has 290,000 won (and yet mysteriously his entire family lives an extremely luxurious and extravagant life), and this exposure shed light on how the criminal had been hiding his money. This again was remarkable and led to the prosecution’s reinvestigation on this matter. KCIJ and my father, who led the organization, swept numerous prestigious journalism awards last year, and the Center is continuing on with its special role in the society with massive support from the public. My father is incredibly busy working for KCIJ as well as teaching journalism at a university. He sometimes stays up for days, but is more incredibly happy and proud of what he does.

And, of course, I wasn’t just idling around while my father was quitting his lifetime job and shaking the whole nation by starting something revolutionary. I too had taken a great leap forward of my own: entering a college. After years of preparing for college, I finally came to the University of Missouri, Columbia, aka Mizzou. Mizzou is not the most well known American school among Koreans, but its journalism school is undoubtedly one of the finest in the world. During the first semester at Mizzou, I studied the principles of American journalism, the roles and importance of journalism in a democratic society, and journalistic creed. “Journalists’ role in a democratic society is to inform the public so that the public can make the right choices and self govern,” states “Craft in the Principles of American Journalism,” the textbook I used for the class, and this rang my heart and again reminded me what I want to do when I go out there in the near future. Outside the classes, I got to attend a master class lectured by Charles Lewis, the renowned investigative journalist who started the Center for Public Integrity and International Consortium of Investigative Journalism, who came to Mizzou as a recipient of the Missouri Honor Medal, which is given by the Missouri School of Journalism to journalists around the world who seek to fulfill journalistic roles. I was even invited to the medal 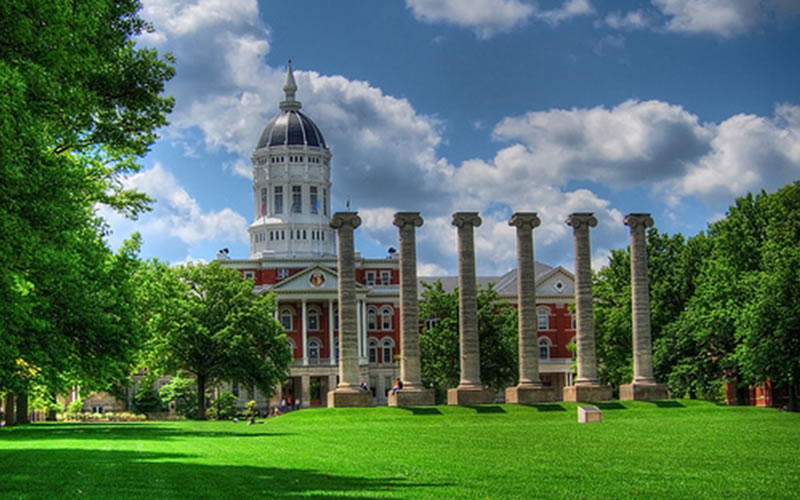 awarding ceremony as the Walter William Scholar of the journalism school, and got to talk to Dr. Lewis in person about investigative journalism. The whole experience was immensely inspirational. But journalism isn’t the only thing I study here. I have been taking many humanities classes like arts, literature and history to build a broad perspective and deep understanding of this world.

Nowadays, journalism can mean so many things: writing short daily bits as fast as possible, finding exclusive stories about celebrities, producing news with flashy and mesmerizing images or writing with fancy and ornate styles, and producing sensational and entertainment oriented programs for the highest ratings. However, I think that journalism holds its true value when reporters dig into issues thoroughly, act as a watchdog against those in power, let out the voices of the unheard, and build an “informed public.”

Over the years, while preparing for college, and actually studying journalism in college, I have found the kind of journalism I want to pursue and what kind of journalist I want to become. I successfully finished my first semester as a journalism student last year, and I now am planning on finishing this semester successfully again and going into the investigative reporting and watchdog journalism emphasis area next semester. The majority of the journalism students choose strategic communications and public relations emphasis, and I hardly see any watchdog/investigative journalism students here, which kind of shows how tough the field can be. However, I am determined about what I want to do. Seeing a father and a journalist like mine, how can I not be? I will continue to stand, step forward and fight my way to pursue the spirit and conviction that my father always taught me, remembering journalists’ role and responsibility.

Soo Rin Kim is a freshmen at the University of Missouri, Columbia. She is studying journalism and will enter the investigative journalism program next fall. Her last piece for 3WM, The Making of a Korean Journalista, was published in 2011.