HomeKorean LifeLooking at the Korean Uni Experience after 12 Years in the U.S.

Many of my American friends ask me about daily life in Korea, a place that has gone from one of the poorest countries in the world to the most dynamic over the past 50 years. Likewise, many people in Korea wonder what the difference is between Korean university life and the one in the States. Hence, I have decided to provide a deeper insight of Korea, as someone who left Korea at the age of 7, spent 12 years attending school in the States and returned to attend university in Seoul.

Before I entered the Hankuk University of Foreign Studies, I tried to find people online and offline who are in the same situation as I am, but it was quite difficult. And sometimes, I felt the regret of sacrificing my twelve years of education in the U.S. to come here to Korea. In fact, my friends in the States always told me to stay and continue my education there. Some of them have even hurt my feelings by telling me to go anywhere in the world except Korea, because of the harsh alcohol culture.

Regardless, I cannot give a straight black and white answer. Some of their statements might be true, but most of them were from people who have never experienced Korea, and in order to find out if these negative statements were true, I came to experience it for myself. Although I have found the alcohol part to be partially true, I find Korean culture to be fine, a mixed feeling of both good and bad. Korea is just like any other country around the world. The only thing that I found noticeably different was the culture. Socializing and studying at a Korean university, I find people wearing shiny hats, expensive watches, wearing colored dresses (females), and more. Although it is not a requirement to be a fashion-guy, it is one way to attract other students in Korea. I know some American friends at my school who get ‘secretly’ cursed by other people around them for the way they dress. This is one way to notice that you are not following the standards of the school.

One thing that foreigners are jealous of who study in America is that the students are individualistic. Nobody really cares about how you wear your clothes or what you do as long as it does not offend the other person. Whereas in Korea, it is important to consider other people as one part of you. So, to all foreigners or Korean Americans in Korea, I do not recommend you wear pajamas, and bring a huge backpack filled with five books to the classroom. Your Korean friends will feel embarrassed to talk to you, although they may never tell you they do. Even if they don’t feel that way, Koreans want to interact with people who have the same attitude, fashion, and possibly, thoughts. It really depends on the person, because I actually met one female student majoring in mass communications who dreamed of having a boyfriend who wears casual clothes and just lives a casual American life–but I find this case to be rare.

Does this necessarily mean that Korea is bad, and that you are restricted from making your own social decisions? Definitely not, but I am saying that you should change yourself in order to join the “Korean bubble.” And make sure not to get the wrong intention without following these steps. Some think that they can show off their English in order to get more attention from other students. That is not necessarily false, but you are getting more people for the wrong purpose. In this case, they tend to want you to improve their TOEFL or TOEIC scores by interacting with you in English, but that is not getting mixed into the Korean culture. Instead, you are separating yourself from others, and they are simply calling you for help when they need it. A Korean guy that I met from another university told me not to hang around with other foreigners because, he said, “they will not be your real friends,” which I was a little offended by (and what does “real” mean anyway). Anyhow, you should follow these steps, and focus more on yourself to get a positive view from Koreans.

I advise foreigners to visit Korea, because it is a fantastic country, and if you are in Korea, I think you should hang out with Korean friends more often. This is not just to improve your Korean, but to make connections where you probably will stay for a long time. I know foreigners that are studying in a Korean university after which they want to find a job here.  And that requires knowing people, which is one element to success when it comes to career. My university professor in business told me that he would never have gotten this position without the help of his friend, whom he knows through a personal connection.

You might need to get a hands-on experience here before you heed my words, but the last part that I need to mention is membership training (MT), which takes place in both colleges and Korean companies. The purpose of the membership training is to bond with people whom you will interact with inside the college and company. If you don’t know them, even though you work with them, it can be a little awkward sometimes. So, in order to alleviate that, they have created the membership training. Plus, it’s a good way to know about the organization before you actually begin. In college, you first join the club, and then, you get a notice from the leader of that particular club to participate in the training, where you will visit the countryside of Korea, and play around inside a small pub or some random reserved space.

One thing that might scare you, though, is what you might actually do during the membership training (MT). When you hear the word “training,” you might think that you are going to actually learn about the program by doing activities to get more information, and to get used to the company or the things that you will be doing inside the university club or classroom. Unfortunately, that is not what happens. You can simply think of it as a Korean party, where you drink a ton of alcohol and play games using the beer and/or soju. In terms of days, it depends on the type of club you join at your school, and the type of company that you work in. However, it tends be around one to two days. So, to all new members of Korea, I hope that you learn the games before you actually go to the MT. Don’t be scared though, because they will kindly teach you if you don’t understand, and if you cannot play the game at all, they will kindly ask you to wait until the next game, which won’t take that much time. Some of the games  you must know are things like “369,” where you will clap your hands whenever the end digit of the number starts with three, six, or nine, or “Baskin Robbins 31” where each person can count up to three numbers starting from 1, and whoever calls the number “31” at the end of the game has to drink, or the “Subway Station” game where a certain subway line is chosen and participants must name stations on that line; anyone who can’t must drink.

I often think about the length of time one spends in college as it seems short, but at the end of the day, it is all up to you. It is really how you look at it and what you make of it, and I am doing all that I can to make my college life effective and educational. Drinking alcohol, I believe, is one cultural behavior you must learn before you join a Korean company, or work under a Korean boss. In addition, recognizing the messages your fashion style sends, knowing the potential benefits and pitfalls of certain types of relationships, preparing yourself for Korean “bonding” and, overall, keeping your mind open in a different culture will serve your adaptation well.

Born in Korea, Jun Won Lee moved to the U.S. when he was 7 and attended 12 years of school before retuning to attend Hankuk University of Foreign Studies in Seoul. He is a sophomore. 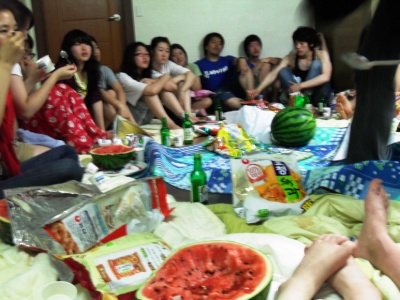