I was born a girl and was treated as one. People gave me complements, calling me cute and pretty, mostly, I think, out of courtesy. A great part of my wardrobe consisted of pink clothing with accessories like hair ribbons and bracelets. Beautiful princesses, queens and fairies appeared in storybooks I got for my birthday. I was dressed in fluffy colorful dresses for kindergarten talent shows.

I was also expected to behave like a girl. And so I did. Or, at least I thought I did. I played with Barbie dolls, loved experimenting with those glittery make-up kits for children, and threw fits when my mom didn’t dress me up in skirts or dresses. My dream at the age of 5 was to become a princess, just like ones from Disney movies I watched or the storybooks I got–a memory to which I still cringe to this day.

Fast-forward 10 years to me in 8th grade. That’s when I took a bite out of my fruit of knowledge. Bittersweet and tough to chew, the fruit widened my vision, and I started to see the unseen. Confusion from the past suddenly started to make sense. I wasn’t who I thought I was. It didn’t make sense that I used to love the color pink, a color which I loathe and avoided at 15. It was as if my entire childhood was a lie, a lie that had been suppressing my true self. It occurred to me that everyone I met never hesitated to tell me how boyish I was. I noticed that I had different interests compared to other girls. I didn’t even know if I wanted to be referred to as a girl. Adolescence is hard enough for “normal” kids. More so, when one is confused about sexuality. In the whirlwind of these thoughts, I wondered if my parents would disown me if I spoke about these things.

The “fruit of knowledge” was, in my case, an Internet comic explaining to its readers about transgender people. According to the comic, transgender didn’t necessarily mean people who had gotten the surgery to switch genders. The term could refer to people who don’t feel that their real gender is the same as their biological one. A straight transgender (e.g., a straight woman trapped inside a man’s body) might be confused with a gay person, whereas a “gay transgender” (e.g., a gay man trapped inside a woman’s body) would be thought of as a “normal” heterosexual person. 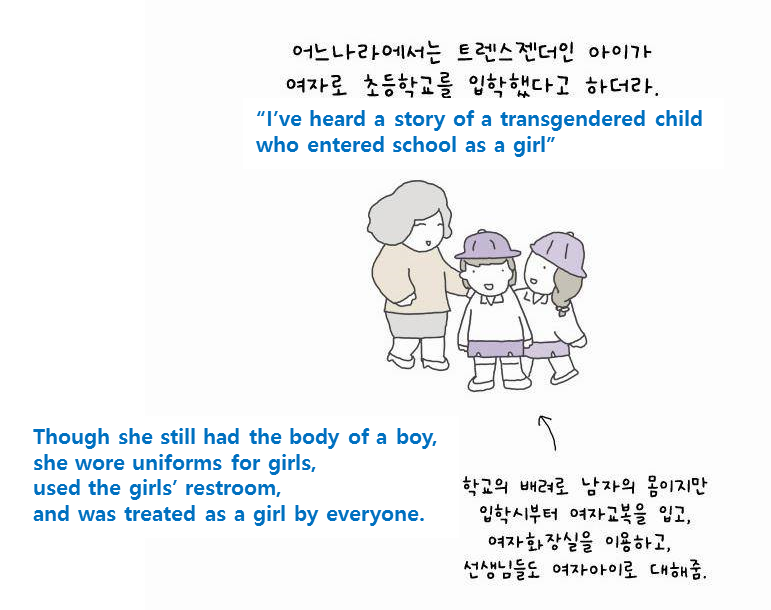 Up until 8th grade, when a few people commented on the oddity of my behavior, I thought that I was merely a tomboy. After similar comments continued, I started to reconsider–maybe they were based on the truth. People didn’t see me as just a girl. Boys my age thought of me as a fellow guy friend who could give them advice on understanding girls. I had people tell me that I walked like an ajeossi, and that I should walk more like a girl. I surely didn’t feel like a girl, but was compelled to be one in order to “blend in” and stop the comments from going viral. I was a “dudette.” Girls approached me because I looked like a fellow girl yet I had the urge to draw away from them and join the boys.

These are some things I had observed about myself:

And this is where things get complicated:

I always imagined if all the things I thought I know about myself are merely deceptions, and thought of the moment when I would finally open my eyes and see my real self. This was that moment. And it wasn’t as glorious as I thought.

I started to wonder if I was actually a gay man with the body of a woman. I sometimes wish I hadn’t read that serial cartoon, that I hadn’t taken a big bite. I wish I would have been left to believe that I was just a straight girl who happened to be a tomboy.

That thought bugged me, and triggered my long-lost memories. The memories all made sense now. In kindergarten, aside from dressing dolls up, I also loved playing with boys, assembling robots and Legos, having spin-top battles. In elementary school, I wrestled with boys and pulled pranks on people using rubber spiders, plastic cockroaches and live insects. In middle school, a girl in my class called me “a boy dressed as a girl.” Many girls felt awkward playing with me, and vice versa. While most girls exchanged celebrity-related gossip and concentrated on Photoshopping selfies, I was more interested in building rapport and crushing other teams in mobile games Detaching oneself from the group of one’s gender and mingling with the other is an abnormality frowned upon under traditional Korean norms, especially as a young teen. But I never felt the sense of belonging in a circle of girls. I was odd. Everyone thought that way. I felt that way. But nobody knew why. Until now.

After more contemplation and research, I think that I’m simply genderfluid. On the web, I found that there were others who have similar worries about the same, gender-related issue; people who are just like me, who face similar contradictions between the two genders in the body.

“I felt like I should be male and wished that I was. When I finally told my parents they somehow talked me out of it. Henceforth, I felt female again. The thoughts never left, however, and I still feel the want to be male. But I enjoy being female at the same time. Some days I enjoy the idea of having a female body and persona. But other times when I’m around boys – as I have been for most of my life – I wish I was one. I act like one and dress like one. Even when I’m around girls I feel the need to be more male to impress them….”

“Labelling my gender in any given moment feels a bit philosophical. It’s like saying the sky is blue; how do we know that we are all seeing the same blue, experiencing the same sensation when looking at the sky? Maybe what we both call ‘blue’ is the sensation of green for me, but orange for you, and how would we ever know? I feel the same way about gender often. I feel a gender that makes me want to wear dresses and go in the women’s restroom, and I call it ‘woman.’ But how do I know that my “woman” is the same as anyone else’s ‘woman?’”

“I, physically a woman, look nice in dresses and clothing that highlights my feminine features (or so my friends claim) but I feel like a drag queen.”

In Part 2 the author writes about her life as a Korean high school student wrestling with gender identity in a society that largely ignores, vilifies and/or suppresses such issues.

Why Is Researching Korean Culture Easier in Japan?