For foreigners following Korean presidential politics, the last few years have been rather bemusing. When you ask most Koreans about the state of affairs, they too usually express a mix of bewilderment at how major events have been handled from the deeply tragic sinking of the Sewol ferry and the mismanaged MERS outbreak to the collapse of the shipping industry. Much of it just doesn’t make sense on several levels but mostly when considering rational reactions. Something has just seemed off, out of sorts, awry in a Wizard-of-Oz way.

And then, over the past 10 days or so, things entered the realm of stranger-than-fiction with the emergence of “Rasputin,” “Eight Fairies,” a cult kook who spoke with the dead, a dressage rider who rode right past college admissions, and a president who knew them all.

Choi Soon-sil-gate, as it is now known, has transfixed and bewildered the nation to no end. And there is no end in sight even though, to almost everyone’s surprise, the woman behind the “gate” suddenly returned to the peninsula from Germany despite, days earlier, saying she was too ill to travel and did not intend to return. Her return epitomizes the confounding qualities of this unfolding Korean drama–there she was in a purple parka and shades, pulling her carry-on through Incheon Airport, passport in hand (a passport the government had said it was considering suspending to hasten her extradition), just like any other traveler. No one expected it but there it was in living color. Meanwhile, the calls for President Park Geun-hye to resign are increasing with each passing day as people wait for the next piece of this perplexing puzzle to emerge.

With all of this in mind, 3WM wanted to provide a deeper Korean perspective with some insight into the origins of this strange saga. Our source has been answering questions about Korea for years and provides a rather comprehensive and cogent overview of this mind-boggling spectacle. This post originally appeared on the Ask A Korean blog and T.K. permitted 3WM to run part of it here with some minor changes and additions. 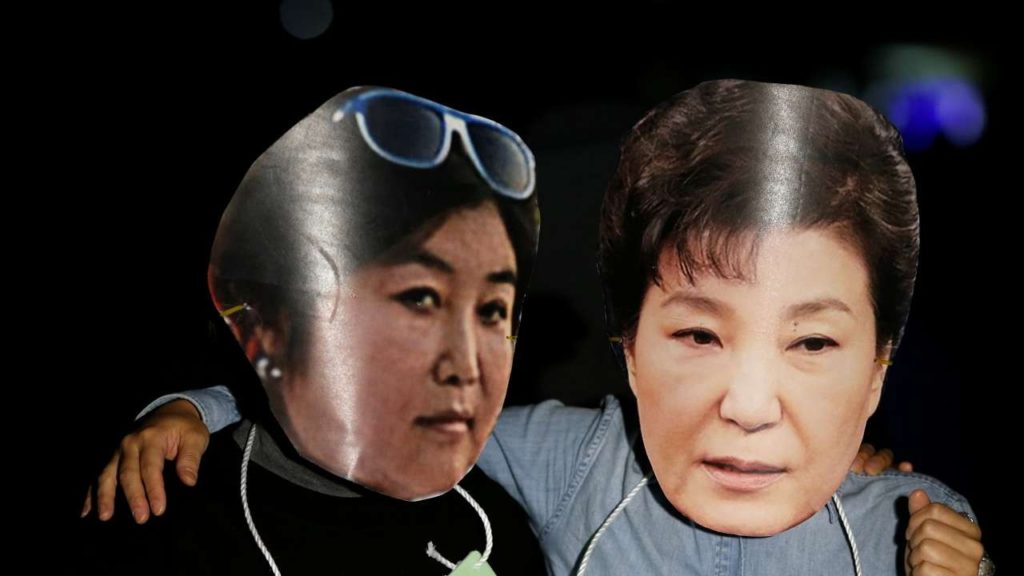 President Park Geun-hye is in deep trouble. The stories have been out for a few days now, and even the English-language magazines  and papers have caught on. Park’s confidant has been running a massive slush fund, as she extorted more than $70 million from Korea’s largest corporations. The confidant was also receiving confidential policy briefings and draft presidential speeches–all on a totally unencrypted computer. The confidant rigged the college admission process so that her daughter, not known to be sharpest tool in the shed, would be admitted into the prestigious Ewha Womans University. That last bit turned out to be the first step toward the president’s ruin, as the Ewha students’ protest over that preferential treatment developed into the larger investigation about the relationship between Park and her confidant, Choi Soon-sil.

But the English language coverage of this scandal is missing something. The newspapers do have most of the facts, which they recount diligently, but they fail to fully account for the Korean public’s stunned disbelief. Although the scale of the corruption here is significant, Koreans have seen much, much worse. Not long ago, Korean people have seen Chun Doo-hwan, the former president/dictator, made off with nearly $1 billion, and this was back in the mid-1980s when the money was worth more than $4 billion in today’s dollars. Even the democratically elected presidents of Korea–every single one of them–suffered from corruption charges. Lee Myung-bak, the immediate predecessor to Park, saw his older brother (himself a National Assemblyman) go to prison over bribery. Lee’s controversial Four Rivers Project, which cost nearly $20 billion, was widely seen as a massive graft project to push government funding to his cronies who were operating construction companies.

For better or worse (mostly worse,) Korean people have come to expect corruption from their presidents. So why is this one by Park Geun-hye causing such a strong reaction? It is not because Korean people discovered that Park was corrupt; it is because they discovered Park was irrationally corrupt. Koreans are not being dismayed at the scale of the corruption; they are shocked to see what the scale of the corruption signifies.

Park Geun-hye’s corruption scandal revolves around a central question: why would the president risk her administration for Choi Soon-sil? In fact, one of Park’s selling points as the presidential candidate was that she was less likely to be corrupt because she had no family. Her parents–former dictator Park Chung-hee and his wife Yuk Yeong-su–were dead, and she was estranged from her sister and brother. This argument had a modicum of plausibility, since all the previous president’s corruption involved their family in some way. (Kim Young-sam and Kim Dae-jung had issues with their sons; Roh Moo-hyun and Lee Myung-bak, their brothers.)

But the lack of family did not stop Park Geun-hye from being corrupt, because she apparently had to give money to Choi Soon-sil. But why did Park Geun-hye, the president, even bother with Choi Soon-sil, a nobody? To answer this question, we must look back into modern Korean history to trace the relationship between Park and Choi.

Park Geun-hye met Choi Soon-sil through Choi’s father, Choi Tae-min. The elder Choi, born in 1912, was a pseudo-Christian cult leader. He started his adult life as a policeman and soldier, and at one point he worked at a small newspaper and a soap factory. By 1970s, Choi was fully engaged in the occupation for which he would be known: being a cult leader, claiming to heal people. Choi called himself a pastor, but he never attended a seminary.

Choi Tae-min met Park Geun-hye for the first time in 1975, when Park was 23. Park Geun-hye had just lost her mother, who was assassinated by a North Korean spy. (The spy was aiming for Park’s father, the dictator Park Chung-hee, but missed and killed the first lady instead.) Shortly after the assassination, the elder Choi sent several letters to Park Geun-hye, claiming that the soul of Park’s mother visited him, and Park could hear from her mother through him. Park invited Choi Tae-min to the presidential residence, and the elder Choi told her there that Park’s mother did not truly die, but merely moved out of the way to open the path for Park Geun-hye. This was the beginning of the unholy relationship between Park Geun-hye and Choi’s family, which included Choi Tae-min’s daughter Soon-sil.

Once the elder Choi won Park Geun-hye’s confidence, he leveraged the relationship to amass a fortune. Choi set up a number of foundations, with Park Geun-hye as the nominal head, and peddled influence. The influence-peddling and bribery became so severe that the dictator Park Chung-hee summoned Choi Tae-min to personally interrogate him. In the interrogation session and thereafter, Park Geun-hye would fiercely defend Choi, her spiritual guide and connection to her dead mother. In a Wikileaks cable from 2007 when Park Geun-hye first ran for president, the U.S. Ambassador to Korea noted: “Rumors are rife that the late pastor had complete control over Park’s body and soul during her formative years and that his children accumulated enormous wealth as a result.”

Choi Tae-min’s high times ended on October 26, 1979, when his patron lost her father in another assassination. (Fittingly, Park Geun-hye’s own downfall began around October 26 of this year.) The assassin Kim Jae-gyu, then-head of the Korean Central Intelligence Agency, said one of the reasons why he decided to assassinate his boss was because of the toxic relationship between Choi Tae-min and Park Geun-hye. Although Park Chung-hee was fully aware of Choi Tae-min’s grafting, the elder Park let it continue for the sake of his daughter. Kim believed that this was another indication that Park Chung-hee was losing his marbles.

For the next decade, Park Geun-hye and Choi Tae-min were removed from politics. The assassination of Park Chung-hee led to another murderous dictatorship, this time by Chun Doo-hwan, then finally democratization in 1987. During that time, Park operated several charitable foundations, which were in reality no more than private slush funds made up of the money that Choi grifted during her father’s reign. Park Geun-hye became so dependent on Choi Tae-min that she would become estranged from her remaining family, her sister Park Geun-ryeong and her brother Park Ji-man. In 1990, Park’s siblings went so far as to petition then-president Roh Tae-woo that their sister be “rescued” from Choi Tae-min’s control.

Choi Tae-min died in 1994, at which point Park Geun-hye’s confidence moved to Choi’s daughter, Soon-sil. Park entered politics in 1997, winning her first election as an Assemblywoman in 1998. She would prove to be a competent politician, earning the nickname “Queen of Elections.” She lost in the presidential primaries to Lee Myung-bak in 2007, but came back strong to win the nomination and eventually the presidency in 2012. Although Park’s relationship with the Choi family briefly became an issue during her two presidential runs, she dismissed them as baseless rumors, claiming that neither Choi Tae-min nor Choi Soon-sil was involved in her works as a politician.

As it turned out, Choi Soon-sil owned Park Geun-hye just as much as her father did. Peddling the presidential influence, Choi extorted tens of millions of dollars from Korea’s largest corporations. When they found a small and profitable company, Choi’s cronies would straight-up steal it, threatening the owner of the company with the company’s destruction and personal harm. More importantly, Choi effectively controlled the presidential power. Every day, Choi would receive a huge stack of policy briefs from the presidential residence to discuss with her inner circle–an illustrious group that included Choi’s gigolo (no, really) and a K-pop music video director (I’m serious). Choi would receive ultra-confidential information detailing secret meetings between South and North Korean military authorities. Choi would receive in advance the budget proposal of more than $150 million for the Ministry of Culture, Sports, and Tourism, and distributed them to her friends’ projects. Choi went around saying North Korea would collapse by 2017 according to the spirits that spoke to her, and the Park Geun-hye administration may have set its North Korea policy based on this claim.

For years, Park’s aides complained about the mysterious off-line person to whom the president would send her draft speeches–when the drafts returned, the professionally written speeches were turned into gibberish. We now know that one of Choi Soon-sil’s favorite activities was to give comments on the presidential speeches. Even the famous Dresden speech, in which Park Geun-hye outlined her administration’s North Korea policy, had a number of markups from Choi Soon-sil. The aides who dug too deep into the relationship between Park and Choi were dismissed and replaced with those close to Choi, to a point that Choi’s personal trainer became a presidential aide. No, really. I wish I were joking.