The Surreal Solitude and Mind-Boggling Modernity of Nay Pyi Taw

When one thinks of Southeast Asian cities, the usual – and usually accurate – image is of teeming millions struggling to make do with woefully inadequate and/or outdated infrastructure. Many of the region’s capitals (Bangkok, Jakarta, Manila, Hanoi) have become bywords for the pollution-choked, traffic-jammed, beggar-ridden and perpetually flooded Third World metropolis of the twenty-first century – urban centers pushed far beyond their limits on every conceivable level.

Until 2006, the capital of Myanmar – Yangon – perfectly fit that stereotype. A decade later it fits it even more perfectly; but the Golden Land’s largest city and unrivaled commercial center is no longer also its seat of government.

For the past ten years that honor has instead been held by the purpose-built “union territory” of Nay Pyi Taw, some 200 miles to the north, though for all intents and purposes it might as well be on another planet.

Carved out of and paved over a broad plain of rice fields on the orders of Myanmar’s then-almighty junta, which felt itself too exposed in populous Yangon, Nay Pyi Taw is, first and foremost, a vast place. One hesitates to call it a city (though it is officially designated as one), since there are no neighborhoods to speak of in all its seemingly endless square miles, let alone anything which might qualify as a downtown.

Instead, the capital is divided into various “zones” serving various purposes, most of which are quite far from one another and connected by perfectly flat, well maintained eight-, ten- and even fourteen-lane roads with scarcely a vehicle upon them. No public transit system exists, of course, there being effectively no public to use it, so relatively expensive taxi trips are the only option for those without wheels and believe me, you’ll need them.

The few visitors the capital receives will almost inevitably find themselves staying in the “Hotel Zone,” which as its name suggests is a string of several dozen hotels, many of them quite large and all of them apparently empty or nearly so, stretching for several kilometers along a wide boulevard which seems, like every other road in Nay Pyi Taw, to run from one end of infinity to the other. A few restaurants and two showpiece shopping malls can also be found in this area; the latter, though quite modern in appearance and thoroughly air-conditioned, are rather modest in scale by Western standards, which makes good sense since their clientele is extremely modest in scale by any standard.

While malls generally rank somewhere below thumbscrews on my list of favorite things to experience, it was mildly fascinating to wander these retail Meccas – at noon on a Saturday, no less – observing the various pricey imported goods on offer, from ice cream and hair tonic to running machines and George W. Bush dolls, in the company of practically no one.

The half-hour walk back to my hotel in the company of absolutely no one had a distinctly post-apocalyptic feel to it, which after all my years in this overcrowded region I dare say I found most agreeable. Indeed, I’d recommend a visit to Nay Pyi Taw for anyone, local or expatriate, who’s burnt-out on urban life in the Far East. You may, as I did, find it rather painful to leave.

Despite the relative dearth of tourists in Nay Pyi Taw, the capital is not entirely without places for them to visit. A twenty-five-minute, $12.00 taxi ride from the Hotel Zone brought me to Uppatasanti Paya, Nay Pyi Taw’s answer to the far better known Shwedagon Pagoda in Yangon, which despite its evidently shoddy construction (there are plainly visible cracks in the gilding all over the exterior) offers splendid views of the surrounding countryside and, unlike Shwedagon, can actually be entered. The cavernous interior is truly a sight to behold, with its immense and colorful domed ceiling and over 100 friezes depicting the life of the Buddha lining its walls. There are also some royal “white” (actually pink) elephants in a rather miserable-looking pen at the foot of the stairway leading up to the pagoda, and though their existence of swaying to and fro in leg chains while munching on the bamboo their guards toss at them is hardly enviable, I’ve seen worse. 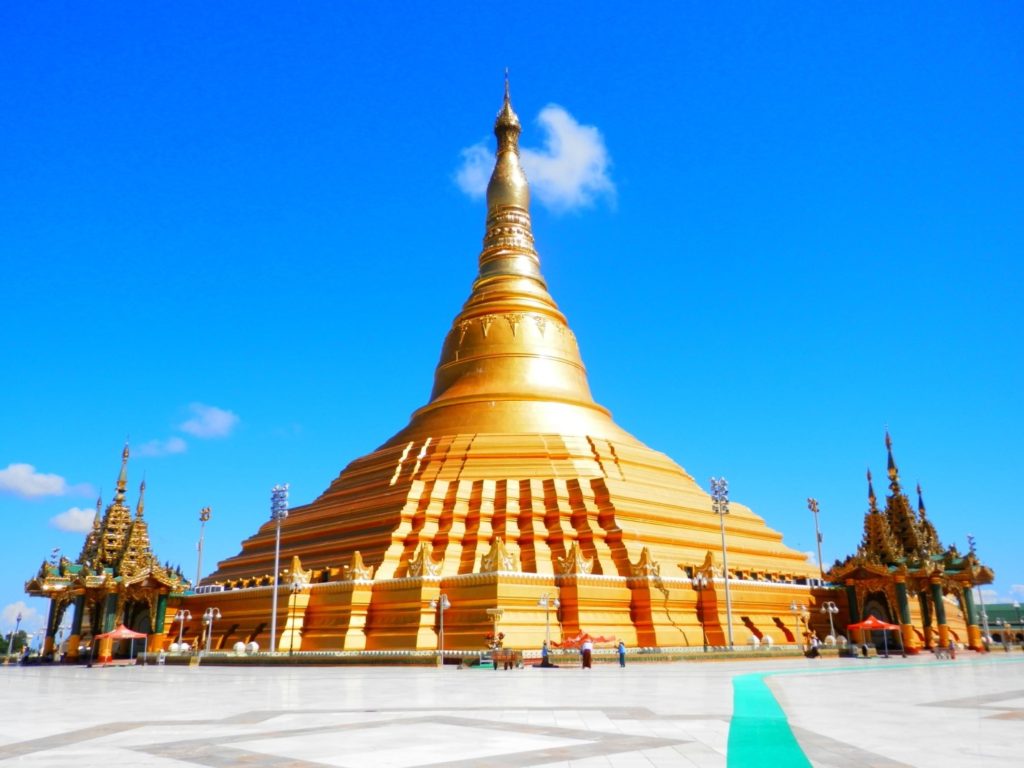 The staff at my hotel having estimated that it’d take me around thirty minutes to walk from Uppatasanti to the National Museum, I decided to forego a taxi ride in favor of some exercise. As it turned out, the walk took nearly ninety minutes, all of that in blazing heat and most of it alongside ricefields populated only by grazing buffalo and farmers who spoke no more English than their bovine charges. (Indeed, the lack of English skills among most of Nay Pyi Taw’s population, including hotel and restaurant staff, is noteworthy; the place desperately needs some ESL teachers.)

I finally did find the museum, however, and entered to find it, like everything else in town, jaw-dropping in scale and almost wholly unoccupied. The exhibits ranged from 40-million-year-old crocodilian fossils to an imitation throne room, with sizable spaces along the way devoted to, among other things, traditional Myanmar arts and crafts, the efforts of local painters, gifts from foreign governments and a celebration of the glories of ASEAN. 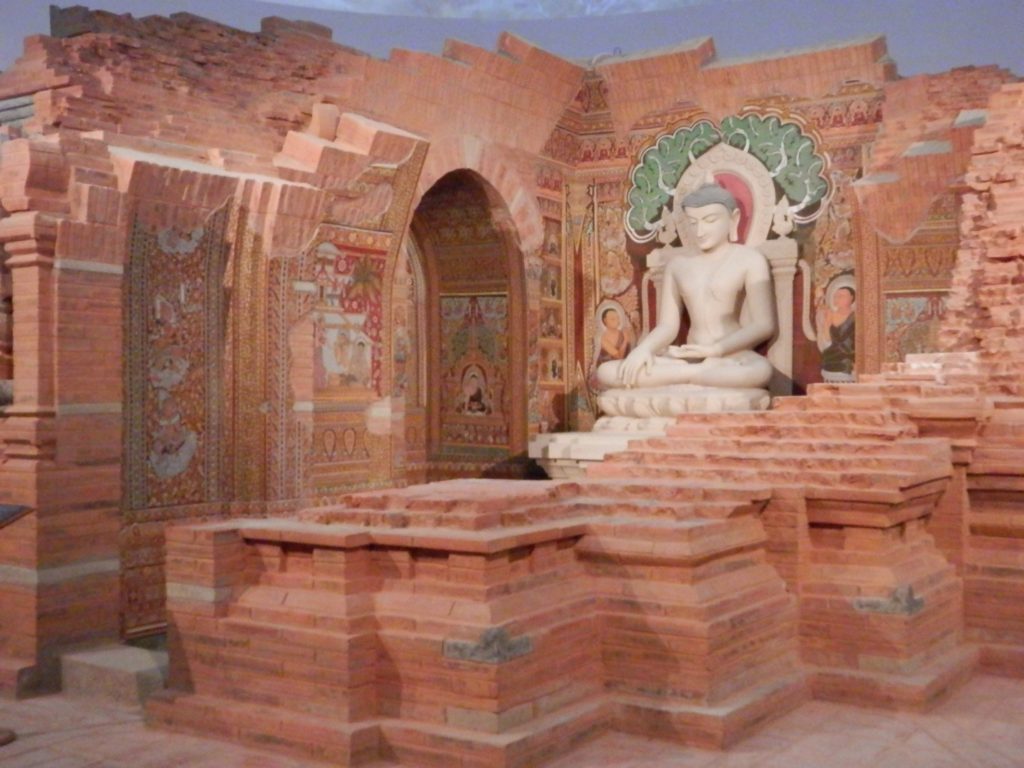 I spent nearly three hours wandering the rooms, the length of my rather painful stroll being driven home for me by the occasional glimpse of Uppatasanti’s distant spire through the museum’s front windows. A few other foreigners appeared at one point in the section covering Neolithic cultures, but for the most part I was treated to an almost private viewing. Closing time came at 4:30, and the security guards were good enough to call me a taxi, which cost $12.00 for the twelve-minute ride back to my hotel.

And now that we’re back there, this seems a good time to talk a little more about Nay Pyi Taw’s infrastructure, which sets the town apart from the rest of Myanmar at least as much as its size and emptiness do. While very nice, mine was one of the capital’s more modest accommodation options; but it nevertheless offered ‘round-the-clock power, satellite TV with crystal-clear reception and a dozen or so foreign stations (including Fox News for a bit of comic relief), and hot water which not only came out of the tap scalding as soon as I turned it on but stayed that way long enough to fill the full-length bathtub. I didn’t use the Internet during my stay, but various sources report that it’s excellent and always available, which is most definitely not the case anywhere else in the Golden Land.

Uppatasanti Paya and the National Museum were the only real tourist attractions I took in during my weekend in Nay Pyi Taw (unless you count the shopping malls), but for those with a bit more ambition and a bottomless taxi budget there are a couple of kitschy theme parks dotting the outskirts of the city, along with a zoo that’s said to be of the classic Asian variety, i.e. heartbreaking. I chose to pass on these options not only for financial reasons, but because just wandering the barely inhabited vastness all around me seemed a worthwhile use of my time in itself. Call it Myanmar perfected or Myanmar denied (or better yet call it both, since both are really the same thing), Nay Pyi Taw is an experience unique in Southeast Asia, if not the world. The only way to sum it up with any accuracy is as a sort of ghost town in reverse – a place haunted not by the spirits of those who’ve left, but by the yawning absence of those who, for all the pristine boulevards and well-appointed hotel rooms awaiting them, have simply never appeared.