Some 90 kilometers south of central Seoul in South Chungcheong Province not far off of Interstate 1 at the end of a narrow, winding road sits the Cheonan Correctional Institution surrounded by tree-covered hills and 3-meter-high concrete walls. Here is where foreigners convicted of crimes under Korean law—more than 700 of them from some 40 different nations—have resided since February 2010 when the South Korean government decided to put all the foreigners in one place to simplify procedures and assuage the loneliness felt by foreign prisoners locked up in far flung prisons among all-Korean populations.

And this is where Pvt. Andre Fisher now passes his days. For more than three months he has called the sprawling collection of 49 buildings on 4.5 million square feet of land home after the Supreme Court of Korea dismissed the appeal of his conviction for aggravated robbery and upheld his two-year sentence. Fisher was first handed over to the Republic of Korea’s Ministry of Justice (MOJ) for detention on June 21, 2011 and will soon be approaching the 10-month mark behind bars.

Per the Status of Forces of Agreement (SOFA) with the ROK, Fisher is housed with only individuals processed by the MOJ for crimes that were, according to the ruling of Korean judges, committed while not on official duty against non-United States Forces Korea (USFK) individuals. As of March, Fisher and eight other men convicted of various crimes live in a 20-room block of the prison.

During a visit to the prison in March, 3WM met with Fisher in an isolated room after passing through one set of security–where IDs were processed and prison passes provided–, then moving across a large yard from one part of the complex to another to a second security check where any electronic devices were confiscated after which a guard led us inside a vacant cell block to a tight corridor where a steel door opened to three middle aged Korean men—prison guards–sitting in a small, square room adjacent to a large window that looked into the room where Fisher sat.

Dressed in a loose, drab-colored, 2-piece prison uniform on top of several layers—the prison was without any noticeable heat on what was an unusually cold day (Fisher said this was normal). An English speaking guard sat in on the visit during which Fisher sat against one wall in an armchair with two 3WM editors against the other and the guard near the door apparently taking notes of what was discussed on a pad.

“I’m working in a factory and doing fine,” said Fisher in response to how he was doing. Fisher appeared much more resigned and removed than he had during visits with him at the Seoul Detention Center prior to the Supreme Court’s decision. “I haven’t seen anyone from my unit since the first day I came here,” said Fisher regarding the people he’d served with and under. He explained that USFK officials bring food each week to the prison for the inmates—the SOFA prisoners cook their own food in a communal kitchen while other foreign inmates are served prison food. “But the food is limited,” said Fisher, explaining that the amount is insufficient for the number of men. “We end up having to eat less than we normally would because they don’t bring enough,” Fisher said. According to Fisher, the military delivers fruit, vegetables, meat and condiments which the soldiers 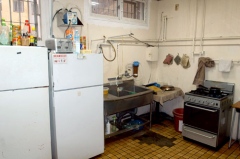 have to fix into meals. “We have to decide what’s on the menu,” said Fisher.

SOFA prisoners are woken at 6 a.m. and can spend their days in different ways—Fishers’ factory job making plastic products runs from 8-5 p.m. Inmates are not required to work but Fisher said it helped pass the time and could earn good behavior marks. Fisher, according to USFK authorities, is scheduled to be released on July 9, 2013 but he expects to get out several months earlier, though he said he had not been advised about any details yet. “I think I could be out in February from what I’ve heard in here but really I have no clue because they haven’t told me anything,” he said.

USFK officials said they are not in control of the process as it is under Korean jurisdiction and thus they cannot comment on issues such as early release. The MOJ refused to comment on a prisoner’s sentence beyond what the court issued. “Two years is two years,” said one MOJ official who spoke on the condition of anonymity.

When he’s not working, said Fisher, he works out in a rec room that has free weights and other exercise equipment. “It’s a lot better than the Seoul prison where I was let out one hour a day,” he said. Each SOFA inmate also has his own cell and is able to watch DVDs—Fisher said he’d received DVDs from friends and family—and read books from in the prison and those sent or dropped off by visitors. Asked what else he’d been up to, Fisher said, “I’ve been writing raps in my spare time and when I get out of here, I’m going to try to record some back home.”

Serving time with Fisher is a multifarious group of men:

1)Pvt. Lloyd A. Daniel, who was convicted of robbery and rape, robbery resulting in injury and larceny, and sentenced to seven years. He arrived at the prison July 20, 2011.

2)Pvt. Derrick K. Derrick, who was convicted of a violation of the Act on the Control of Narcotics, obstruction of performance of official duties and infliction of bodily injury and sentenced to one year. He arrived at the prison February 8, 2012.

3) Pvt. Kevin L. Flippin, who was convicted of violation of the Act on Special Cases on the Punishment of Sexual Crimes (special robbery, rape and bodily injury resulted from rape) and sentenced to 10 years. He arrived at that prison October 6, 2011.

4) Pvt. Antonio M. Magana who was convicted of robbery resulting from injury—he stabbed a taxi driver—and sentenced to six years. He arrived at the prison on December 8, 2011.

5) Pvt. Abdelkader Raoufi who was convicted of attempted murder and infliction of injury with a dangerous instrument and sentenced to five years. He arrived at the prison on December 10, 2009.

6) Pvt. Michael S. Williford who was convicted of an indecent act upon a minor, larceny, DUI and destruction of property and sentenced to three years and six months. He arrived at the prison on August 23, 2011.

The other two individuals, according to USFK officials, are civilian contractors—the officials said they did not have specific information on the individuals at this time. Fisher said that one of the men was a Korean contractor under SOFA who was serving six years for attempted murder. 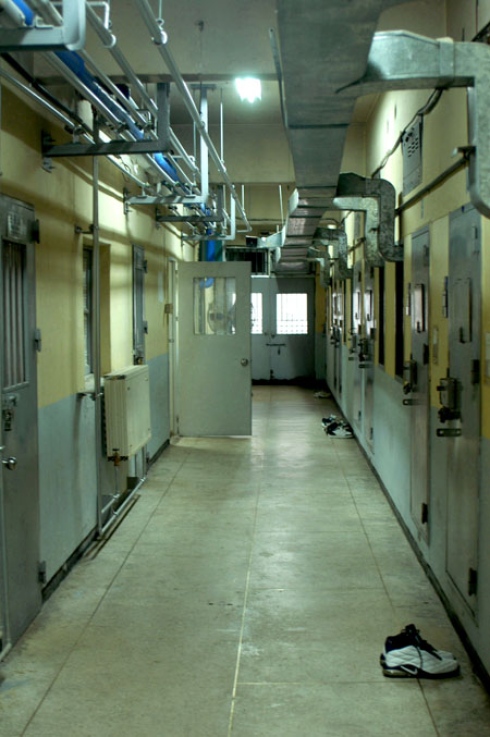 Fisher said that the other prisoners mostly kept to themselves. “We mostly do our own things,” he said.

Asked if anything had changed about his claim of innocence, Fisher said, “No, not a word of it—I didn’t do it and I shouldn’t be here.” Having been through the reams of legal documents that were not translated, 3WM asked Fisher, again, about the process of his defense. “I told him [lawyer Lee Jang-han] again and again that I needed things translated and he just did as he wanted,” said Fisher. “There were parts that I couldn’t understand and he said it didn’t matter,” he said.

Inquiries to the USFK legal officials about the dearth of translation were met with the following response from Lt. Col. Brad Larson, the USFK’s Chief of International Law: “Also, regarding Lee’s refusal to translate documents, that is not included in the contract or the contract price.” According to Larson, the military pays $7,000 to a Korean attorney for each stage of a soldier’s trial. Translation fees are not part of this so, presumably, each soldier would have to pay for translation of documents that are not readily translated into English. Given that the overwhelming majority of documents are in Korean, it is hard to imagine a private—as most of these soldiers in legal trouble are—raising the large amount of money to cover translation costs, which, according to those familiar with translation and the legal field, can run from 25,000 won and up per page.

Fisher put things plainly: “The military didn’t care once I’d been handed over [to the MOJ] and they’ve forgotten about me now. I don’t care about them anymore after this and I wouldn’t recommend joining the army to anyone.”

Asked about why he joined in the first place, Fisher replied, “Thing weren’t going so well at that time so I thought this would be a good chance to change things.” Fisher said that his first year or so had been good but when he arrived in Korea things started to change. “People started to get on me for little shit—I was a mechanic and sometimes my uniform would get dirty…a mechanic gets dirty, you know,” he said. “Then someone would yell at me for that.” He added that within his unit, the 4thChemical Company of the United States Army, there was bias. “Some people would get called out for stuff while others wouldn’t—people were biased,” he said.

At the end of the 30 minute meeting, 3WM was briefly questioned about our relationship with Fisher: “Are you Army?” asked the guard who’d observed the meeting. When told that we were media, his face broke into a smile and he asked for contact info. All the while Fisher stood in the doorway, a suspicious look on his face, holding his notebook, ready to return to his cell while we exited the facility. And as we walked out of the facility back to the car we again wondered if Andre Fisher really deserved to be staying behind.